The Zwift Racing League is building an amazing community of riders online. Season 3 is under way and it is EPIC. I truly believe Zwift links like minded athlete from all around the world. By joining the Zwift Racing League we will build friendships, have fun and improve our cycling fitness. Each week we will give you a little summary of how our team performed, successes and failures, everything revealed ! Zwift racing is very hard but a ton of fun, which builds communities worldwide. Our two teams consist of people from all around the globe, mainly in Europe but also in the USA and New Zealand !

Surrey Hills is one of the toughest courses on Zwift. The climbs are short but there are many of them and not a huge amount of rest time as you go down those hills at 90 kph! This was always going to be an epic finale to what has been an incredible season 4. The choice of courses in my opinion was spot on. Great variety and something for the sprinters, punchers and climbers. Credit to Zwift and WTRL for organising this brilliant event. Season 3 is over – time to go outside and enjoy the beautiful summer weather ! See you in September for season 4 (can’t wait!).

I want to thank everybody who participated in the Jura Sports teams – your commitment and dedication made me feel so proud. We built an amazing community, we made new friends and our fitness improved. That was exactly the goal and it will continue to be. Of course it’s nice to hear and when people get top 10s, but it’s also great to hear when people fight hard to finish their first race.

Pierre de Coubertin, the founder of the Olympics once said: “The most important thing in the Olympic Games is not winning but taking part; the essential thing in life is not conquering but fighting well”. We took part and fought well. Mission accomplished. Thank you and ride on. 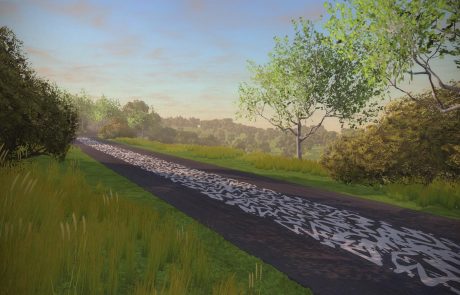 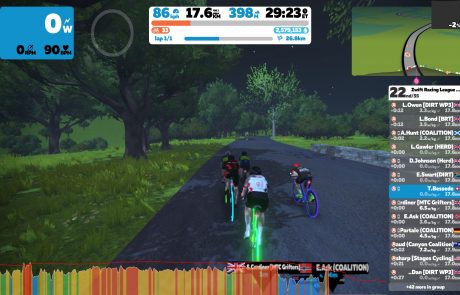 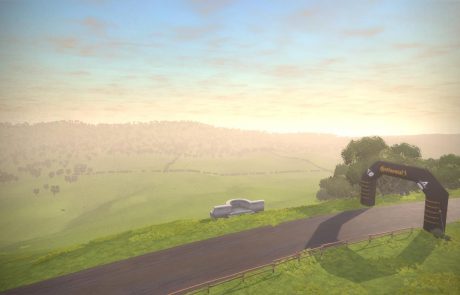 We love a team time trial. There is really an art to master this event. It’s all about the draft and believing in the numbers that you are required to do at the front, but also at the back. The teams who draft the best will save more energy, and therefore have more energy for their front riders, and also be in a much more stream lined position which is exactly what you want in order to be the most aerodynamic as possible.

So how did we do? In short – really well ! I am very proud of the teams tonight. For the first time this season we had a full roster. Three teams of six riders each. This is always a big boost.

Fantastic job overall as we beat our previous time from season 1 by 2minutes ! It wasn’t without drama though. Kaspar led us through the first climb but since he is significantly lighter, the effort required to stay in the pack was greater, so he let us go after 8km. We had to finish with 5 riders and the rotations were going great. About 2km from the end, I had an internet drop which meant I was “blind” and couldn’t see anybody. Luckily we were still 5 as you are required 4 minimum and the 4th rider count. Great job to all the team : Bruno, Stu, George, Blake and Kaspar!

Very strong ride from the team but I am sure we have a lot of improvement potential. The pace at the start might have been too high as we lost already Olivier after the first climb, in a similar way than team A. The pace line was harder and it was more a “pack ride” – we’ll have to train that more often. Alec also had the same connection drop but 5km from the end which meant the end was tough for the 4 men remaining but they kept going strong and crossed the line in 6th position on the day. Bravo Olivier, Alistair, Jamie, Alec, Stefan and Julian !

Great team work – the team is really coming nicely together and paced very well as all riders stayed together and finished with the six as a full team. Great work at the front from Nick, Romain and Daniel, and fantastic effort by Arturo, Peter and Marc to grind out the first climb and help the team on the flats. Fantastic team work. 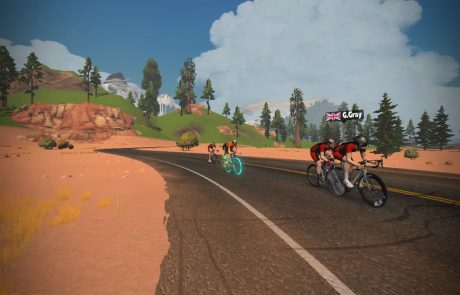 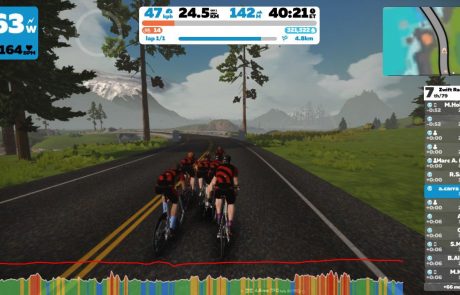 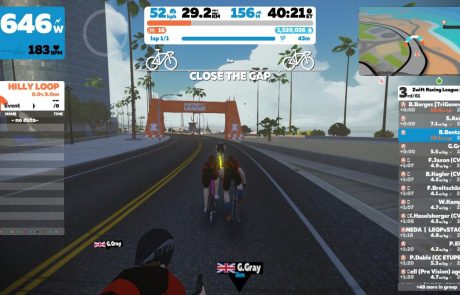 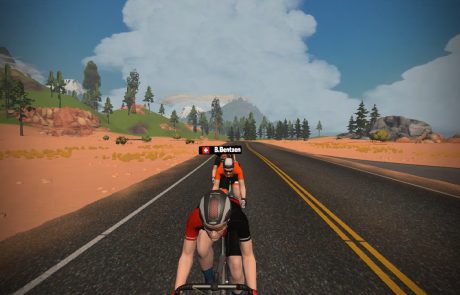 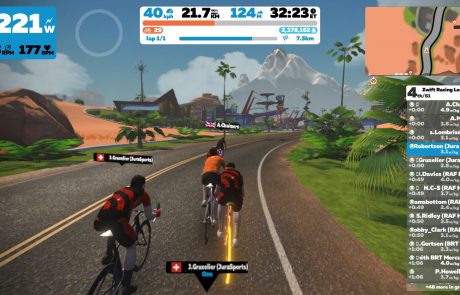 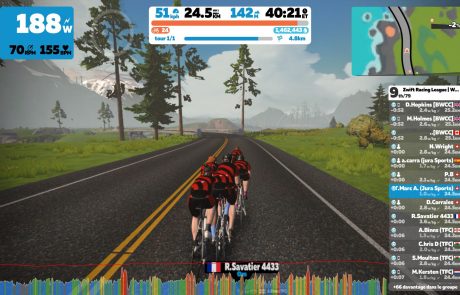 I must admit, Paris is not my favourite world on Zwift… but racing on the Champs-Elysées has that WOW factor – you do feel like you’re on the last stage of the Tour de France competing for the sprints. Well, that’s if you can hold to the first bunch! The pace was incredible last night, in all categories. Most of us blew up shortly around the first sprint, only Nick from team C managed to stay in front pack until the end.

Zwift racing, especially the ZRL is all about your 1min power. You can have the best FTP of the bunch, but if your competitors are faster at sprints and punchier on the small efforts, you have close to zero chance.  I made a video on how to train your FRC – check it out ! I’ve been training my FRC for the last 6 months and it has paid off (7th in New York, 13th in Richmond) – but yesterday it was just the next level of sprint racing.

Well done to all the team members who participated and I cannot wait for next week’s final team time trial ! Ride on. 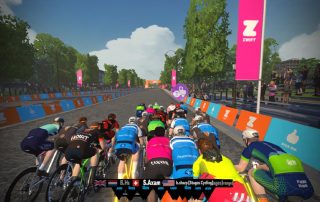 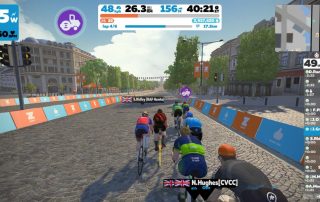 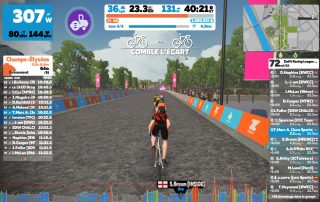 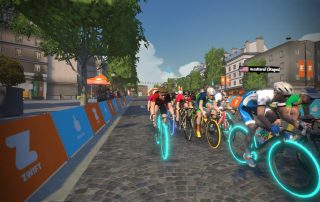 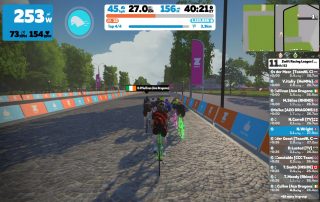 When I saw this stage in the schedule, it sent shivers down my spine. 5… laps… of… the… Richmond… Cobbled… Climbs…. 5 laps ! Are they insane? There is almost no way to prepare physically nor mentally for this. Each lap has 3 climbs (600m, 250m, 1km) which meant lots of hard efforts, but also lots of downhill recovery. It was brutal. The Zwift Racing League delivered, again. What an amazing event and I’m so proud that we have three teams competing in this historic event. I believe the ZRL is the biggest e-sport competition in the world. Well after last night’s even, I know why. Yes we compete solo in those races, but you go harder because you fight for your team. Absolutely love it.

Special mention this week to Nick who finished 2nd overall and took many FAL points. After his 3rd place in New York, clearly the american races suit him and he is now clearly one of the top riders of his division. Great ride from Nick and I want to thank him for his passion and dedication. He broke his leg not so long ago and has been on the come back trail – now he’s in the driving seat and getting amazing results. Well done ! 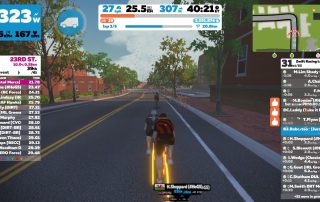 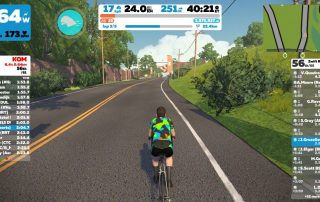 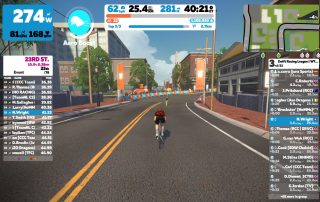 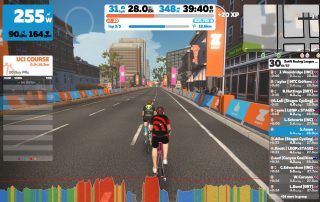 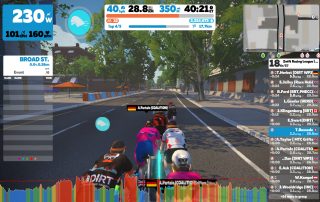 London calling to the faraway towns, now war is declared and battle come down… A team time trial in London has become a tradition of the Zwift Racing League! It’s a fantastic course with enough ondulations to make your life difficult, but flat enough to make the race super fast. Well, for teams Jura Sports it didn’t really go to plan… It was a tough night to say the least.

In real life when you have a problem you call it a “mechanical” ; on Zwift you call it a “technical” – we actually had both ! Our strongest rider in team B couldn’t join the event as his computer crashed… and in team C a rider literally fell off his bike as it probably wasn’t attached correctly to the trainer… In team A no excuses, we just didn’t have the legs ! So a triplet of technical, mechanical and physical failure !

So yes it was a tough night, yes we finished down in the ranking, but we still smiled and had lots of fun! Last week we had podium finishes and many PBs – you can’t win or perform to perfection every time!

I want to give a special shout out to my very good friend Phil from New Zealand who joined the team – this is really an international team with people racing all over the world. Zwift is so much more than a cycling or fitness platform, for me Zwift is a global community of cyclists that enables friendship all over the world. Amazing.

See you next week for more adventures… Ride on.

Sometimes you just feel on fire, and this is how Nick and I felt – absolutely amazing rides ! Nick finished 3rd in the C cat – our first ever ZRL podium ! I managed to get into the top 10 for a 7th place finish. The key was sticking to the front of the pack ahead of the sprints to avoid the splits. Easier said than done… but once I realised I was in the front group – I felt I had wings and it was extremely motivating; whereas last weeks I was always getting dropped to the second group and you feel that negative energy because you know your race is “over”. Cycling not only requires strong legs, but also a very strong mind.

The course was a lumpy 3 tours of Central Park with a very steep finish up the futuristic road on the NYC KOM. Wow that was steep – with some 17% segments you had to play the power ups wisely. Talking about power up – that burrito was a killer !

SO. MUCH. FUN. Thank you all for participating tonight – I really feel we are creating an amazing community and a nice group of friends!

See you again next week. Ride on. 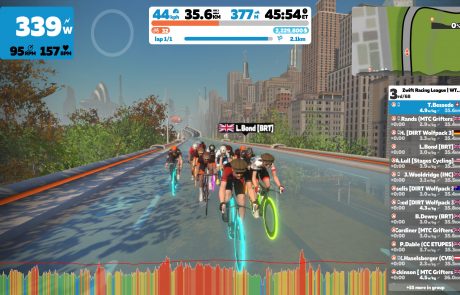 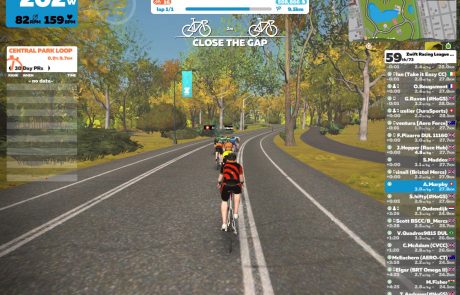 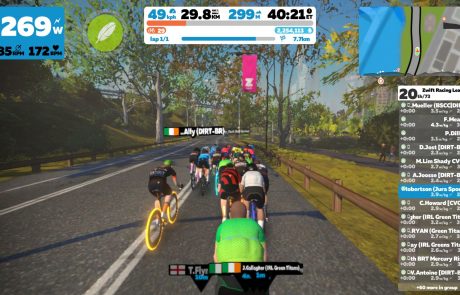 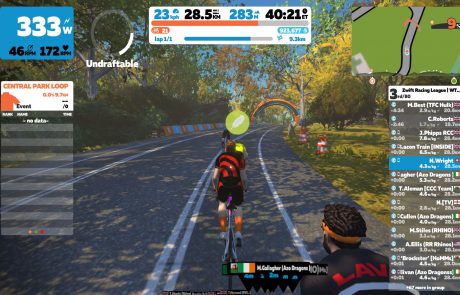 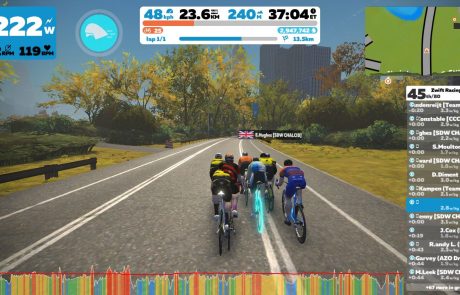 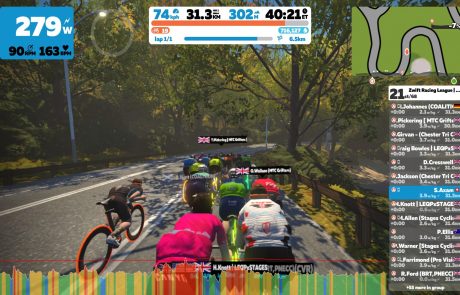 What a race! That steam roll power up really had a big effect on splitting the pelotons. Know the course yes, but on Zwift you must also know your weapons (aka power ups) and use them wisely!

We had so much fun last Tuesday on the virtual world of Watopia! Some pretty impressive results, well done everyone.
Not only we feel fortunate to be racing, but also very happy to be creating our little Jura Sports Zwift community with riders from all around the world. Last week we had people racing in Switzerland, France, UK, Spain and the USA! Loving it.

ZRL is back fast and furious with a TTT in France – no time to look at the scenery including the Mont St Michel, the Ventoux or the lavendar fields – this was full gas all out effort !

With only 24km this is one of the shorter races of the season – but shorter doesn’t mean easier ! With the Easter holidays we struggled to get full teams so it was going to be even harder but all the teams gave their best and we had some strong performances. Unfortunately we finished all a bit down in the rankings as teams with full 6 riders had a huge advantage. But hey, what matters is participating and that we have fun – and we did !