Diary of a girl in Jura Sports Camp, by Helena

It was a great first day in this camp and I will explain to you what we have been doing. This is the second year that I am writing a blog for the Jura Sports Camp and I am happy to do it again. This year the camp is in Chavannes-des-Bois.

In the morning, we all introduced ourselves to each other; we sat in a circle and told each other our name, age and passion. Thierry said that we should try to remember all of each other’s names on Friday (the last day of the camp). Later on, the staff members all checked our bikes to see if our tires were well pumped. We were also biking around cones when we were finished.

After that, we separated into groups. In those groups, we biked to a picnic place and had a snack. We also had free time to play tag, do some drawing and all kinds of nice things. Next, we biked in the forest and arrived at a big river. It was beautiful. We had our picnic lunch there. When we finished our lunches, we biked back to the picnic place.

Over there, we had another free time and after we biked back to the Sports center. When we arrived back, the boys and girls were separated to do two different activities. The girls (which includes me), we were cleaning our bikes whilst the boys, were doing a water rally. After a while, we switched so the girls did the water rally too.

Later, we had another snack (cucumber and carrots) and after we did an obstacle course. Thierry put us into different groups to do it. It was really fun. What we had to do was to run the obstacle course, get a small ring and run back to put it in your team hoop. The first team to get all the rings in their team hoop would win.

It has been a great start to our week. I love it and I can’t wait to know what the programme is for tomorrow. 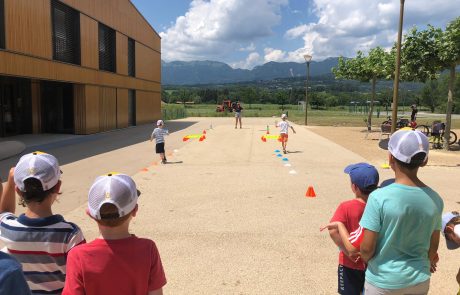 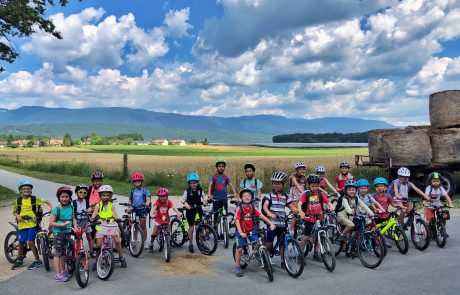 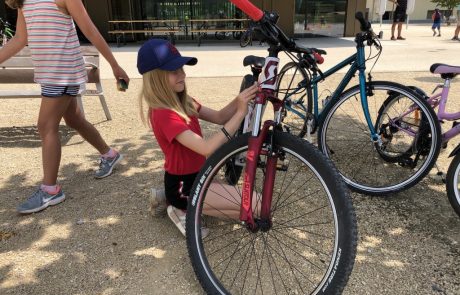 Today is Tuesday and we had another great day in the Jura Sports Camp. We started the day by splitting into our three groups like yesterday. In those groups, we did quite a long bike ride. My group went past Manor Chavannes and into the fields. After that, we biked to the same picnic place as yesterday and had our snack.

When we finished that, Thierry explained to us that we were going to do land art. Land art is when you take natural things and can make a drawing or painting out of it. Thierry made four groups. One of the groups made a rocket, another made a big, big galaxy, a different group made a beach and finally, my group made a circle and put patterns and flowers into it. Later on, we had our picnic lunch and had free time to play games.

After that, we biked to the big river that we went to yesterday and hade some more free time. When our free time was finished, we went into two groups. Since we were in the forest, we had to make forts. It was super fun. We had to use pieces of wood to make them (obviously). Soon after that, we had another snack (fruit & nuts) and later, we biked back to camp.

At camp, we got to play games in the gym or do drawing outside while waiting for our parents. 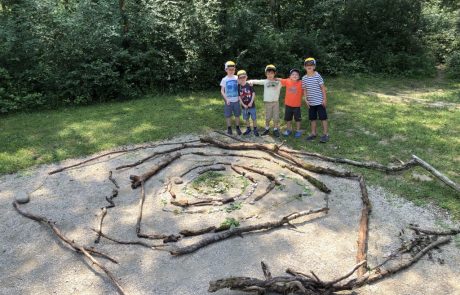 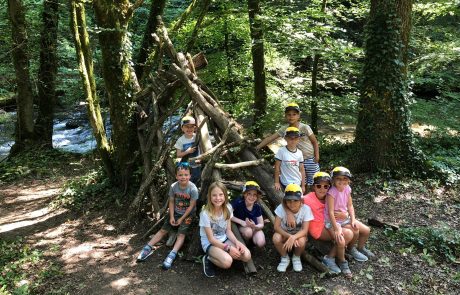 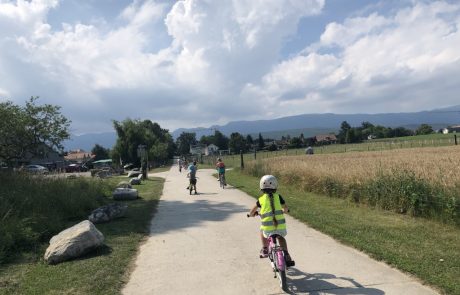 This is the third day of the week. It has been wonderful. In the morning, we left in our groups to go for a long bike ride like yesterday. When we finished that, we biked to the picnic place and had our snack and free time.

Later on, we biked to the big river that we go to all the time, and stayed there. Thierry split us into two groups. What we did was make a campfire. We had to find little twigs and big logs. We took rocks, made a circle and made the campfire in the circle of rocks. Each group made their own campfire.

After that, we each had to find a stick the length of our arm. Thierry and other staff members sharpened the edge of our sticks for us and gave us sausages to grill. The sausages where delicious. While we had the sausages, we had it as our picnic lunch too.

When we finished our picnic lunch, we went for a long walk by the river. We didn’t take our bikes with us (obviously) so we kept them locked up in the forest.

We finished our walk and biked back to camp. At camp, we got to play games and draw while we were waiting for our parents to pick us up.

It was a great experience! 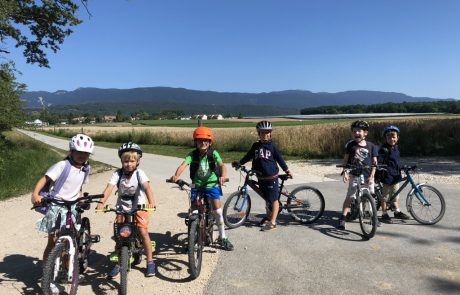 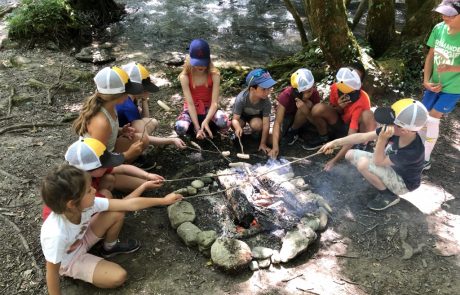 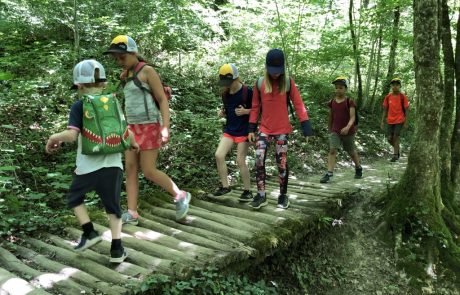 On Thursday, we did our normal routine like usual. (We went for a big bike ride, went to the picnic place and had our snack.) After the snack, Thierry split us into four groups. We had to do a treasure hunt. We had to find 19 things that are natural (a flower, cranberries etc.) The first team to find all the things wins. The trouble is, the object that you find, you have to say the name of it to Thierry. Therefore, if you don’t know it, you won’t have it. Our team came 3rd(which means second last)! It was great fun.

Later on, when we finished the treasure hunt, we all had our picnic lunch. We finished lunch and afterwards, Thierry said we should go back in the same groups like for the treasure hunt. We had only ten minutes to try to find everything that we had to find during the treasure hunt. Therefore, Thierry wouldn’t tell us what the objects were so we had to remember. Three teams got 18 objects and got every name rite (including my team) and one team got all the objects but could only name 18. That means that every team had equal points.

When we finished that, we went for another long, long bike ride to get back to camp. At camp, we all cleaned our bikes. They looked very shiny when we finished.

Later on, we made birdhouses. Thierry gave us each a soya milk bottle. We had to draw a circle or a square, any shape you want really, so the birds can go in. Any staff members would cut it how we wanted it. However, when we opened it, we realized how old it was so we had to clean it. It was disgusting! Next, we had to paint the box. Obviously, we painted it because we don’t want to see all the writing rite? Now we are letting them dry overnight.

After that, we had a snack. Since it was Sienna’s birthday (a girl from the camp), she made beautiful cupcakes that we could all eat. They were delicious! During the snack, we could also play outside.

When we finished that, we did many sports activities. We went in the same groups as in the treasure hunt to do the activities. There were four different activities. An obstacle course, long jump, throwing hoops onto sticks and a running rally. It was really fun (and exhausting)!

Later on, we just played games or did drawing while we were waiting for our parents to come.

It was another happy day in the Jura Sports Camp! 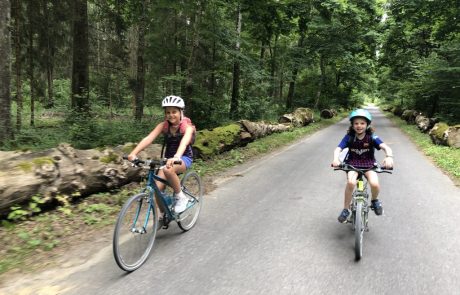 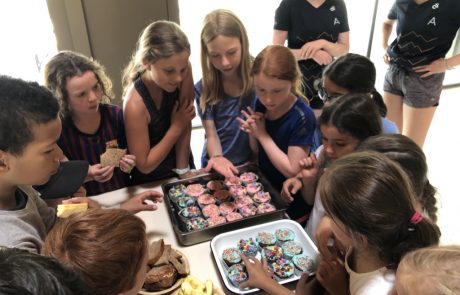 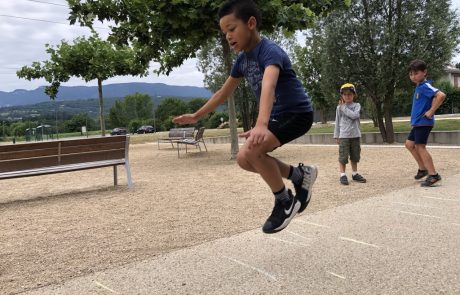 This is the last day of the week, I am so sad! When we arrived in the morning, we continued the bird feeders from yesterday. We decorated them and (if you wanted) some colored paint.

After that, we did as we usually do, a bike ride in the morning, then go to the picnic place and have a snack. The snack is delicious because Thierry makes homemade bread for us. It’s so good!!!

Later on, when we finished our snack, we biked to the big, big river again. And guess what? We had to make boats! We were each making our own one. It took quite a long time but it was really fun! We ate our picnic lunch, and then we tested our boats in the river. We each had our turn. Nell (one of the staff members), went in the river to catch the boats when Thierry let them go in the water. I loved it.

When we finished that, we biked back to the sports center. At camp, we cleaned our bikes. When people were finished, we would add a stick in the bird feeder for them to perch on. We also had to put string in it so we could hang it.

Later on, at 5pm, there was an aperitif. We had fun. The parents came to. After that, Thierry gave us an excellent speech. Thank you Thierry! We each got a really nice certificate at the end.

This was the best camp ever!!!

A huge thank you to Helena for writing such a wonderful blog, well done ! 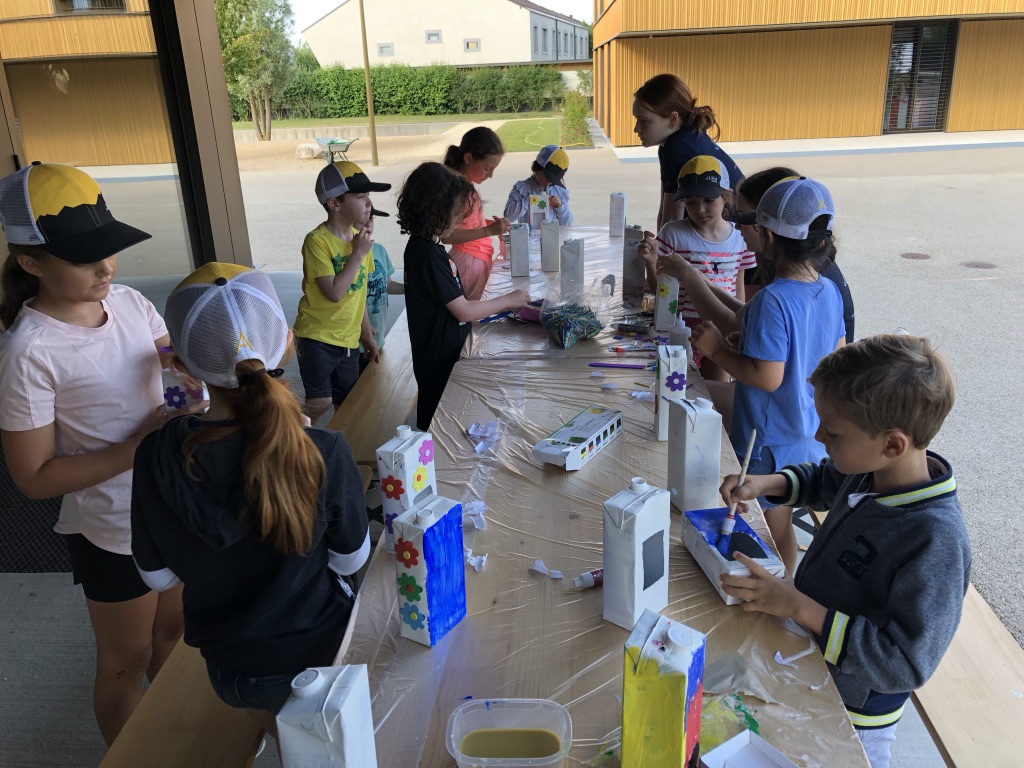 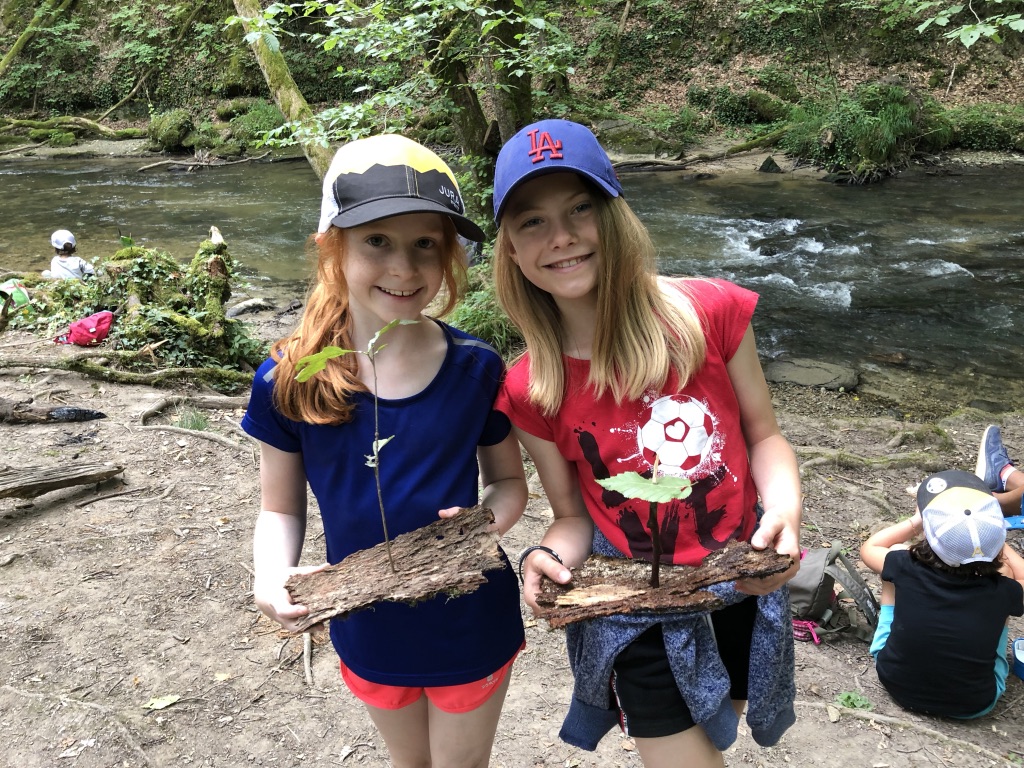 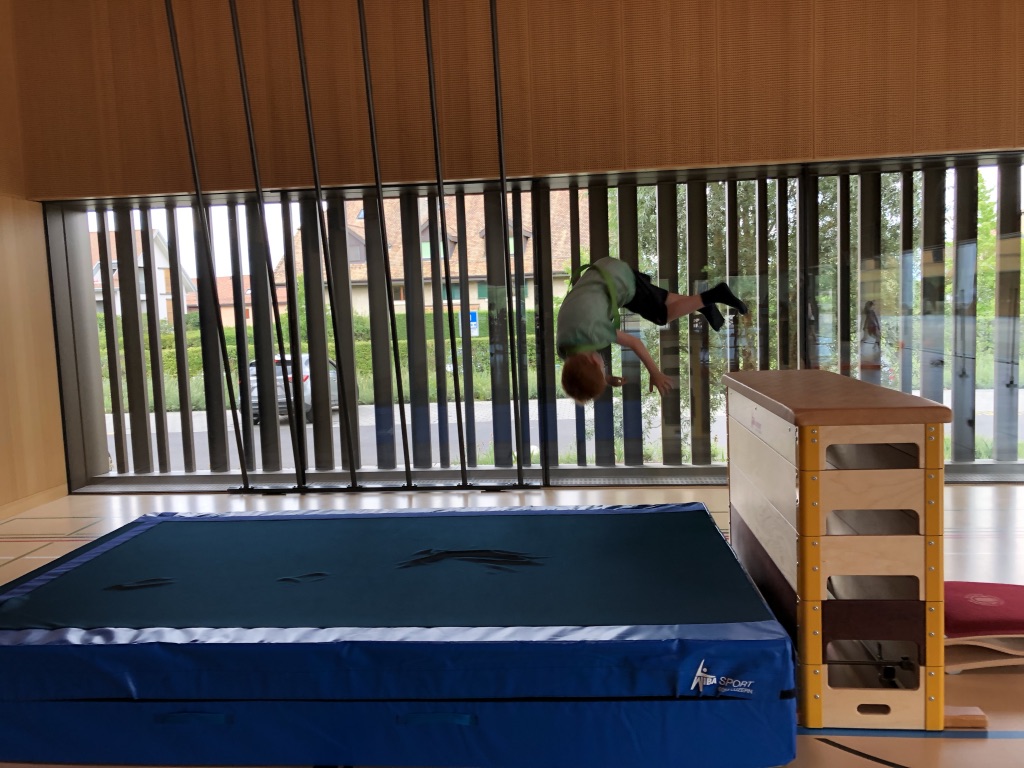 If like the Jura Kids you want to have fun during your school holidays, contact me at thierry@jurasports.com and find out more about the Jura Kids Camps !