From the 2nd until the 6th of September I participated in a very cool challenge: SUCH. It stands for Swiss Ultra cycling CHallenge. The rules were fairly simple. Start at 10:10 am on the 2nd from any Swiss railway station and finish in Bern in front of the parliament before noon on the 6th September, having sent a postcard from all 26 cantons in Switzerland, all by bicycle. We could decide our own routes and strategies but no outside assistance. It was a pure solo effort bike packing around Switzerland. So here is how my challenge went !

I am a complete novice in bike packing. This version of cycling has grown exponentially since COVID started and most companies supplying material such as bags or paniers were almost all sold out. Luckily I found what I wanted from APIDURA. I bought a 9 litre saddle pack where I would put all my stuff that I didn’t really need for the day but mostly for travelling. I also bought a 5 litre handlebar pack which would contain things I could need quickly such as a jacket, a small pump or some food.

I also had a mini tube bag from XLAB which I swear by for triathlon, their accessories are amazing.

What did I bring with me ? Way too many things but we never know. The weather in the mountains can change very quickly and at this time of the year you can have snow. Better to be safe than sorry ! 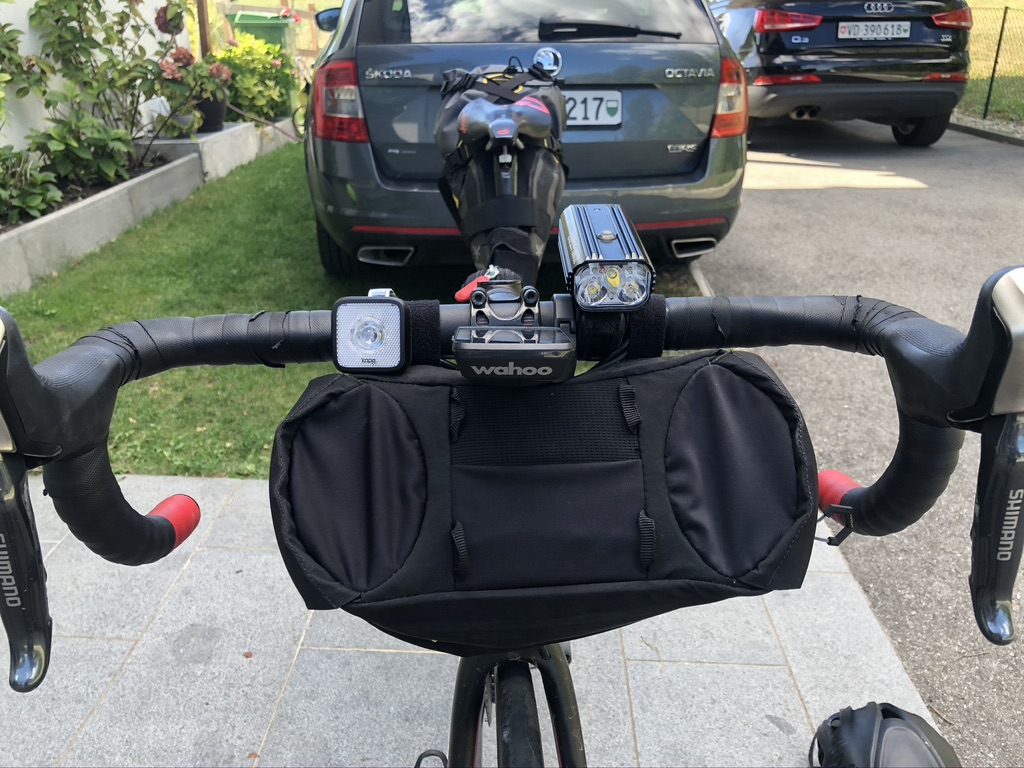 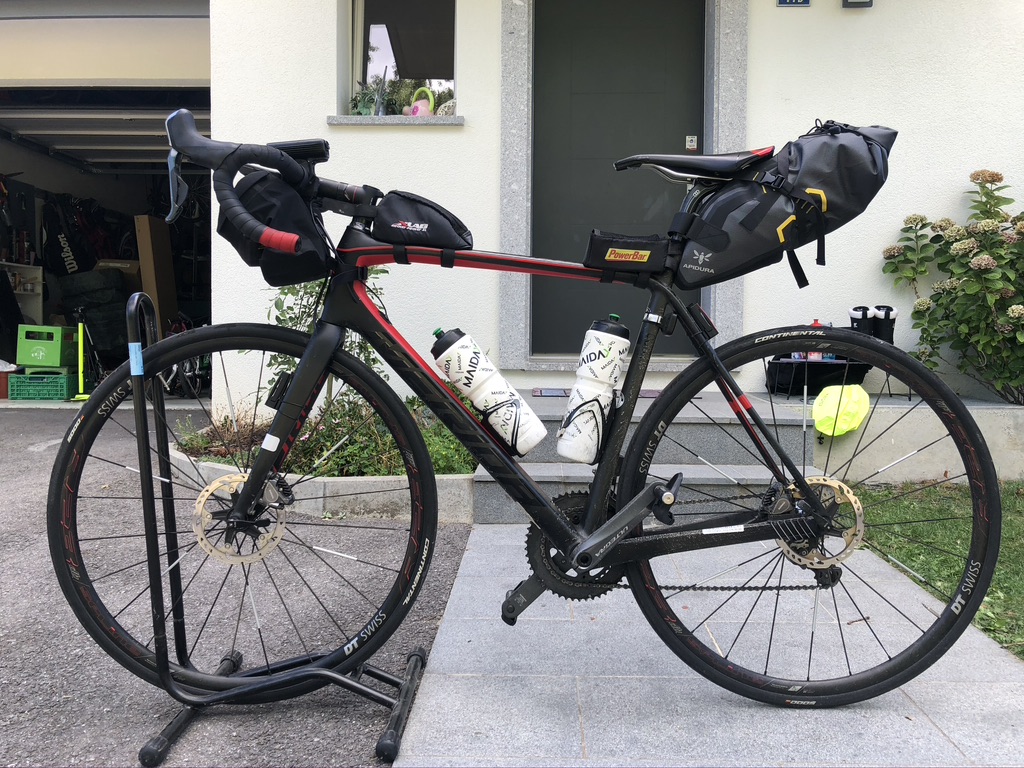 I decided to start my journey from Versoix which is the closest railway station in canton Geneva. The enclave of Céligny would have saved 10km but the station is no longer in use… I decided to divide my route in 5 stages. 2 long and flat stages; 2 mountain stages; and 1 final easy stage.

The route would start from Versoix going north to Basel, then heading east to Sargans, then back in the centre and off to the mountains before returning to Bern. My route was around 900km with about 11’ooom elevation ! It was surely going to be EPIC. 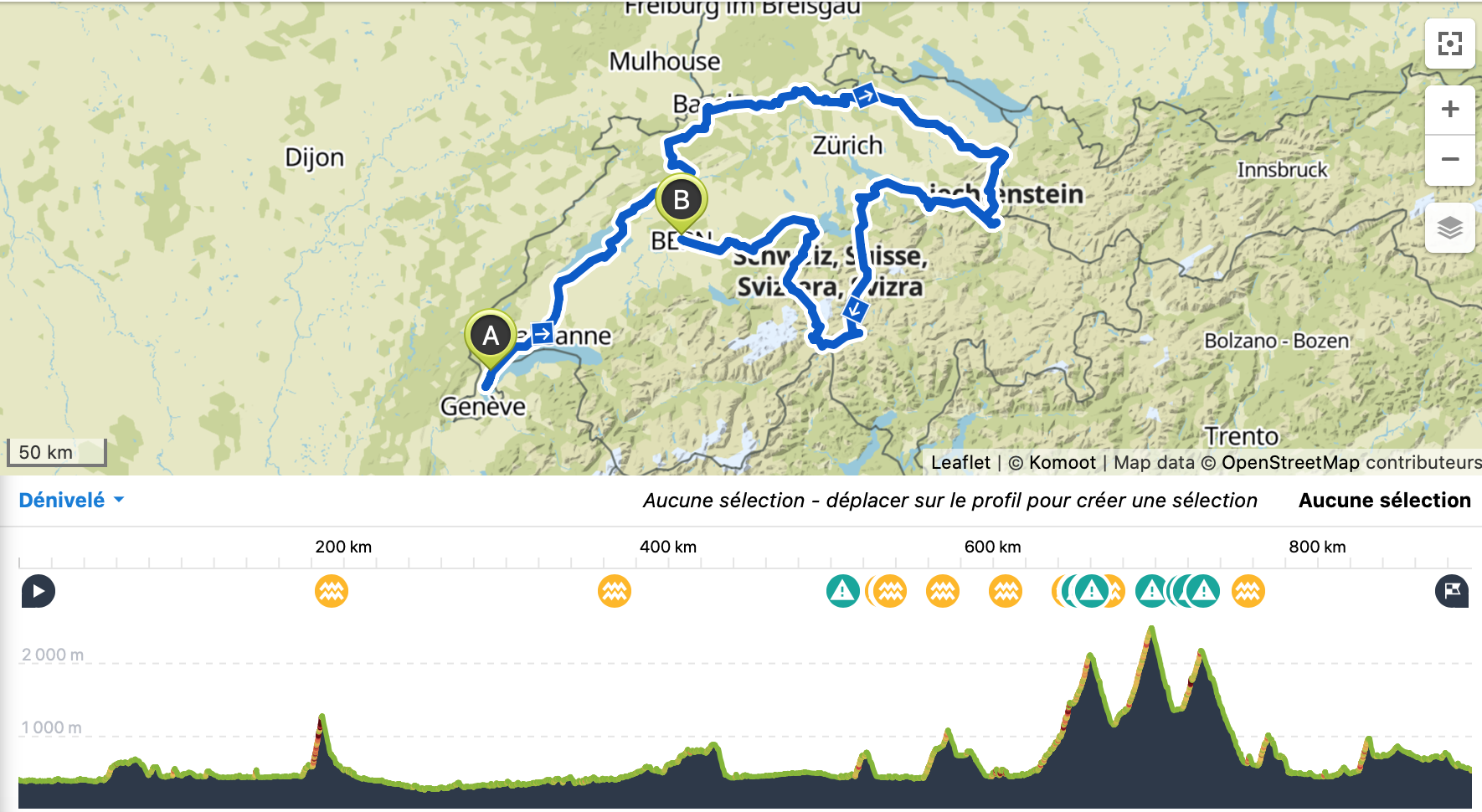 It was nice to see quite a few people in Versoix; there were at least 20 riders starting from there. The others had chosen the Gotthard area; and one had chosen the Jura ! Today’s stage was going to be fairly flat but long. My only concern was arriving late and running out of daylight. I saw many other riders during the day, and already the camaraderie and friendship was starting to form.

Everything was going really smoothly until I arrived in Bienne. Most riders took the uphill to the Jura via a national road – but my route took me almost all the way to Solothurn and I had to cross the Weissenstein pass; that was a mistake ! I was suddenly faced with percentages above 20% and on day 1 this was not supposed to happen… The downhill was brilliant, and I will always remember the road from Delémont to Basel, amazing. I arrived around 9pm at my hotel and they were very kind to cook me a nice big pasta dish despite the kitchen being closed already. 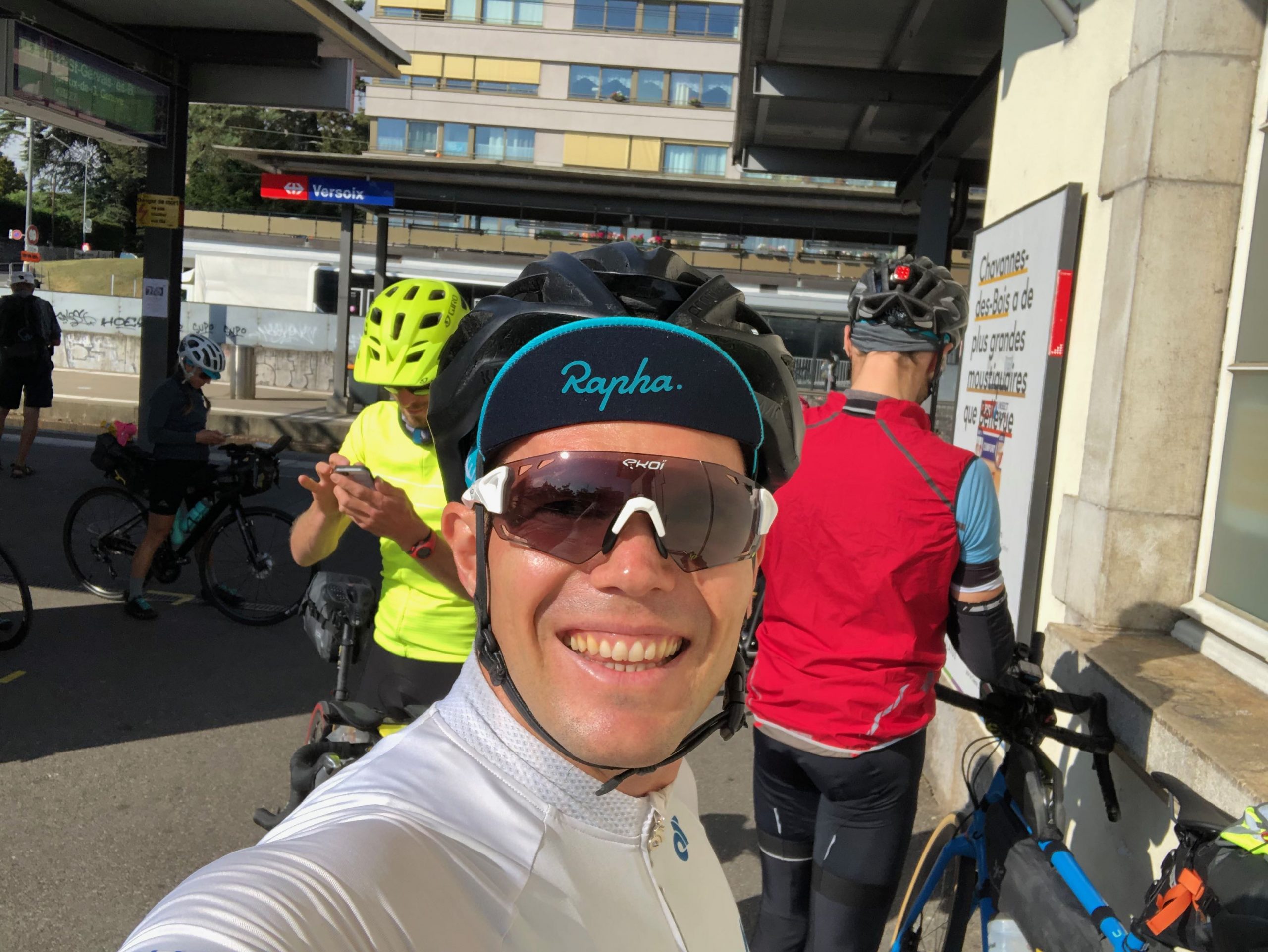 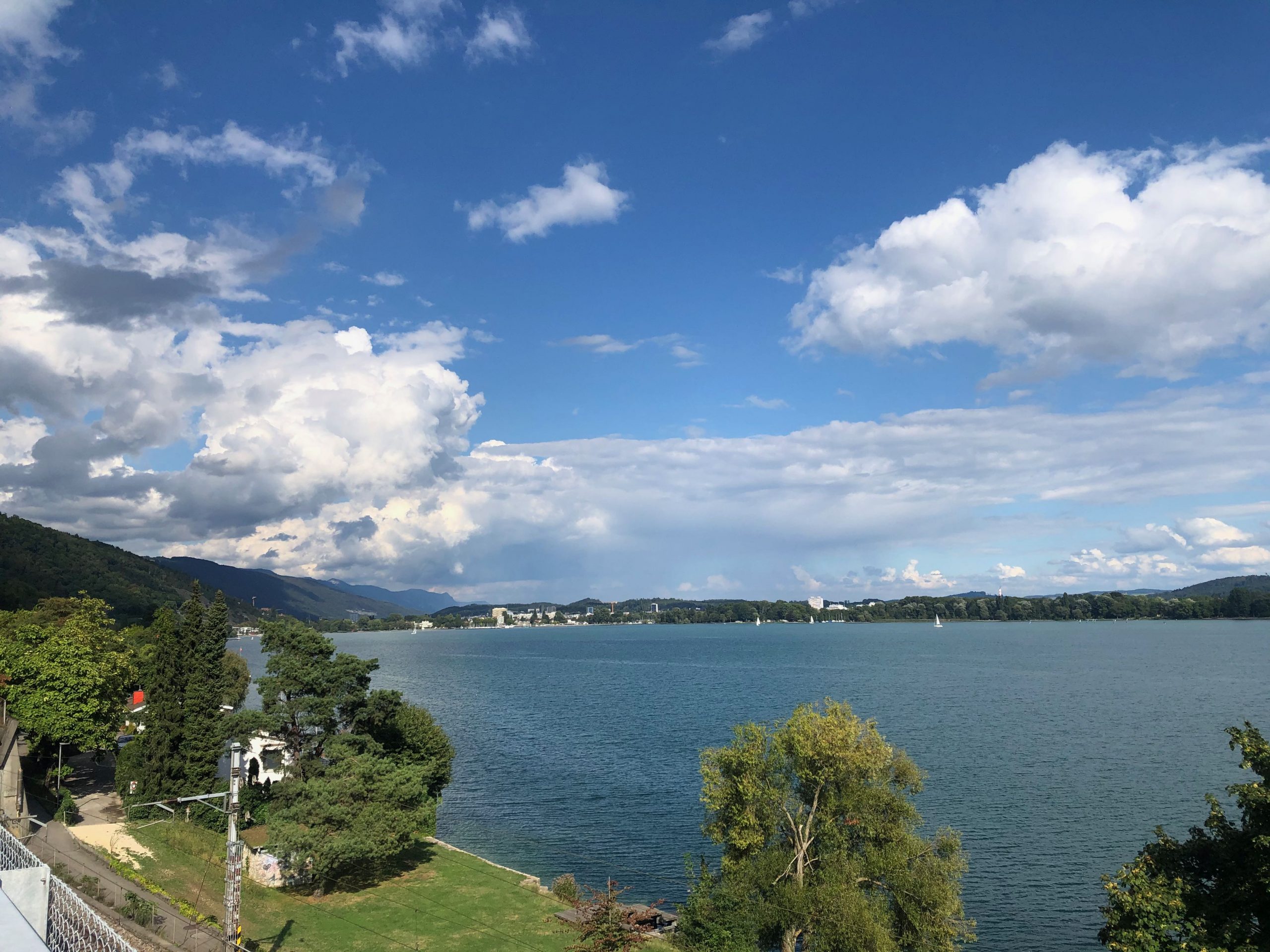 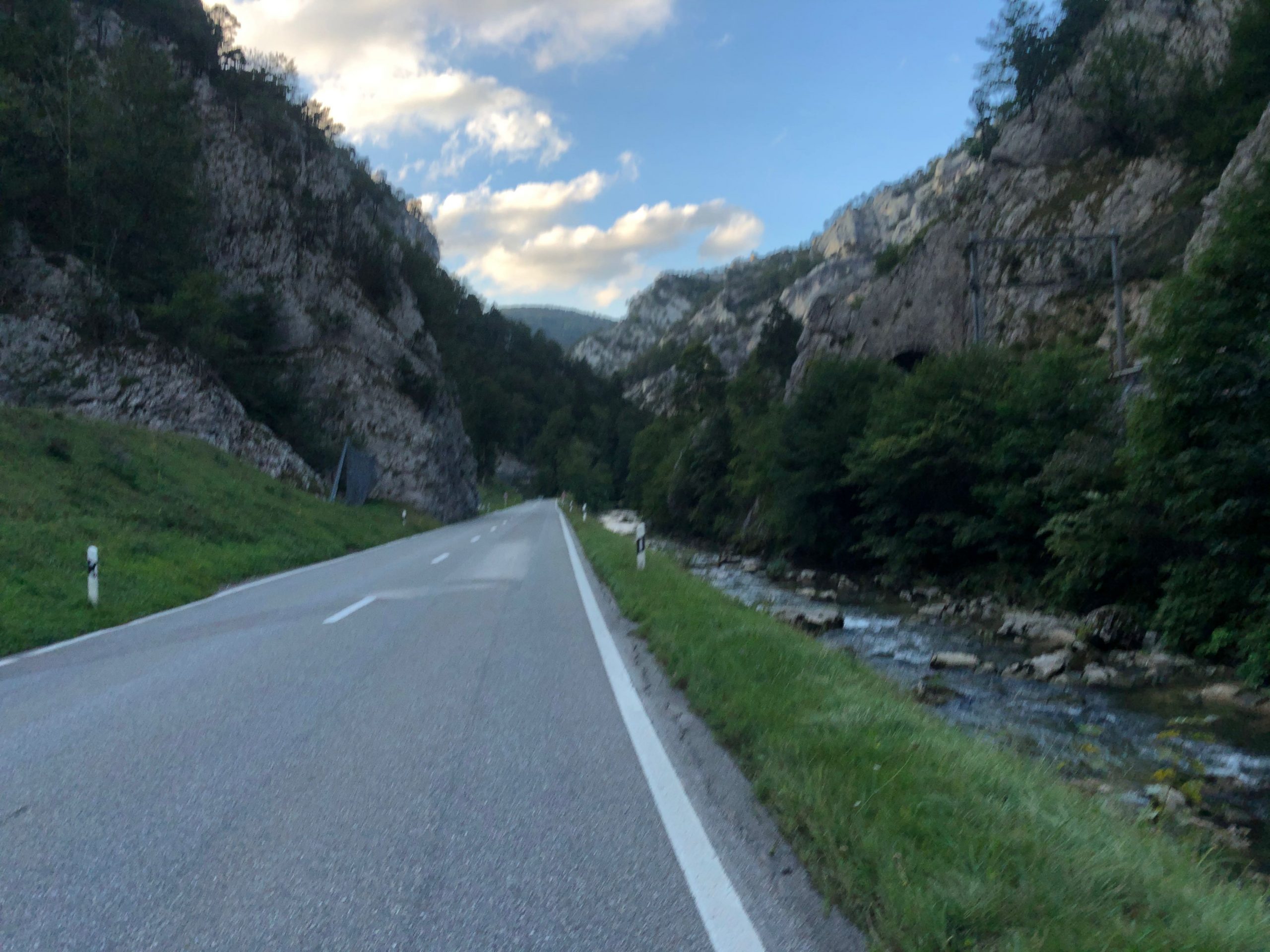 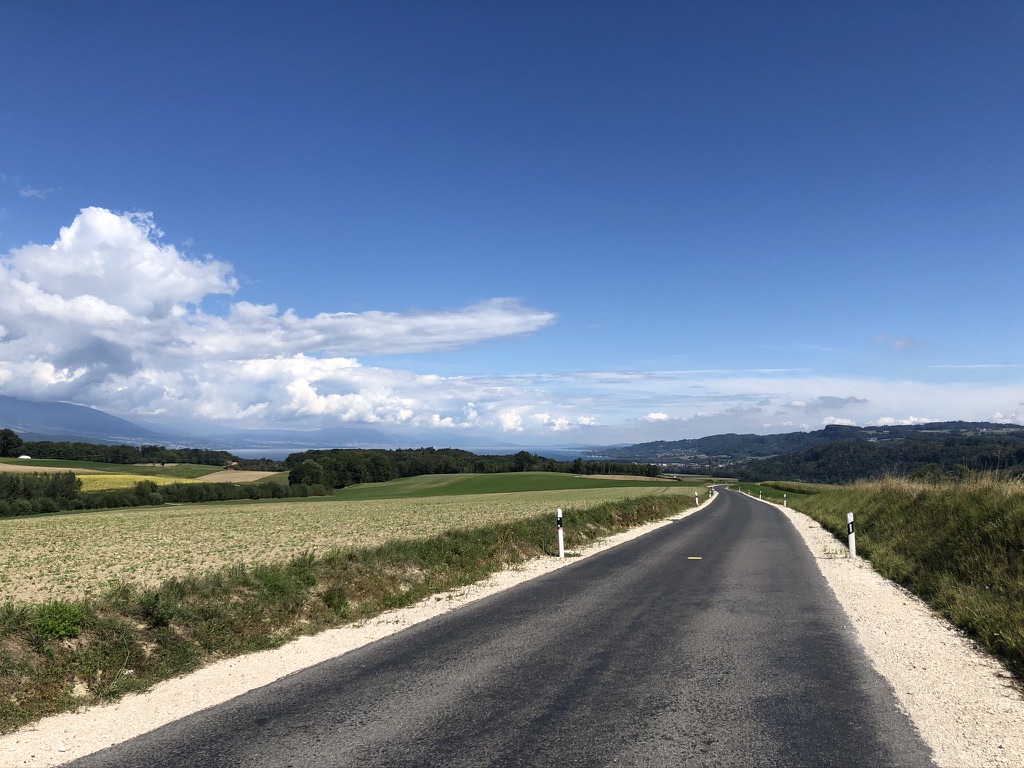 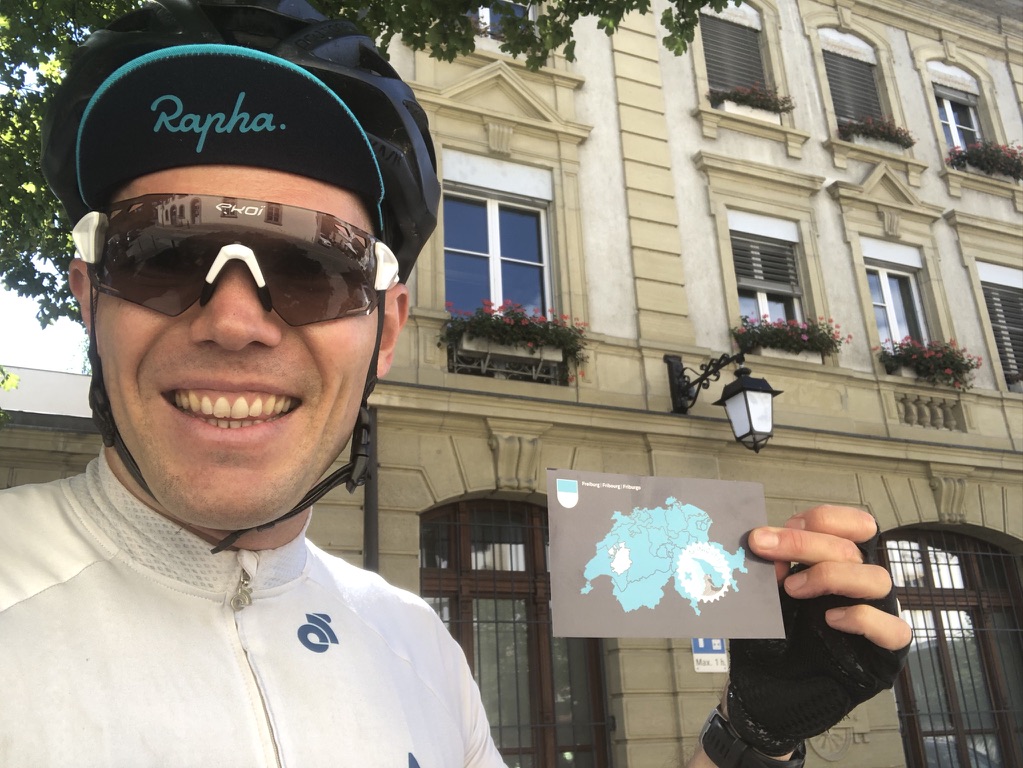 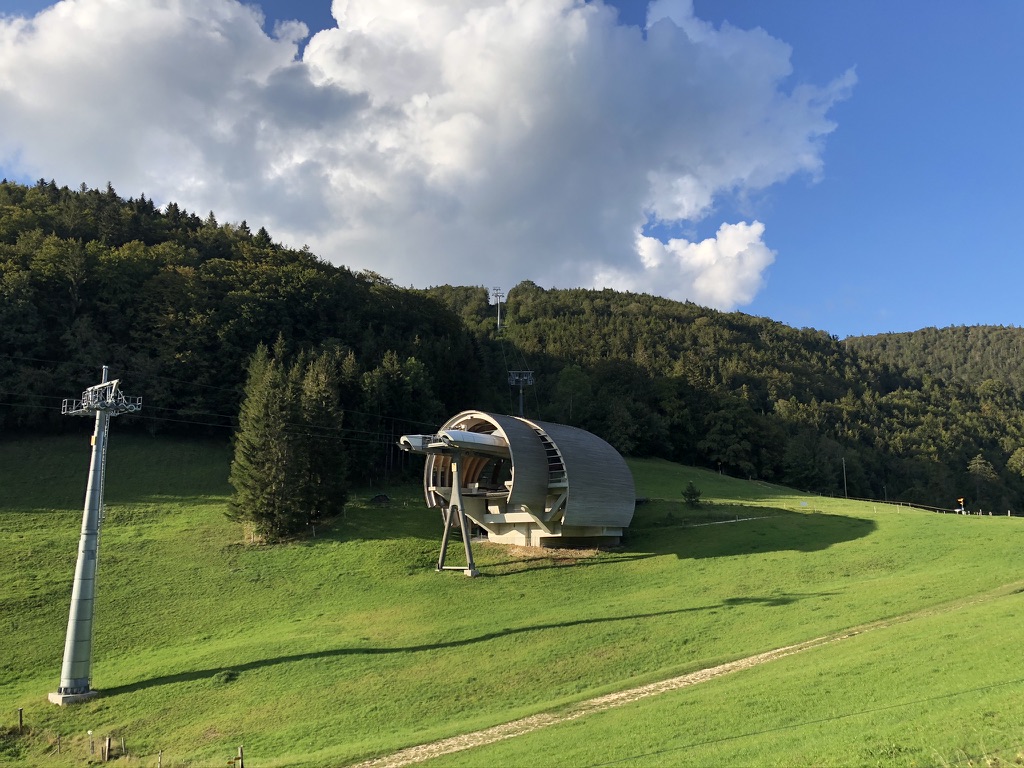 Day 2 was going to be a very long day again but mostly flat with some rolling hills but hopefully this time no surprises ! First I had to go in the middle of Basel City in the morning… there was a lot of traffic but what a coincidence to meet fellow rider Adrien at the post office near the train station. He had ridden all night already 540km non-stop and was hoping to finish already that evening. Only 2 days ! Wow… My challenge was a lot different than his !

Despite the traffic in Basel I managed to get out of the city and took the main road all along the Rhein. This was a drag. Very long section and mostly against the wind. I must say it was really boring, despite the nice road conditions. After about 90km I finally reached Eglisau in canton Zurich (my canton of origin) where I took a little rest and had a well deserved lunch. The scenery would now change; I would be on the rolling hills of the east of Switzerland with mainly agricultural land before hitting the mountains near Appenzell. It was again a little boring until I reached Appenzell. The scenery was amazing; Appenzell is really a canton to visit (both actually). I spent a good 30min in the city centre visiting and wondering around.

My stage wasn’t finished… the goal was to tick off the furthest canton of Graubünden! That final section was a drag, but the scenery was simply amazing. I finally arrived at my hotel around 7pm and wolfed a huge portion of pasta ! 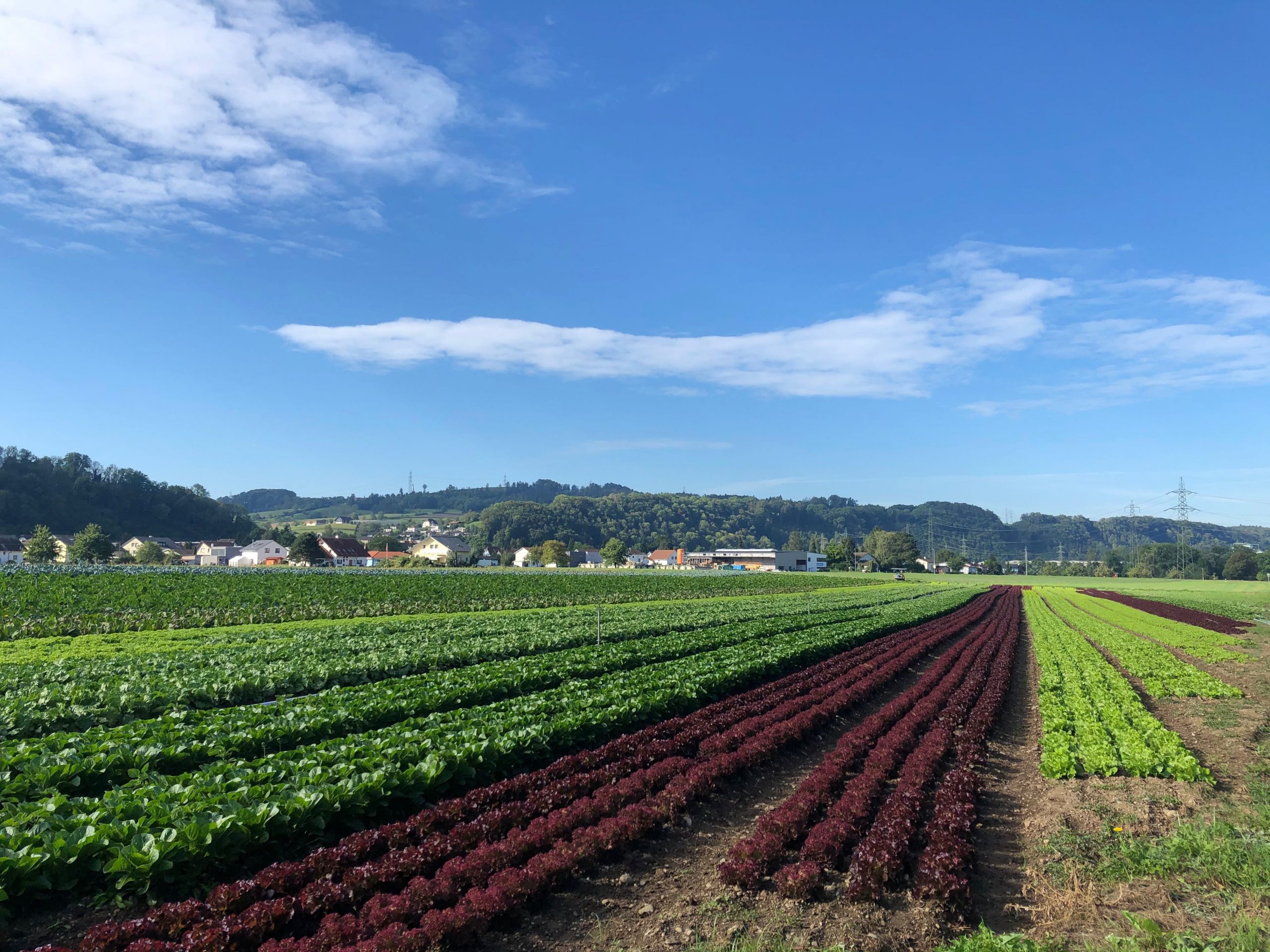 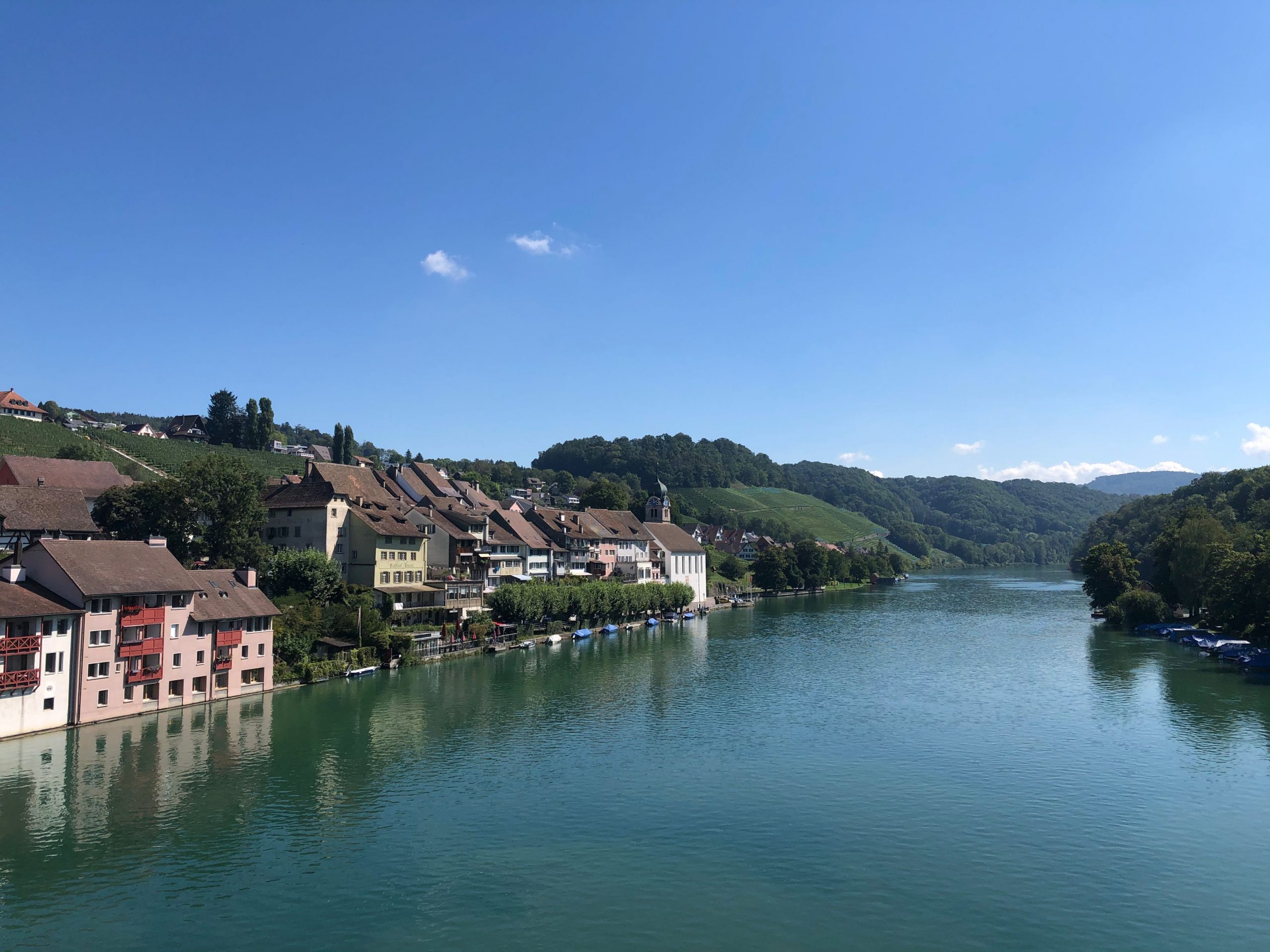 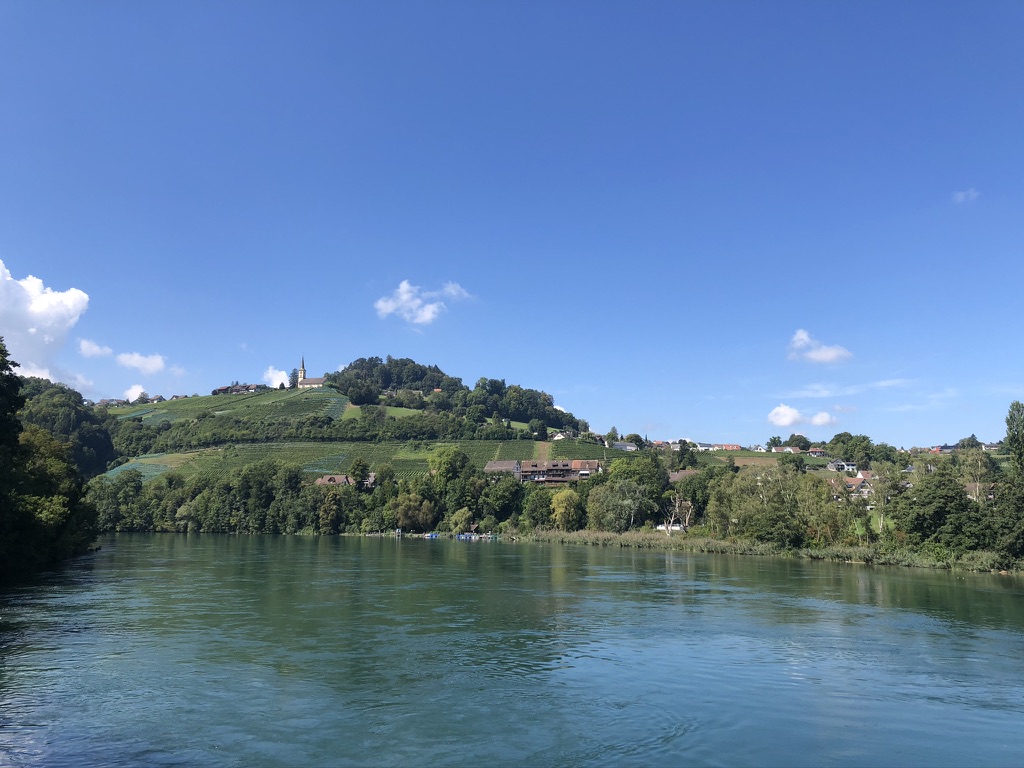 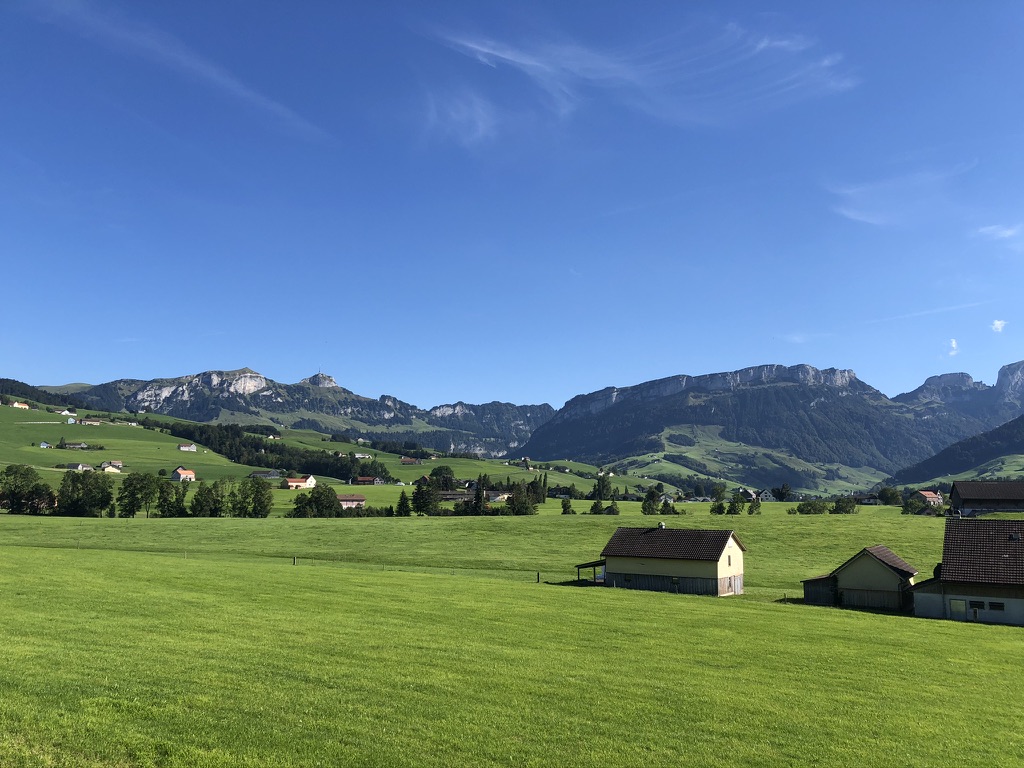 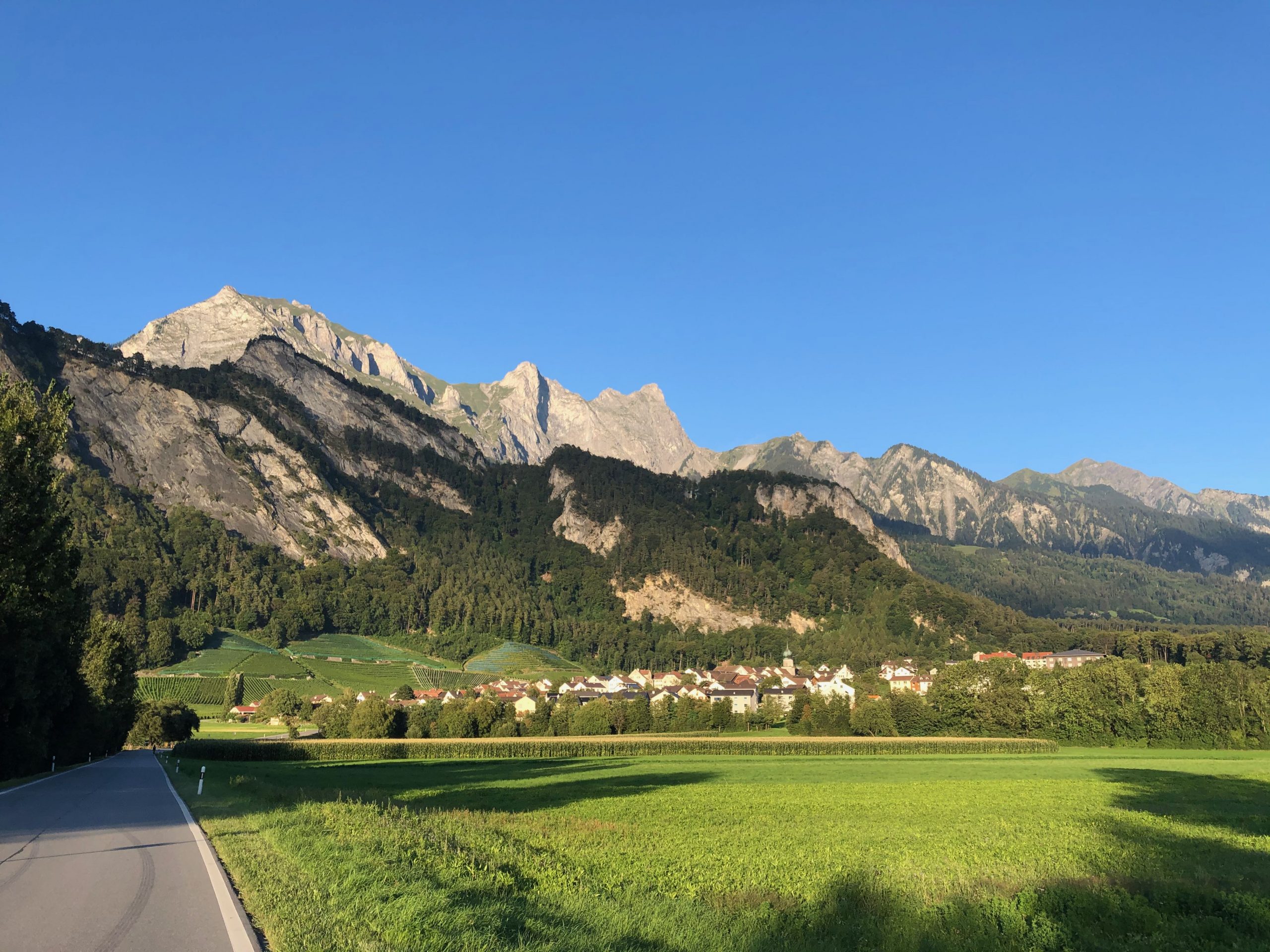 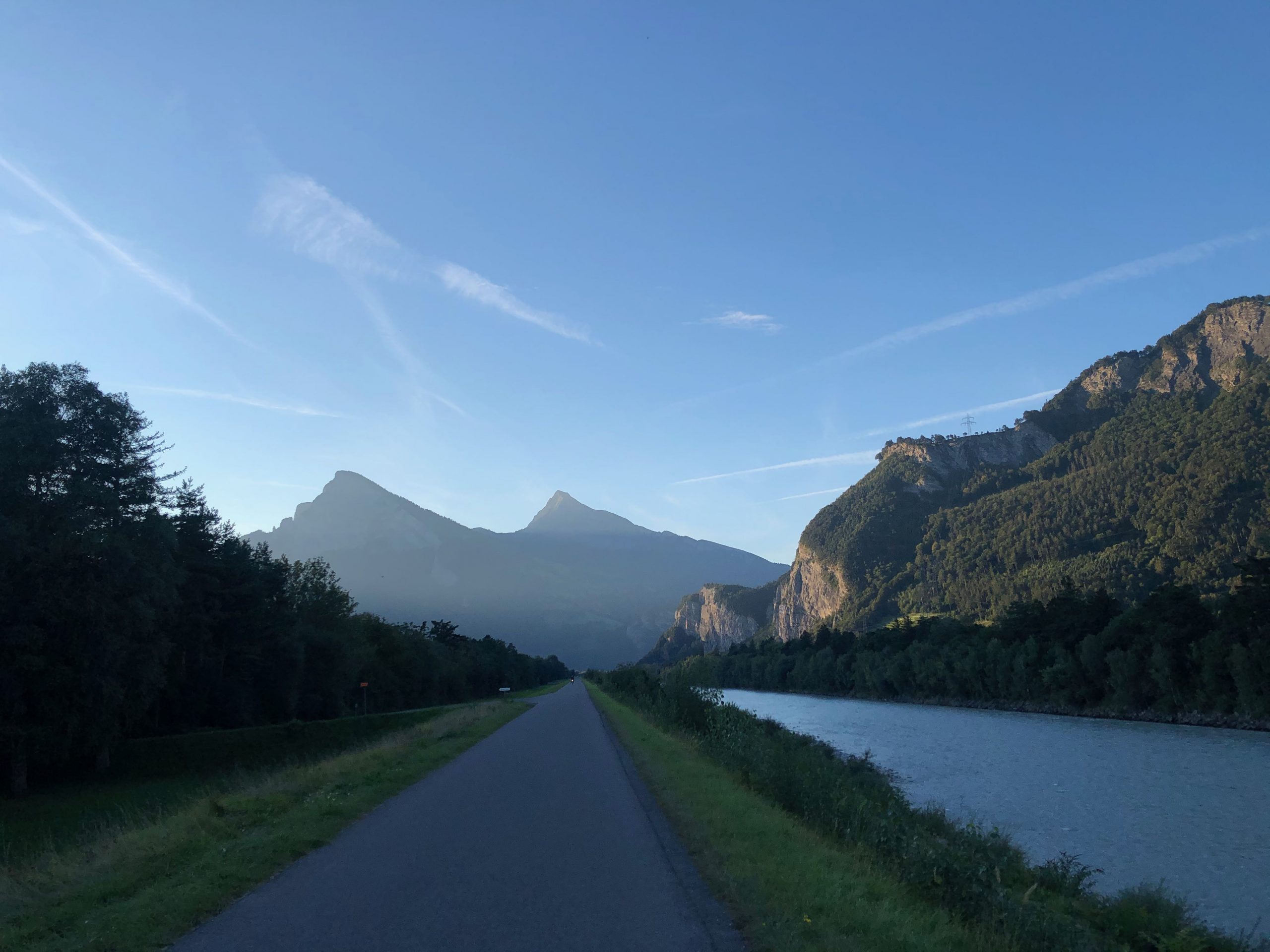 Today the mountain stages arrived with some serious climbs, especially the final ascent up the Gotthard pass. Finally the flat and monotonous roads were behind me. Now it was all about lakes and mountains, the way we know Switzerland!

The start was nothing short of sublime. Riding next to the Walensee was just beautiful. I had done my military service there almost 20 years before and it was quite something to go back again, in for sure a very different uniform ! I reached also the Obersee before the first difficulty of the day, climbing over to Feusisberg and the Raten Pass to go back down to Agerisee to tick off Zug. Again, stunning scenery but more climbing than I anticipated

Next to tick off Schwyz canton I decided to go to the city Schwyz. Now this was a small detour but how many times will I be able to see it? Furthermore, this is the canton of origin of my grandfather so I really wanted to spend the time to enjoy it and soak in the scenery. It did not disappoint – what an amazing town and canton. Especially when I reached Brunnen and the Vierwaldstättersee; STUNNING. The road from Brunnen to Altdorf next to the lake was a little tricky and dangerous, but the views were out of this world. A must do !

From Altdorf there was only one big obstacle in front of me : the Gotthard pass. 35km and 1500m of climbing. This was going to take a while and the sun was starting to really beat down on me. At the beginning of the climb I met an British rider called James and we talked for a little while, it’s nice to meet friendly people on the road. Our conversation stopped as I was cheered by my cousin and her family ! What a great surprise to see them there, so nice ! Later on the climb I overtook my British friend again, who was struggling a little. Stupidly I didn’t ask for his number as I knew he was also stopping in Airolo but maybe I would see him later ?

The Gotthard pass is just crazy. The steepness sometimes is brutal – but overall it’s just very very long. The main difficulty are the laces up to Andermatt – luckily there is a new cycling path otherwise it would be very dangerous for cyclists to share such a road with cars and trucks. After Andermatt I thought the most challenging part had been wrong – no no ! The last 3km were on cobbles, ouch ! This was very tough but what a crazy way to finish a climb. I reached the pass and the views were amazing. To go down I had 2 options : the main road (smooth surface) or the iconic Tremola pass (cobbles). Of course I chose the Tremola ! Maybe a mistake as it was very uncomfortable to ride on cobbles but I was here to soak in the experience and discover amazing routes. It did not disappoint.

I reached Airolo around 7pm and met one of my fellow competitors who would cycle the whole night to go to Bern… I had other plans : a beer and a pizza and enjoy my evening. And who did I meet in the pizzeria? My English friend James arrived late but we enjoyed a few beers telling ourselves our war stories of the day. Great way to finish the day ! 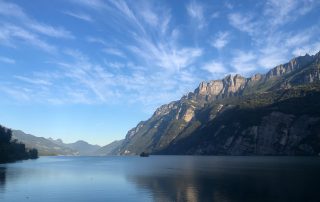 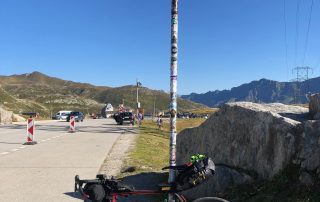 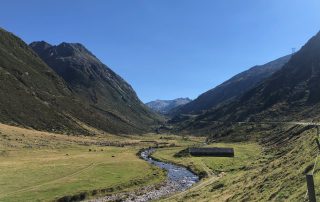 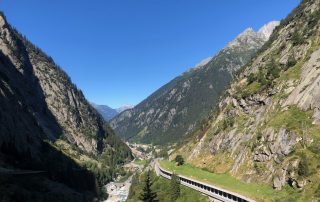 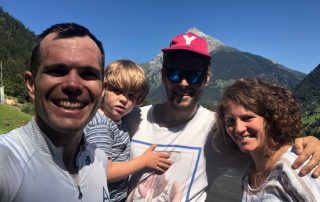 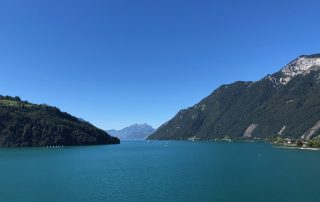 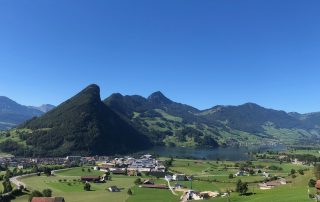 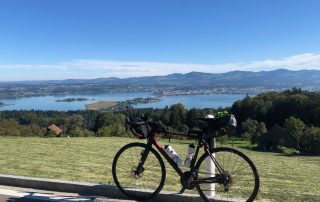 If the previous day wasn’t already EPIC enough, today was going to be the mother of all EPIC stages. 4000m of climbing were waiting for me. The first challenge was the Nufenen Pass or in Italian Passo della Novena (depending on which side you start the climb!). A very long climb but never difficult – but for sure it takes a while to climb 23km and over 1000m elevation ! The scenery was magic – I was almost alone on the climb as I started in the early hours. At the top it was pretty cold, normal as this is the highest paved road in Switzerland I believe at 2400m elevation.

The descent was chilly and the road surface a bit tricky but absolutely beautiful. I quickly arrived in the Valais and right away the next difficulty arrived: the Grimsel pass. I had heard to many times about this one and now I knew why. The laces up the pass are simply stunning. You also have views on the Furka pass; another pass I would have to revisit one day. This was probably the highlight of the whole trip. With views of the mountains and the glacier this was something I’d never seen before.

I was literally shocked how long the descent of the Grimsel was, almost 35km ! But I wasn’t going to complain; I had done already a fair bit of climbing. Arriving in Meiringen earlier than planned; I thought that maybe I could finish the whole thing today, and basically tack on my 60km stage 5 onto this one. But first I had to tackle the beautiful Brünigpass. Short pass, but after all I had gone through it was tough. The pass took me on the other side to Obwald – a very little known canton but absolutely stunning with lots of lakes. I crossed quickly Obwald and Nidwald to reach again the Vierwaldstättersee and once again the views were amazing. Only a few cantons left ! I ticked off Luzern in Kriens and now I had the “rolling” hills of Emmental before reaching my final destination, Bern.

I arrived in Bern and had a very cool welcome committee with a few riders and the organisers. I was really proud of what I had achieved. My goal was complete : not only had I finished the event, but my main goal was to enjoy the roads and scenery and discover my beautiful country. Job done ! 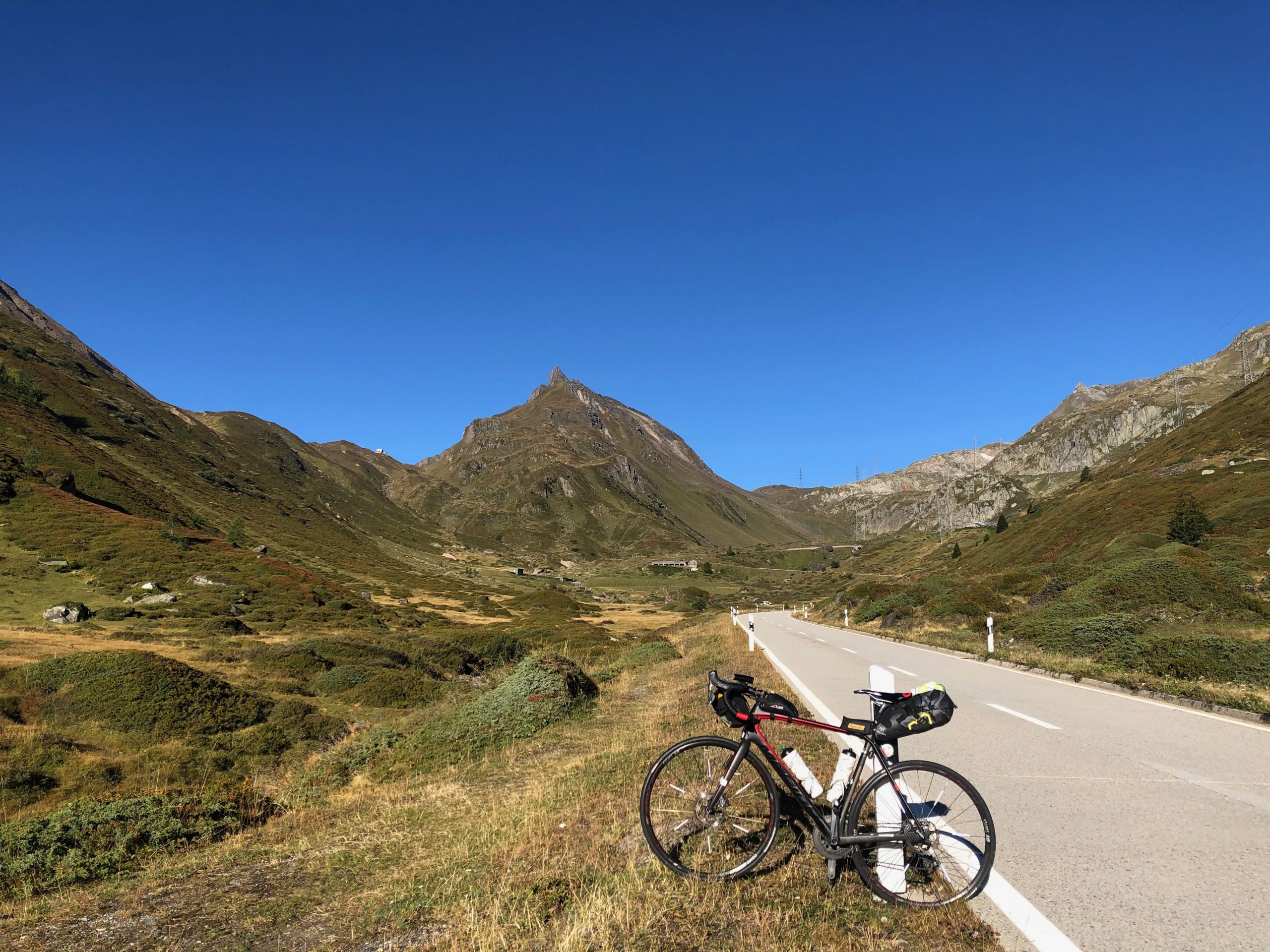 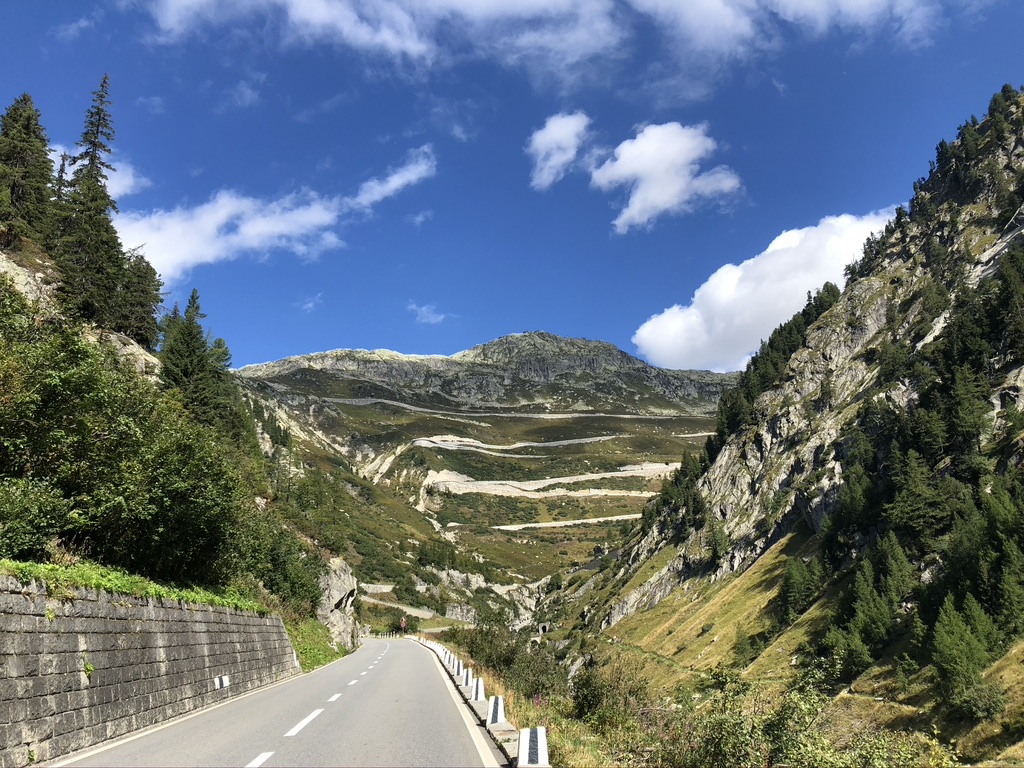 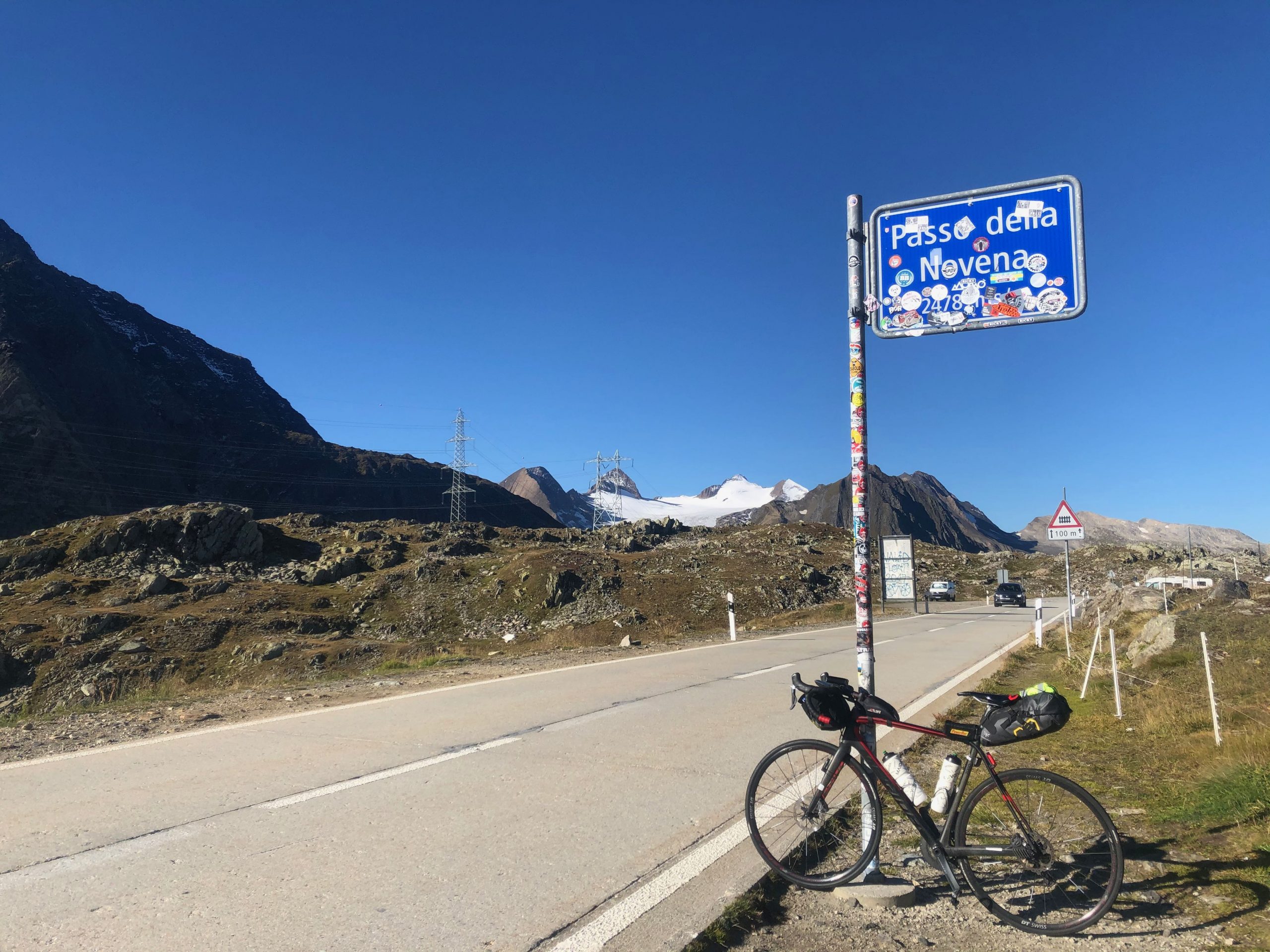 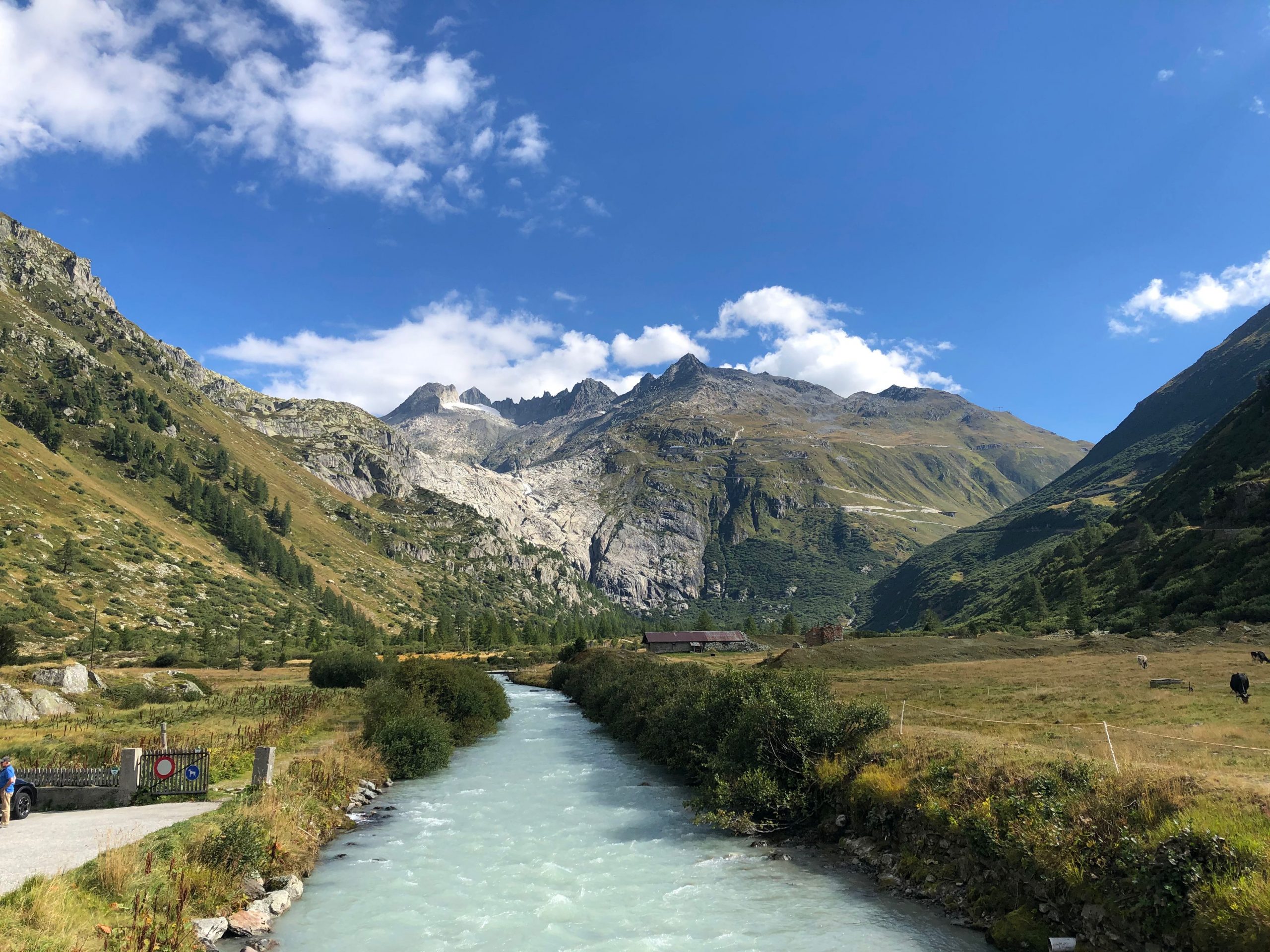 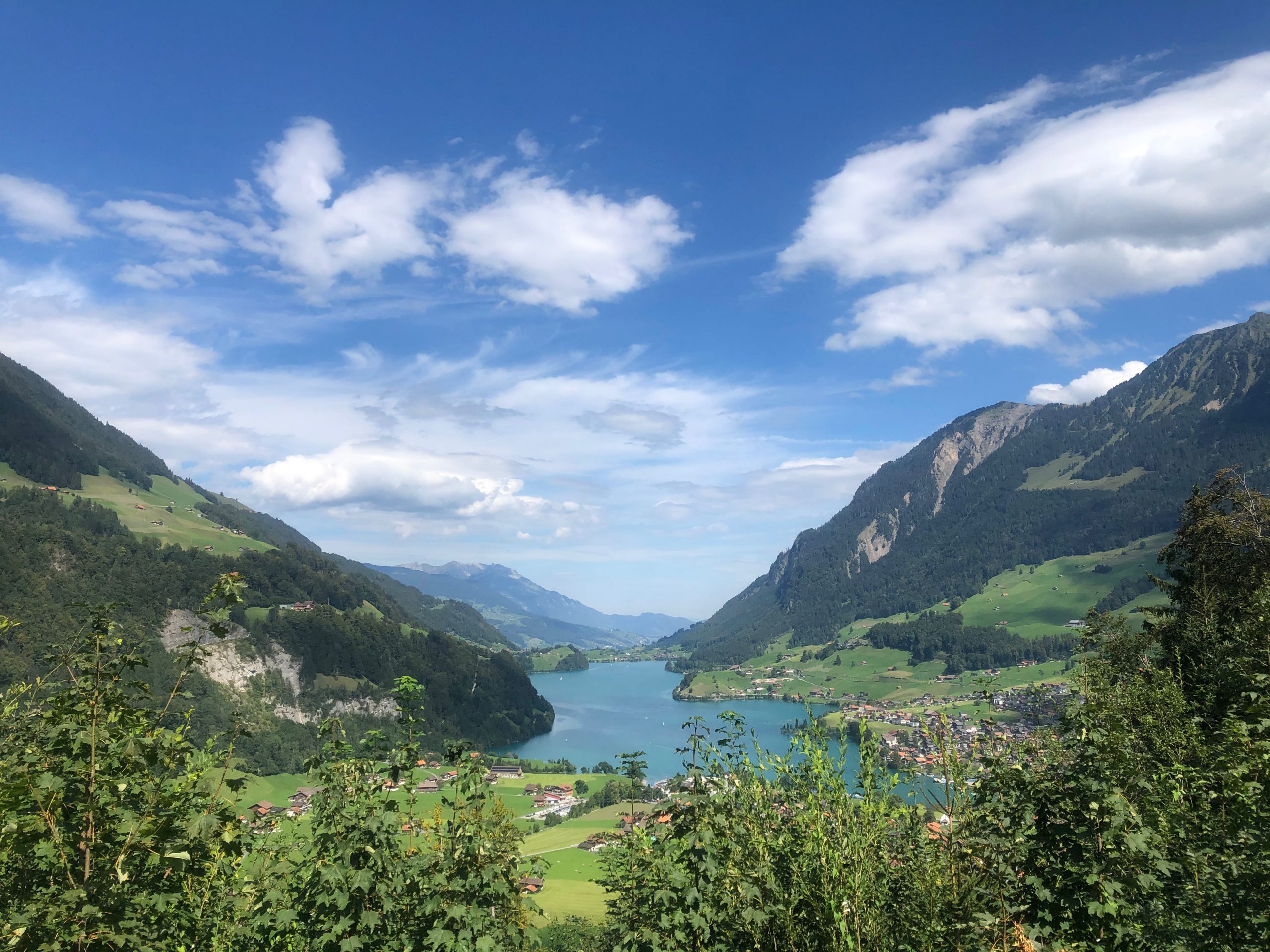 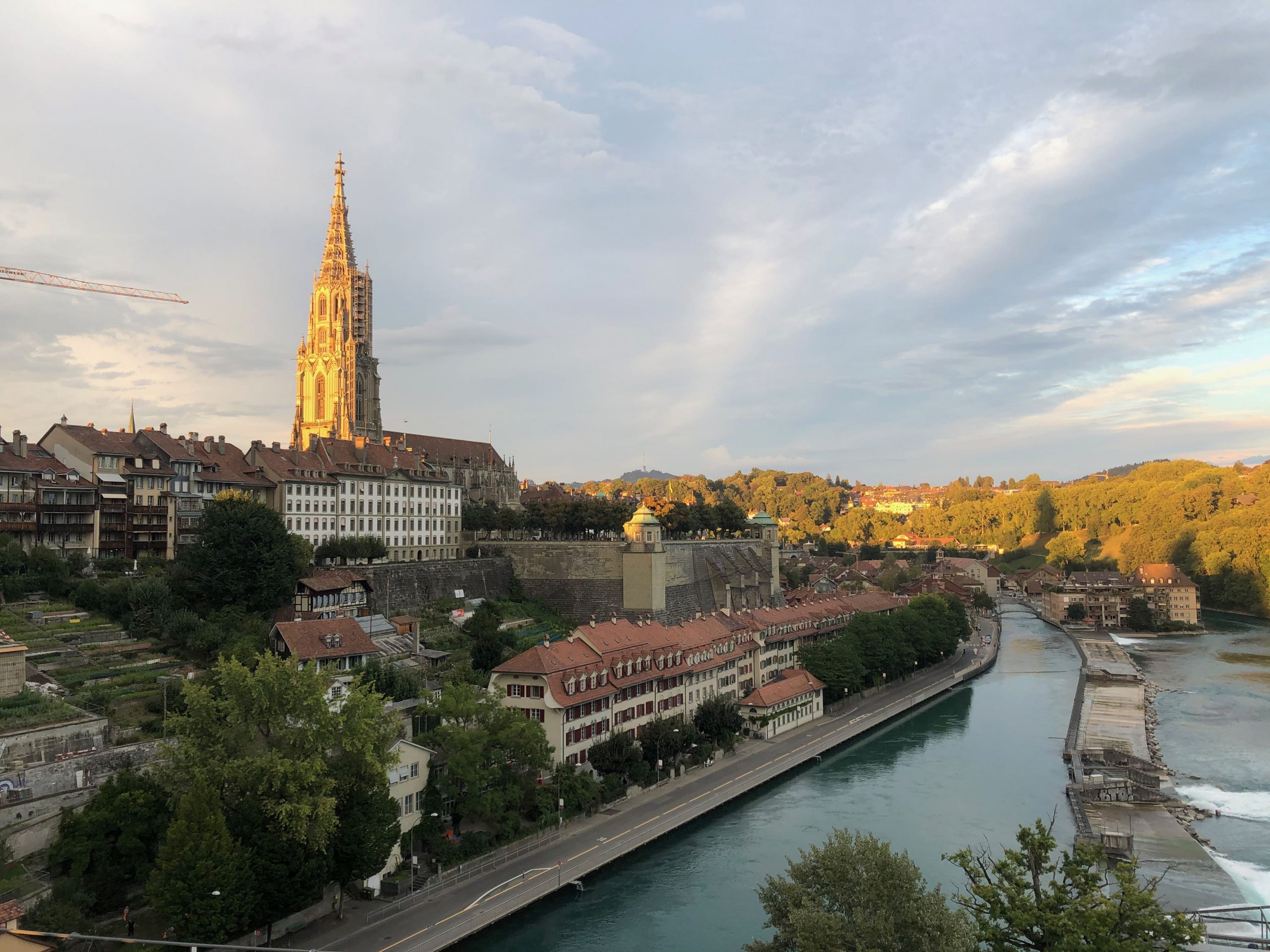 I thoroughly enjoyed this event. It changes a lot from the ones I’m used to. For sure the ones who wanted to be the first to finish didn’t sleep and did this challenge in a complete different way. My goal was to discover and re-discover Switzerland. Climb epic mountain passes and make memories for life. Job more than done ! Cannot wait for SUCH 2021 !

Well done to all the finishers and organisers for a brilliant event, see you next year.

Highlights of the week :

Special thanks to my family for supporting me on this challenge and encouraging me ! Also thanks to my bike mechanic Jean-Daniel in Céligny who prepared my bike perfectly. My mental strength coach Maayke, we made so much progress and clearly it showed during the long rides; my physio Petri for the amazing massage and strength work; and Marc for the awesome Maiday products. And thank you to all of you who sent me words of encouragement, it meant a great deal. Thank you ! 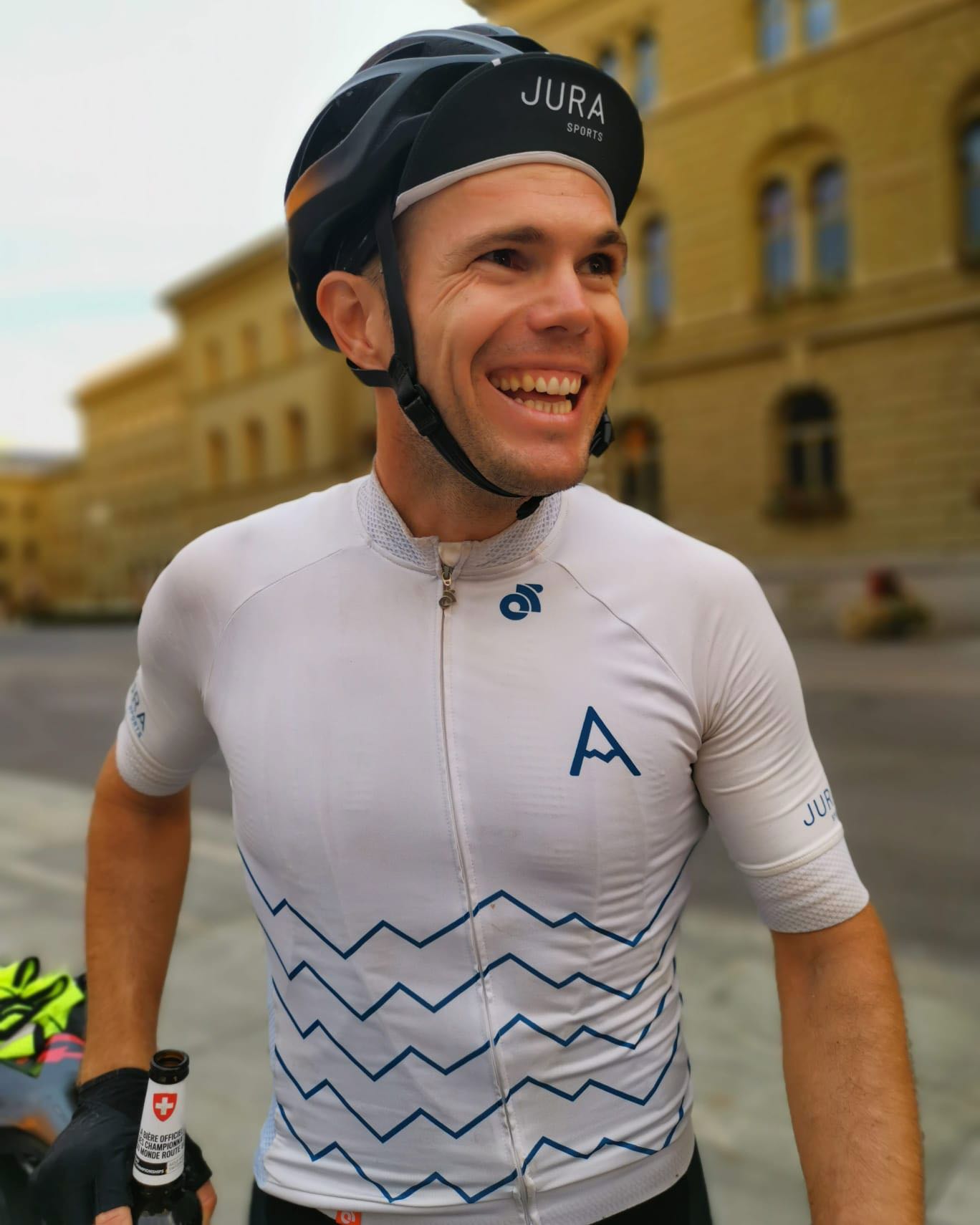 NEED COACHING FOR YOUR NEXT EVENT? FIND OUT MORE ABOUT JURA SPORTS COACHING AND REACH YOUR POTENTIAL !