Run with your dog

To run with your dog is something really fun; both for the dog and yourself! However, this can be a little daunting as you might have many questions. How far can my dog run? How fast? Which leash to take? Which snacks? I am by no means a dog expert but I will share with you the story of Nera my beautiful dog on our running journey, from failed runs to cross-country skiing and parkruns ! 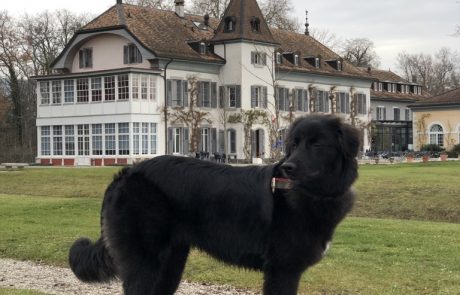 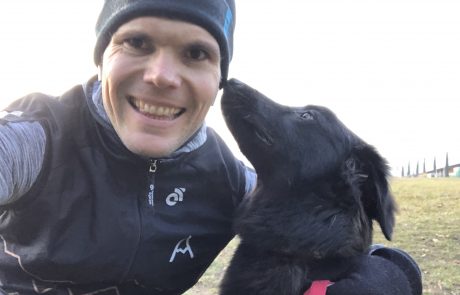 We adopted Nera in December 2019 when she was 5 months old. She was born in Greece in a refuge. Her mother got rescued to the refuge and Nera was born on the 20th June 2019 under I imagine a very hot Greek summer’s day. After a short transit to Vienna in Austria where she was first taken; she arrived in Switzerland on the 13th December.

Nera is a Border Collie mix. We don’t quite know with what. Some say Flat Coat, some say Labrador. She is black, hence the name Nera, with brown highlights and white patches. She has the most beautiful look with her brown eyes. She is very sweet and friendly with our daughters and she immediately became part of the family. 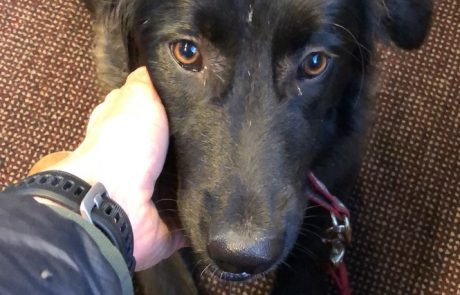 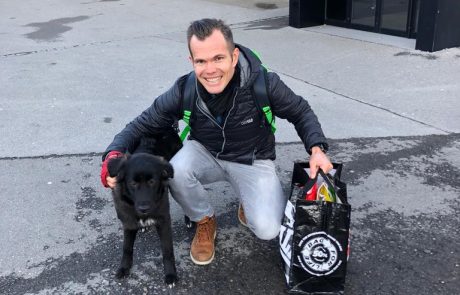 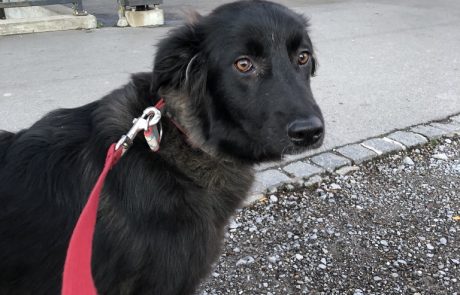 Before starting running with her we went for lots of walks around where we live so she can discover and remember the different paths and roads. She loves smelling everything! She will spend a whole walk sniffing around which can be sometimes frustrating! We went for walks also where we would eventually run, so she feels that she knows where she is. I usually walk her 3 times a day, between 30min and 1h at times. 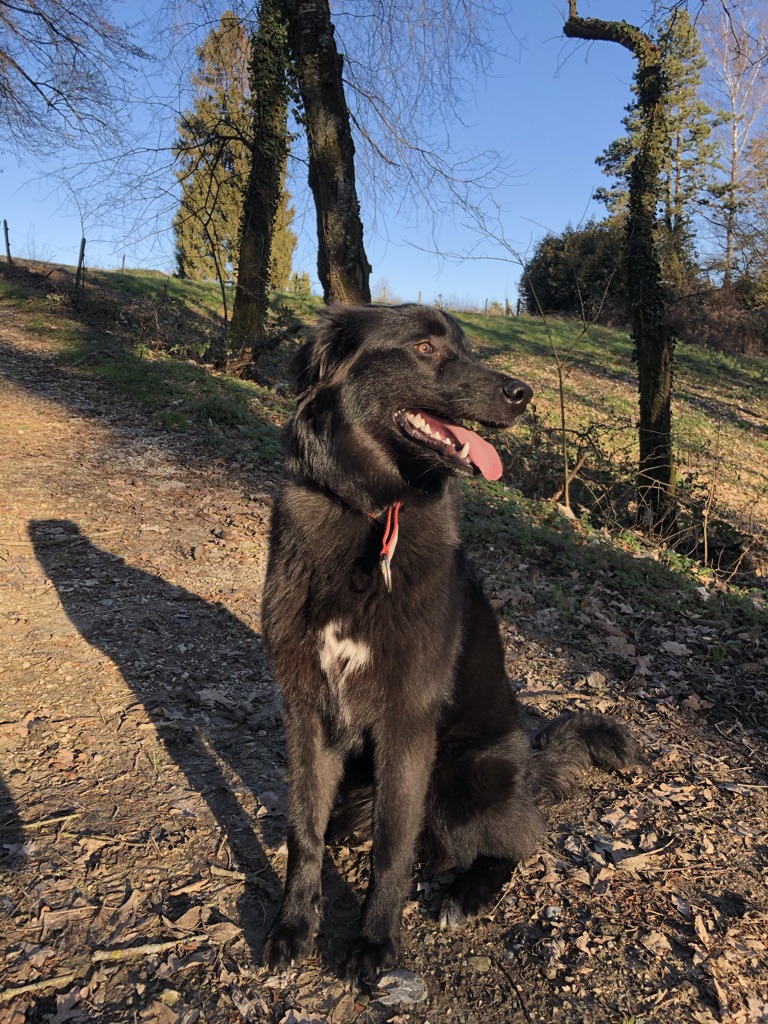 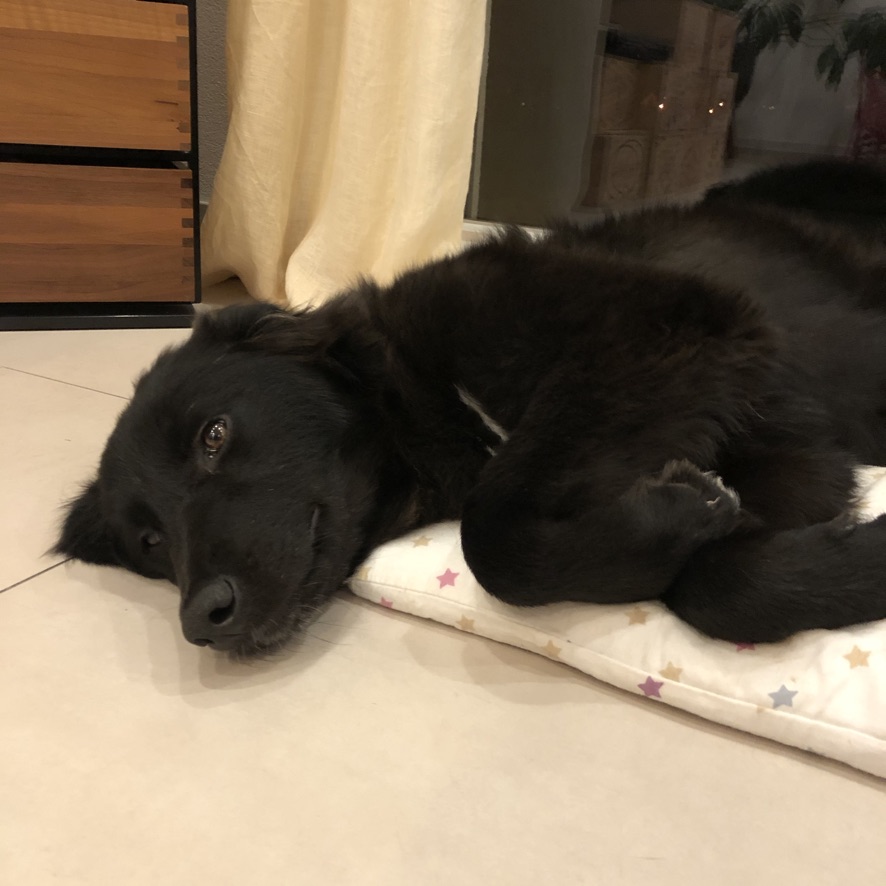 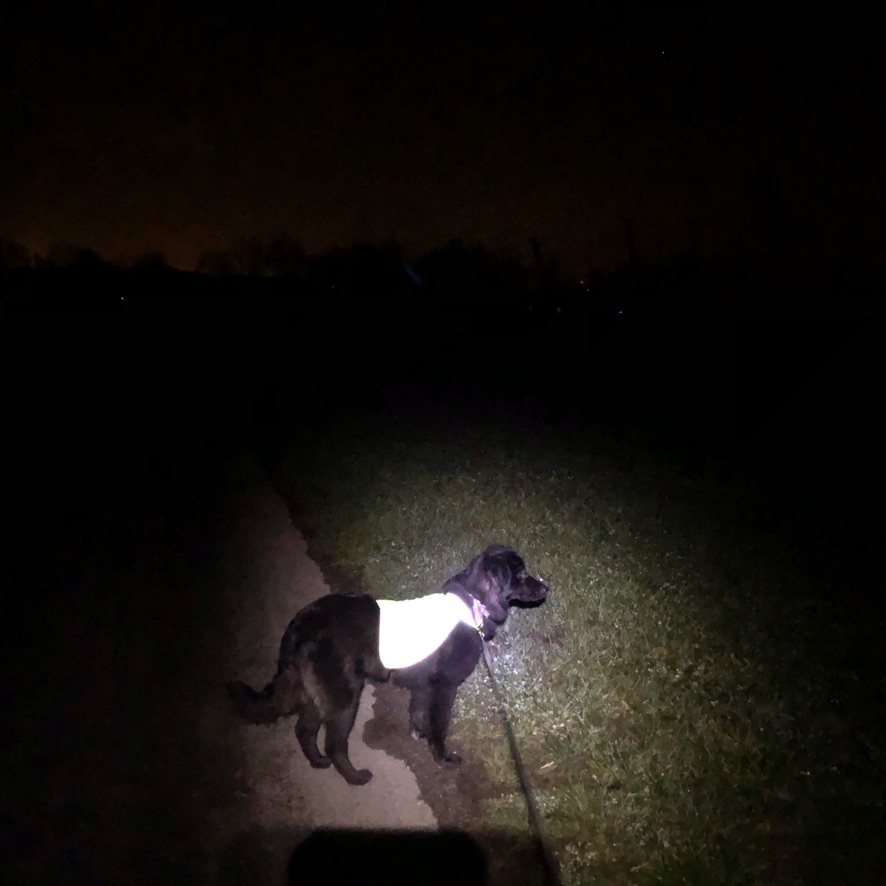 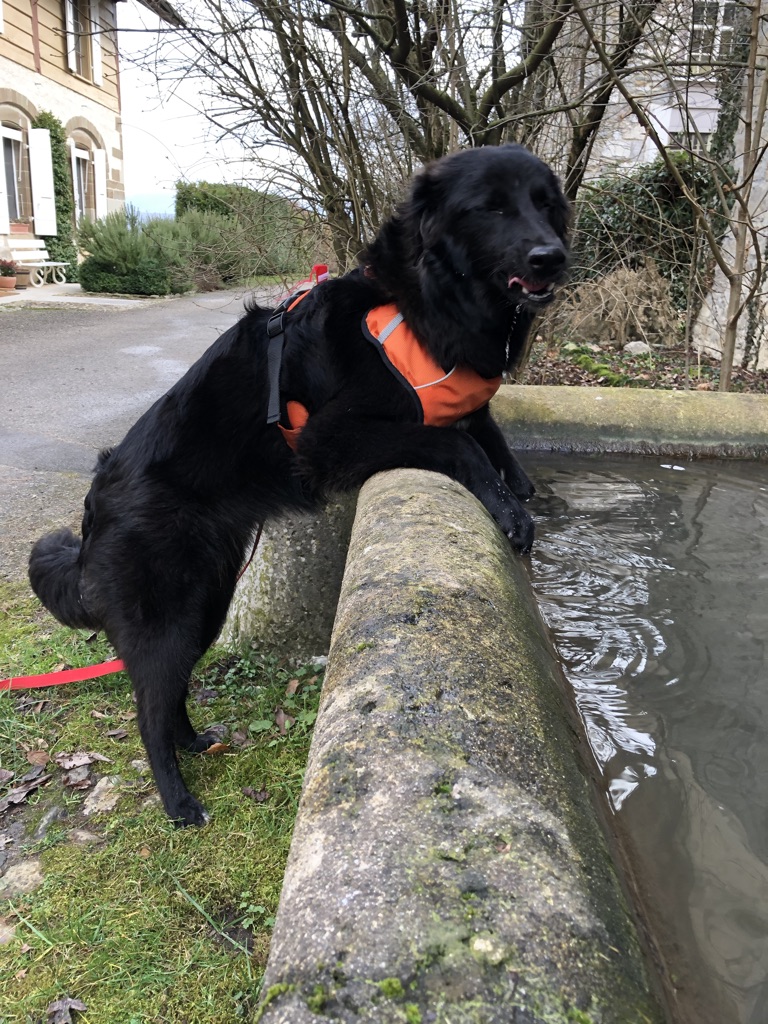 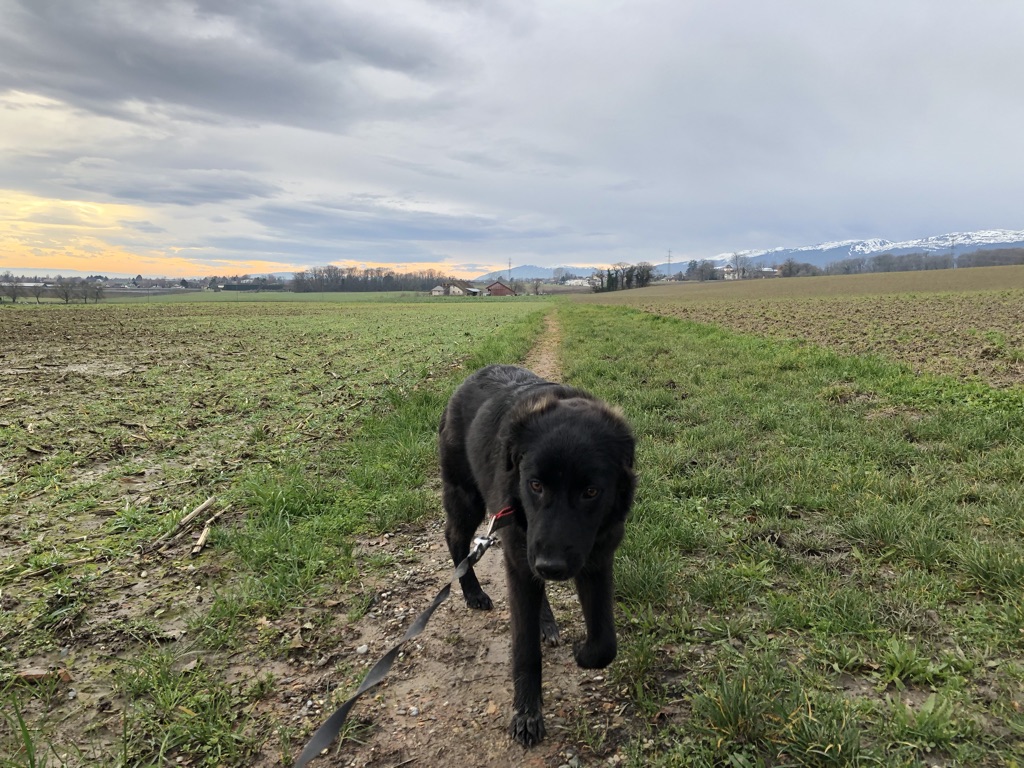 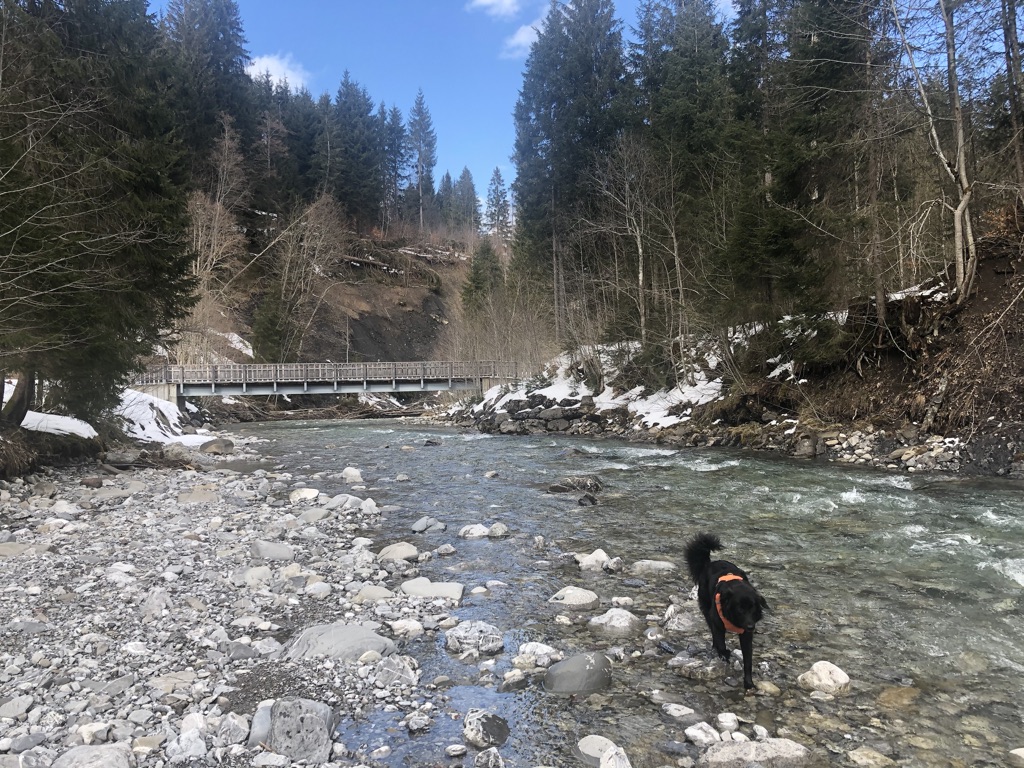 Our first run was on the 6th of January; a 5km run done in about 30 minutes. She loved it. Me too! However, I didn’t have the right material. She had her usual collar and I used a short leash. Even though it went well she wasn’t running freely and if she pulled it would pull on her neck. I consequently did some research online and found amazing products.

I also bring snacks and poop bags (I will tell a funny story later!)

When doing my research, I came across a sport called “canicross”. Basically, it’s running with your dog on trails. Wow I watched several video on YouTube and even found some races in Switzerland. I was getting a little ahead of myself (as usual). I found a company called Non-Stop Dogwear, a Norwegian company specialized in dog accessories. Norway has huge experience in dog sledging and they used that experience to create amazing products for running and cross-country skiing, also called Skijöring. All of a sudden, a new world opened up: canicross, skijöring and bikejöring! 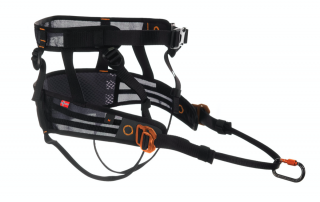 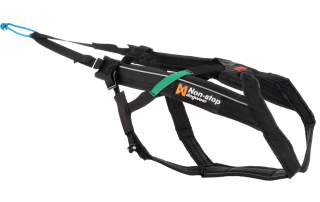 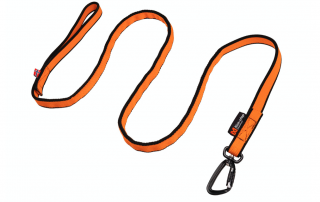 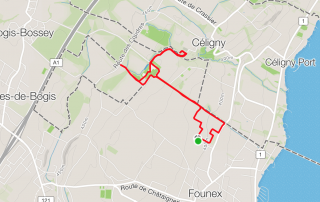 First of all I want to say that I am NOT sponsored by this brand and that this post is NOT a paid partnership. I am simply a very satisfied customer and want to share my tips with you !

You can buy directly on the Non-Stop Dogwear at www.nonstopdogwear.com

I cannot recommend enough their products ! Non-Stop Dogwear also has a very cool podcast and brilliant videos on YouTube

As an endurance sports coach I had to treat Nera not only as an athlete, but as a junior. Of course, I have plans of taking her in the mountains on my long 4-hour trail runs but not until she’s an adult. As mentioned above, first we went for walks. I walked with her 3 times a day for 3 weeks before our first run. During those walks I started to add short bursts of running for about 50 to 100m.

As a junior she needs to learn how to run properly and not get any injuries so we favor running on soft surfaces and avoid tarmac if possible. We have a brilliant loop in Founex where we live that brings us to the Céligny cemetery where Richard Burton is resting in peace, and around the Château de Bossey where the Pope visited in 2018. All on trails!

The two things I am very much aware of when Nera is running are: Firstly, avoid injuries so I limit the runs to 5-6km which takes about 30min. I will gradually increase until she is an adult at around 2 years old. Secondly is that she must enjoy herself! There are times she wants to sniff something so I have to allow her little breaks. If we cross another dog I stop to say hello. Dogs don’t know that we’re “running a 5km”; they are just having fun with their master but if they see another dog they just want to play. Her goals are totally different than mine and we have to accept that and allow space. Patience is key.

We also had several failed runs! Despite all my encouragements a couple of times Nera categorically refused to run and just sat back. It is frustrating because we changed and put on all the equipment but you should not force a dog to run. So, we either went for a walk, or I brought her home and went for my job without her. Again, patience is key!

When running I always encourage Nera throughout the whole run. I use specific words such as “Bravo” in an enthusiastic way. She knows that she is doing well by hearing my voice. I also need to push her a little bit so here are my key words. We speak German with her.

These are basically the 6 words I used during the run. Dogs are very clever and they understand very well. It will take time for her to obey properly but patience again is key. Consistency is also key. I have used these words so now I have to stick to them! 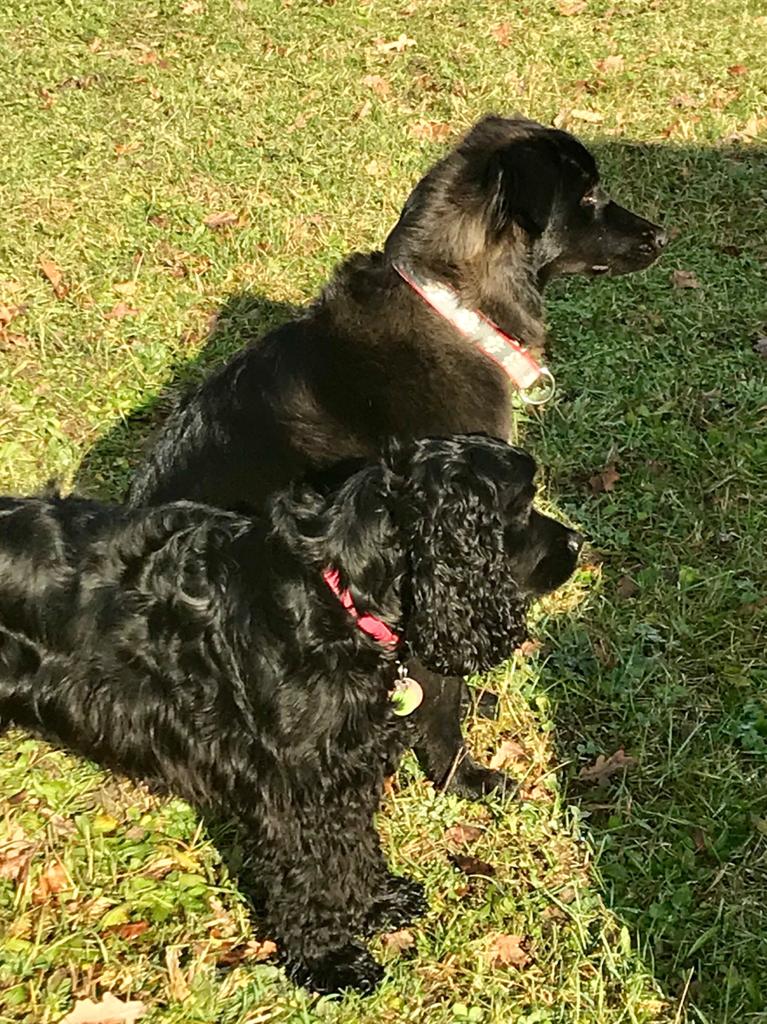 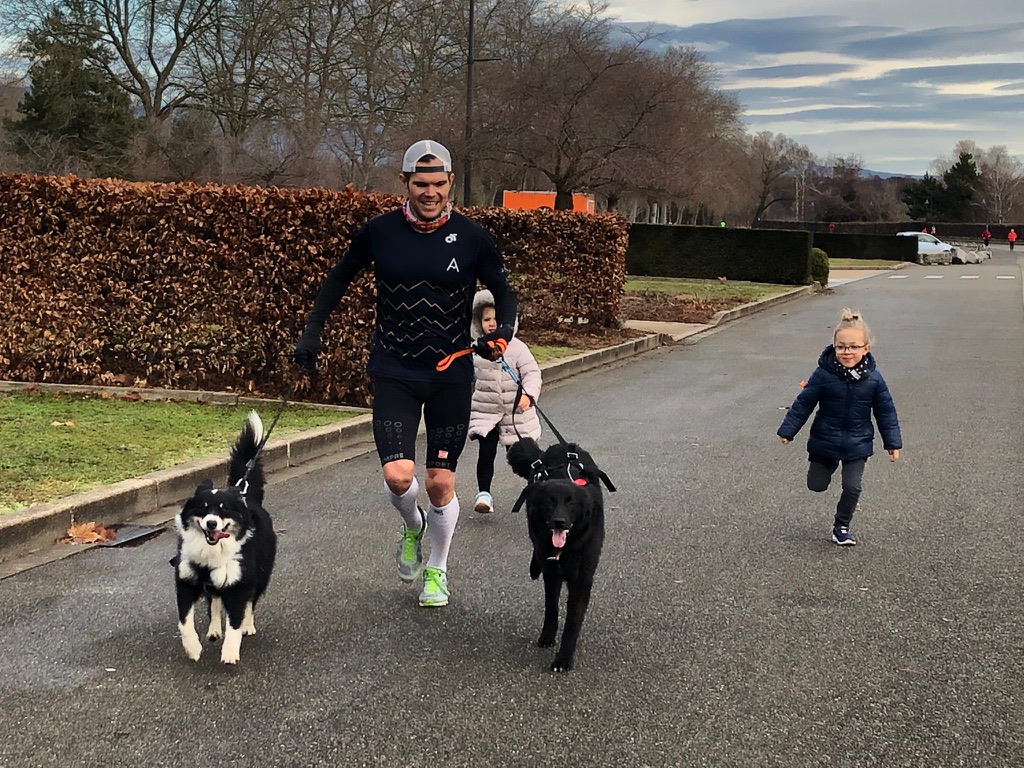 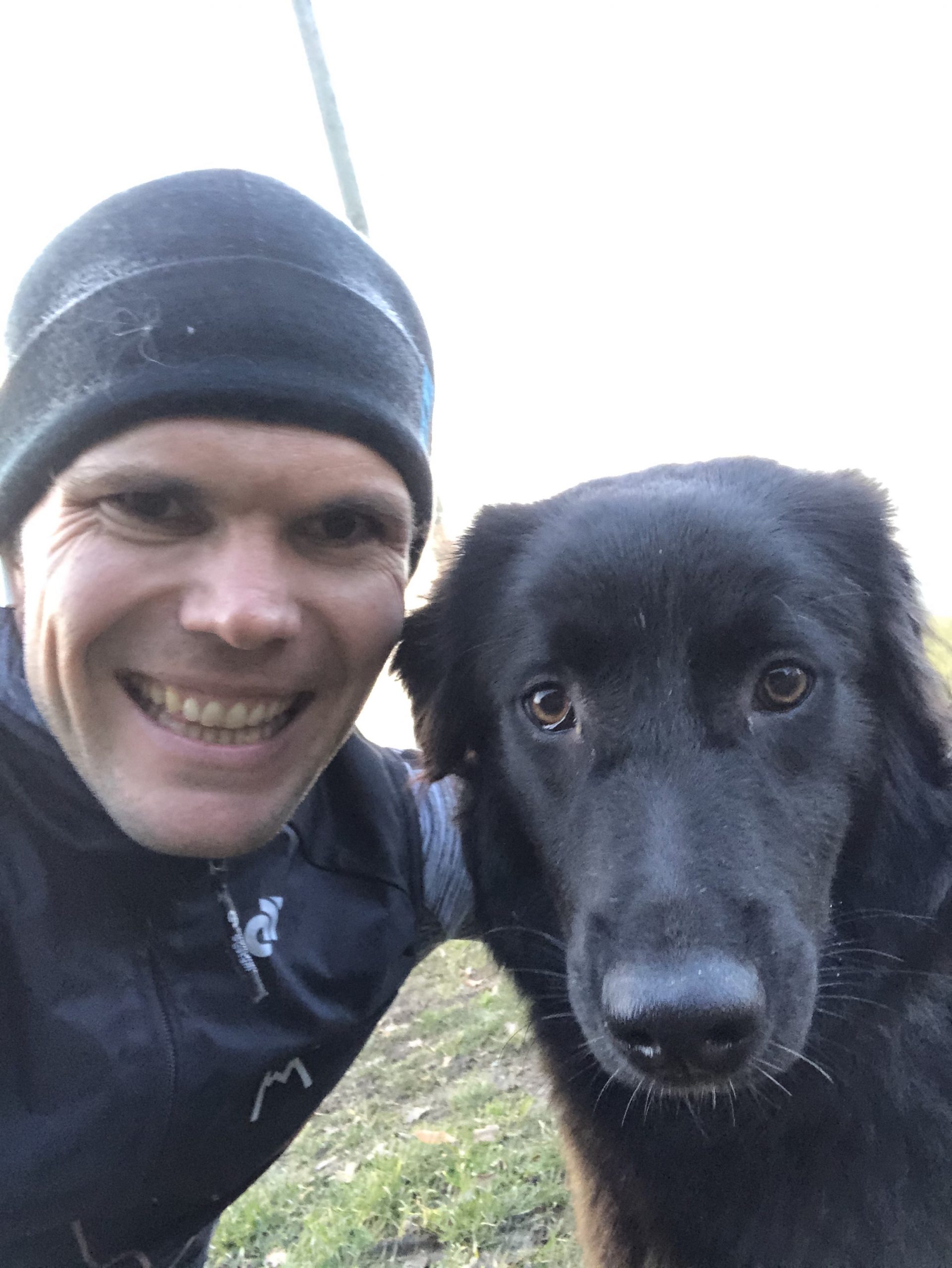 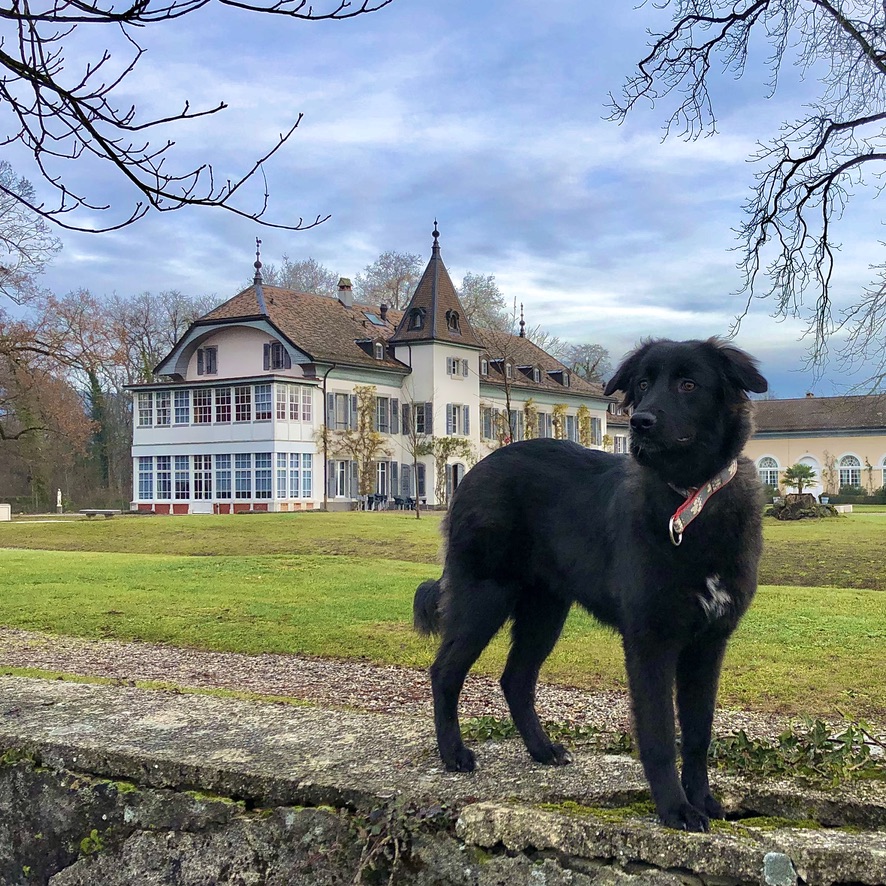 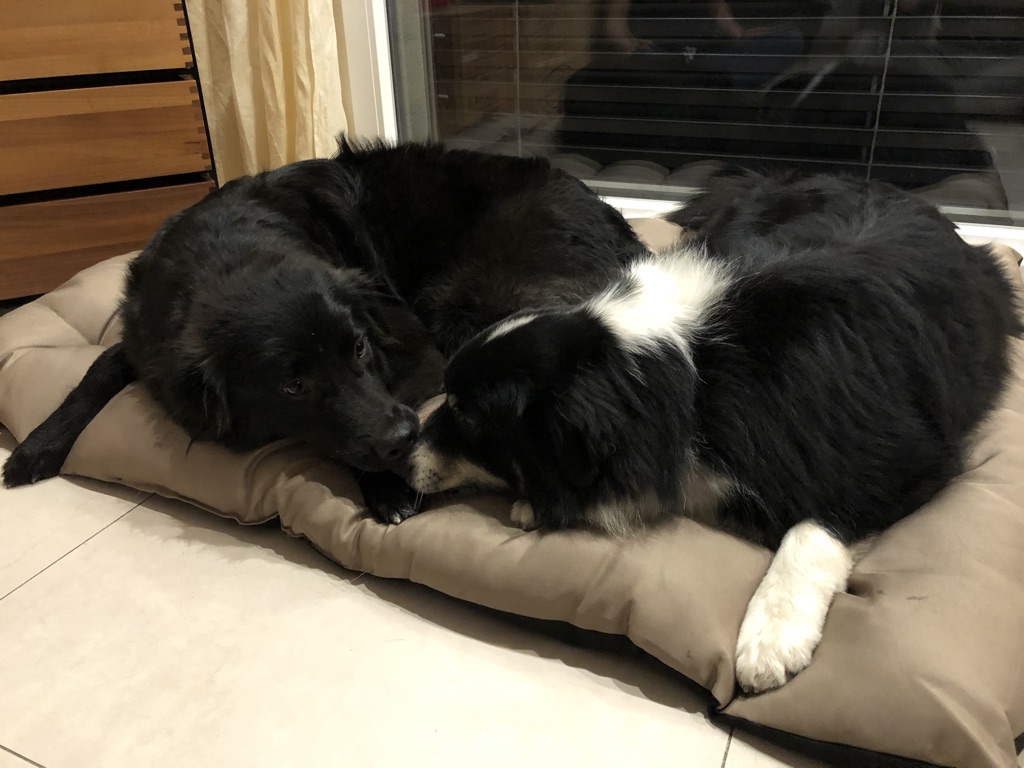 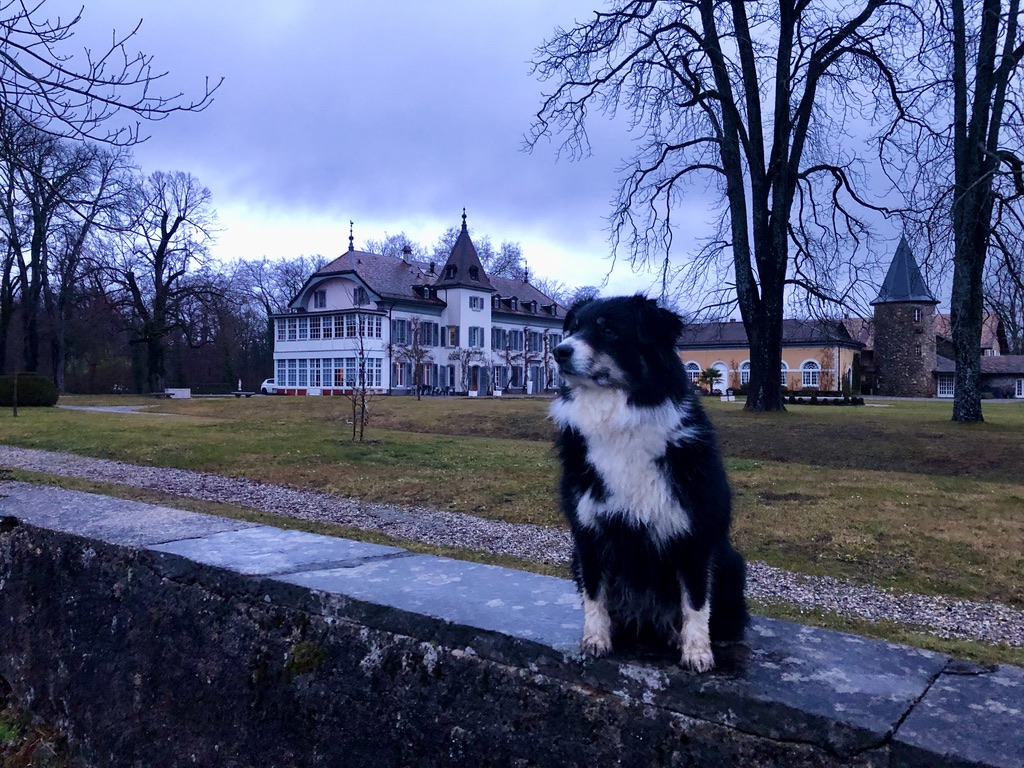 How do I fit this into my program?

I am training for an Ironman in June in Hamburg. How can this fit into my program? Well very easily actually. During the winter in any case I try to limit my running as I run more than enough during spring and summer. I will go about 3 to 4 times a week with Nera for 5km runs. I always go on hilly and trail terrain, which is good for her and great for me as it develops strength, agility and keeps my heart rate very low as she isn’t that fast yet. If I need to do a longer session I will go with her for the first 5km which I consider my warm up, and then I can add another 30min or so of intervals and more intense running, or go for my long run after that. Yes it requires a little preparation and you won’t have the greatest average pace on Strava; but you will have a happy dog and running “freely” or by feel is very helpful in any program.

During our holidays in Austria we even tried Skijöring! Basically its cross country skiing with your dog. Nera absolutely loves the snow but I was a little nervous if she would lead the way or just go crazy and pull me in all directions. To my surprise she did amazingly well. From the start to finish she was leading and loving it even when we were going very fast on some descents. We did a very nice 5km look in Kleinwalsertal called the Steinbock Loipe. Not all cross-country skiing areas accept dogs, so please check before bringing your dog along. Also, for skiing you need a bigger leash than running. For skiing I use the 2.8m bungee leash, and when running the 2m leash. This makes a big difference as with running I can stop very quickly, and with skiing there is a bigger gap and the skis are also there so the longer leash prevents me from touching the dog’s back legs.

Nera will keep on running her 5km loops and Parkrun. Oh my funny story at Parkrun… I was running with Nera and Louna (another border collie dog from my friend Rachel who created Parkrun Divonne) and had a little bit of a disaster run… both wanted to play and not necessarily run… Nera made a big poop in the middle of the road and I had forgotten my plastic bags… luckily another runner had some spare and I managed to clean it but I felt a bit silly in the middle of 70 parkrunners!

Running with your dog is great fun and I really encourage everyone to try. I would love to hear from you and your stories with your dogs. Please send some pictures so I can add them to this blog or onto our page. 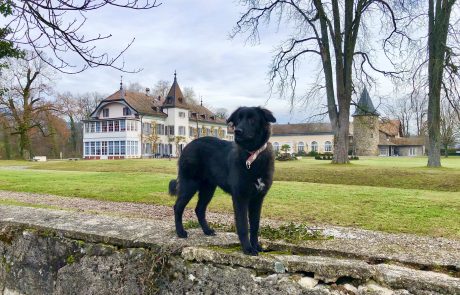 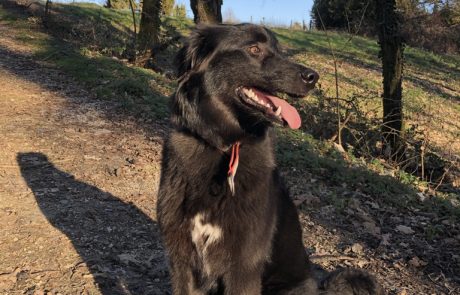 If you want to know more about running with your dog, contact me at thierry@jurasports.com and I will try to give you my best tips !