This week we meet Kiwi marathon runner Rachel. She enjoys every distance from Parkrun to marathons and also ventures onto trails. Rachel lives very near, in Founex, and our children go to school together. I started coaching Rachel a few months ago in her ambitious quest for a 3h30min at Barcelona marathon. She is a regular at the Founex Night Run and the Jura Trail Run so I have monitored her progress closely and I can’t wait to see what she will achieve at the Barcelona marathon !

Tell us about yourself

I’m 37, originally from New Zealand now living in Founex, Switzerland with my husband Iain our three young daughters, our eldery dog, young cat, ageless tortoise, and countless stick-insects.  I’m a keen gardener. I enjoy travelling. I practice yoga. I love a good book and I like a nice single malt.

As a family we love to enjoy the outdoors, in the summer we spend a lot of time at the local plage, during the winter we try to get up to the mountains to ski whenever we can. At home we eat mostly plant-based and follow a fairly healthy lifestyle. I’m grateful our girls are also interested in healthy eating and staying active. 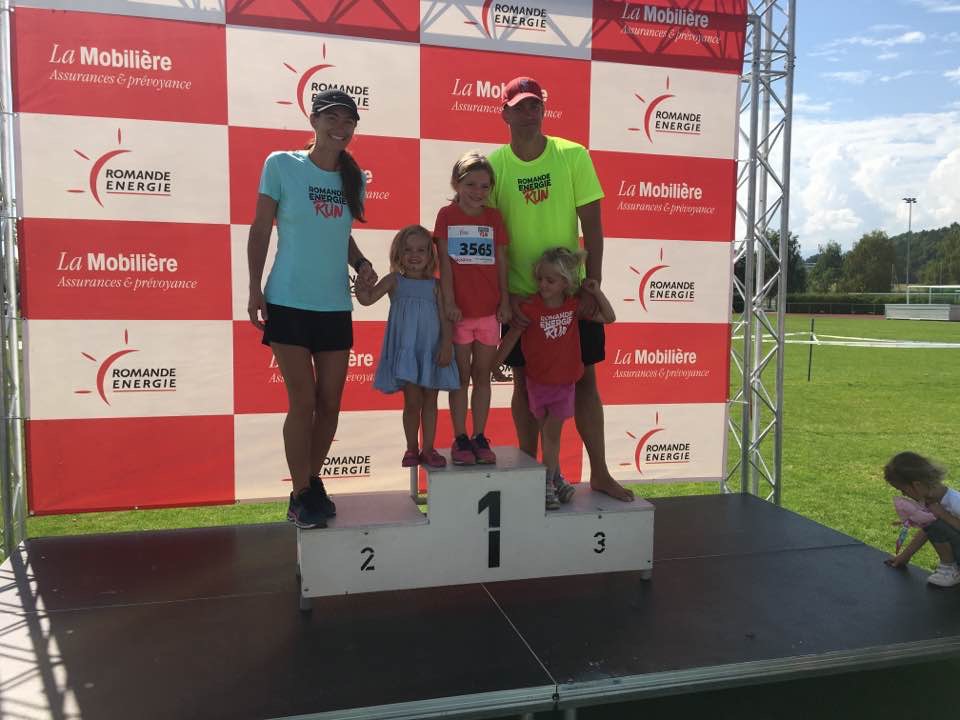 How did you get into running ?

I was 29, I had just given birth to our second daughter and I needed an escape from the house. Initially it was just an occasional short run along the river where we lived, without a phone or a watch, just mindless running. It felt amazing to physically run away from the household and to see our neighbourhood – without pushing a cumbersome stroller.

I liked running for the time alone; seaking mental clarity rather than for fitness or weight loss. Then after the birth of our third daughter a friend encouraged me to log my runs on a social running app. That’s when my running changed and I started to run further and faster. I wanted to push myself more.

Our third daughter was 4 months old when I competed in my first Geneva half marathon. I loved it. I wanted to set my sights on a full marathon one day, but it still felt like a very distant long term goal. Even the idea of training for a marathon felt daunting.

Eventually my brother took up running too. With his encouragement I signed up to run the Athens Marathon with him. We liked that it was the ‘original marathon’ from the battlefields of Marathon finishing in the Panathenaic Stadium in Athens. It seemed perfect for our first marathon.

The Athens marathon was amazing, I loved every minute of it, I was so happy taking in the atmosphere of the event. From about 25km I felt a lump in my throat, I was welling up knowing my first marathon would be over soon, I didn’t want it to end, I was having such an amazing time. All the training and sacrifices all the mental energy I had given to this day, it’d all soon be over and I could never again run my first marathon. Perhaps that’s when I knew I had to keep running and Athens wouldn’t be my last marathon. 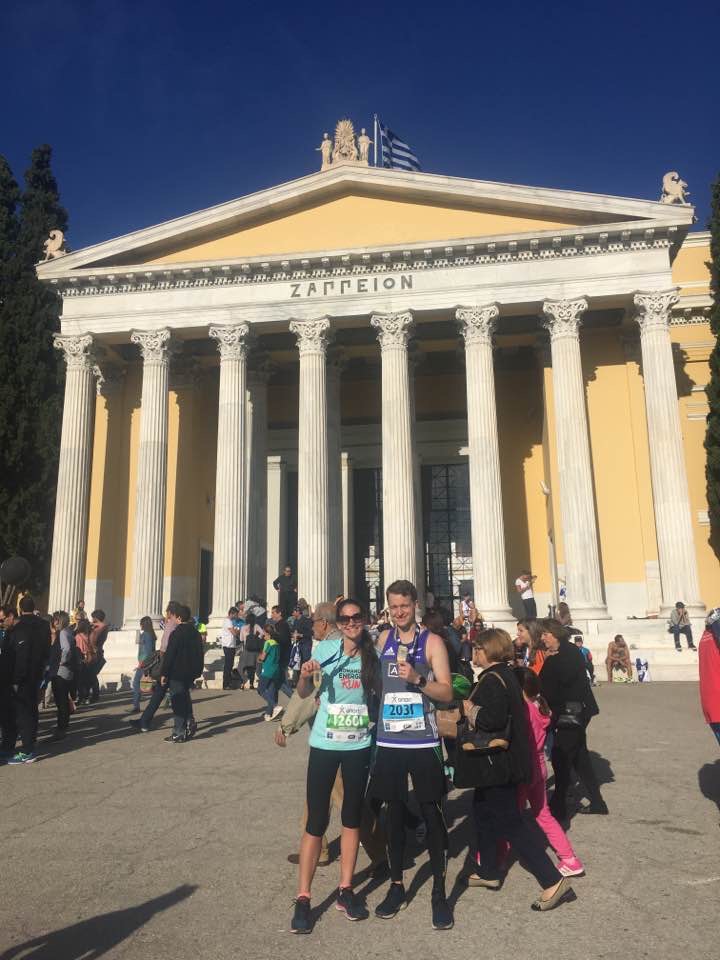 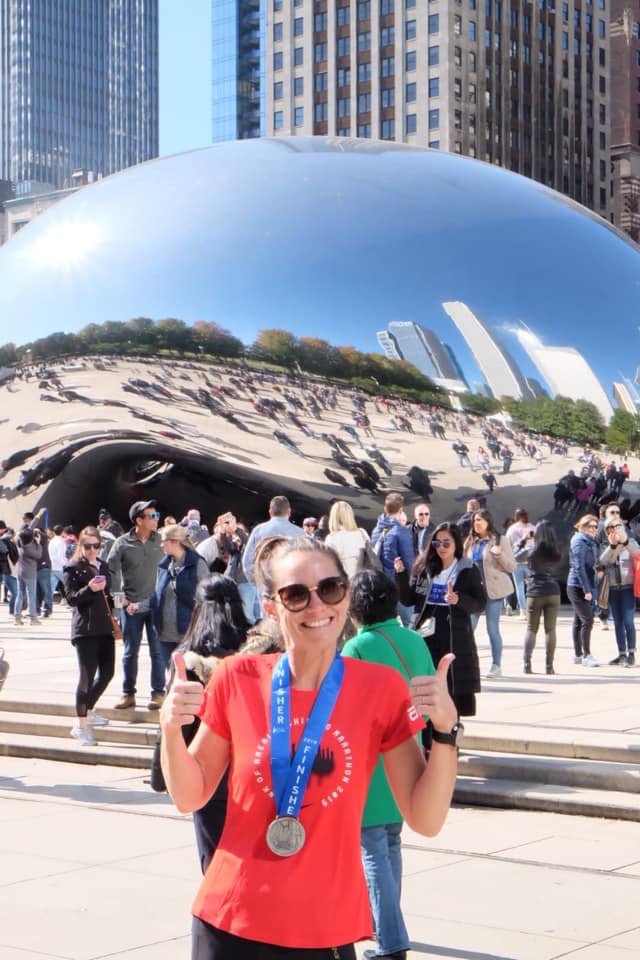 What is your greatest sporting achievement to date, and what are you currently training for ?

Since the Athens marathon in 2016 I have completed a further 3 marathons: Geneva 2017, Paris 2019 and Chicago 2019. Currently I’m training for my next marathon in Barcelona this March. I’m hoping in Barcelona to finish with a ‘good for age’ time to qualify for another marathon major. My goal is to complete the 6 major world marathons. With Chicago already under my belt I’ve got Tokyo, New York, Boston, Berlin and London to look forward to.

I’m not sure I have a greatest sporting achievement as such, but I do feel fortunate to have enjoyed every marathon and half marathon I’ve raced so far. I’m a fairly average ‘middle of the pack’ runner. I run because I found a love for running. I’m faster than I was last month and fitter than I was in my 20’s. I’ve lost weight, my body shape has changed, I’m happier, I am achieving my goals and I feel good about my fairly average running achievements.

What is your favourite race/event ? 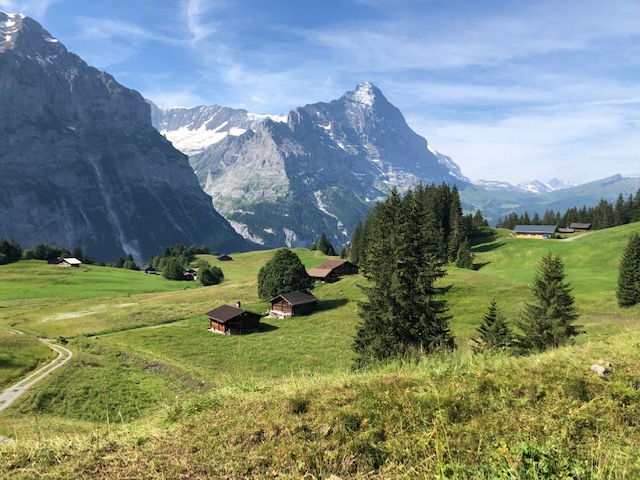 9am Every Saturday I run in the Parkrun at Lake Divonne. The park run is a free weekly 5km for anybody of any running ability, organised entirely by volunteers. I like to push myself against the other runners and I really enjoy the friendly social aspect. Often my family joins too with our kids on their bikes or rollerblades.

We love to get involved in local events as a family. Every year we run the Geneva Escalade in December and the Harmony Geneva runs for Unicef in May.

I’m not sure I have a favourite event. Something a little different was the Eiger 16km ‘Pleasure Trail’ which I ran last summer with my brother and my husband Iain. We wild camped near the start line alongside some of the amazing 100 – 150 km runners. The course scenery was stunning, I spent a lot of the race gawking in awe at the surrounding mountains. The Eiger has planted a trail-running seed for me, I’d love to get into some more trails this summer and I look forward to joining Thierry and the team for more of the Jura Sport organised trail runs.

What are the biggest challenges you face when training ?

When training my biggest challenge is in my head. I can lack the motivation to get out for a run, especially if the weather is grim. I struggle to drag myself out of bed early to run and sometimes I find it difficult to prioritise running. Without much of a fixed daily schedule I will always have chores, childcare and errands which come first, mother’s guilt is never far away.

Where’s your favourite spot for training ?

Living where we live there are loads of great running spots. Near our house we have some lovely rolling hills with views of the lake and surrounding mountains. I also like to get to the UEFA running track in Nyon when I can too, if I go in the morning I can have the complex to myself. 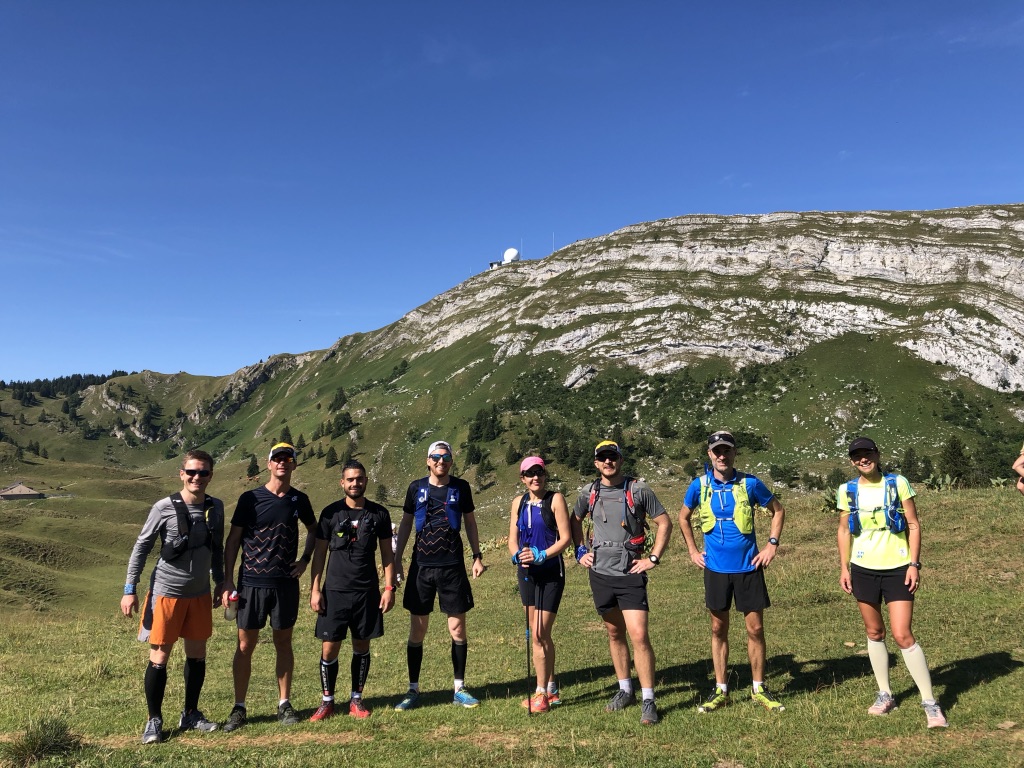 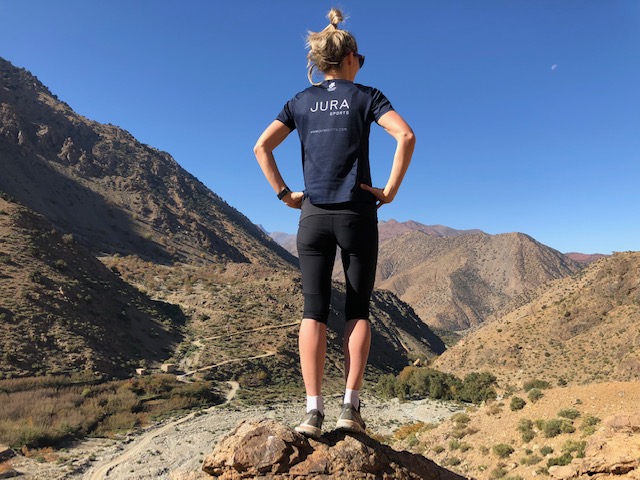 Where do you get your motivation from ?

Often it’s from other people. I love to talk about running and listen to others talk about running. Hearing about different races, different highs and lows, sharing tips and pointers. It’s inspiring how many people came into running later in life and are now crushing it.

It also really helps me to follow a plan. Thierry has been coaching me during my training for the Barcelona marathon. Looking ahead on the plan and knowing what I need to do as well as seeing how I could potentially improve is a great motivator.

What is your pre-race breakfast/food and post-race recovery food ?

Before a long run I cook oats in water with a little salt and maca powder. I eat the oats topped with cinnamon, banana, maple syrup, hemp and chia seeds. I’ll usually take a snack of dried mango and almonds with me if I’m running more than 15km.

After a long run I gulp a tablespoon of apple cider vinegar diluted in a cup of water. I try to eat something soon after a run, usually peanut butter & banana or avocado on rye toast or leftovers from the fridge. We stick to a plant-based diet at home, so lots of fruit and vegetables. After a race, I like a banana and a big ice-cold beer! 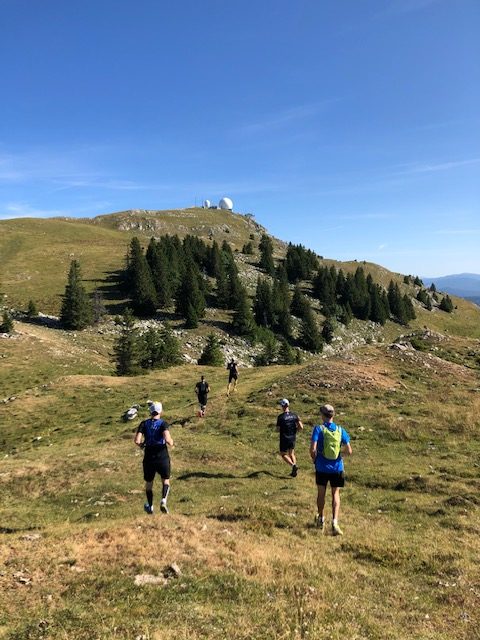 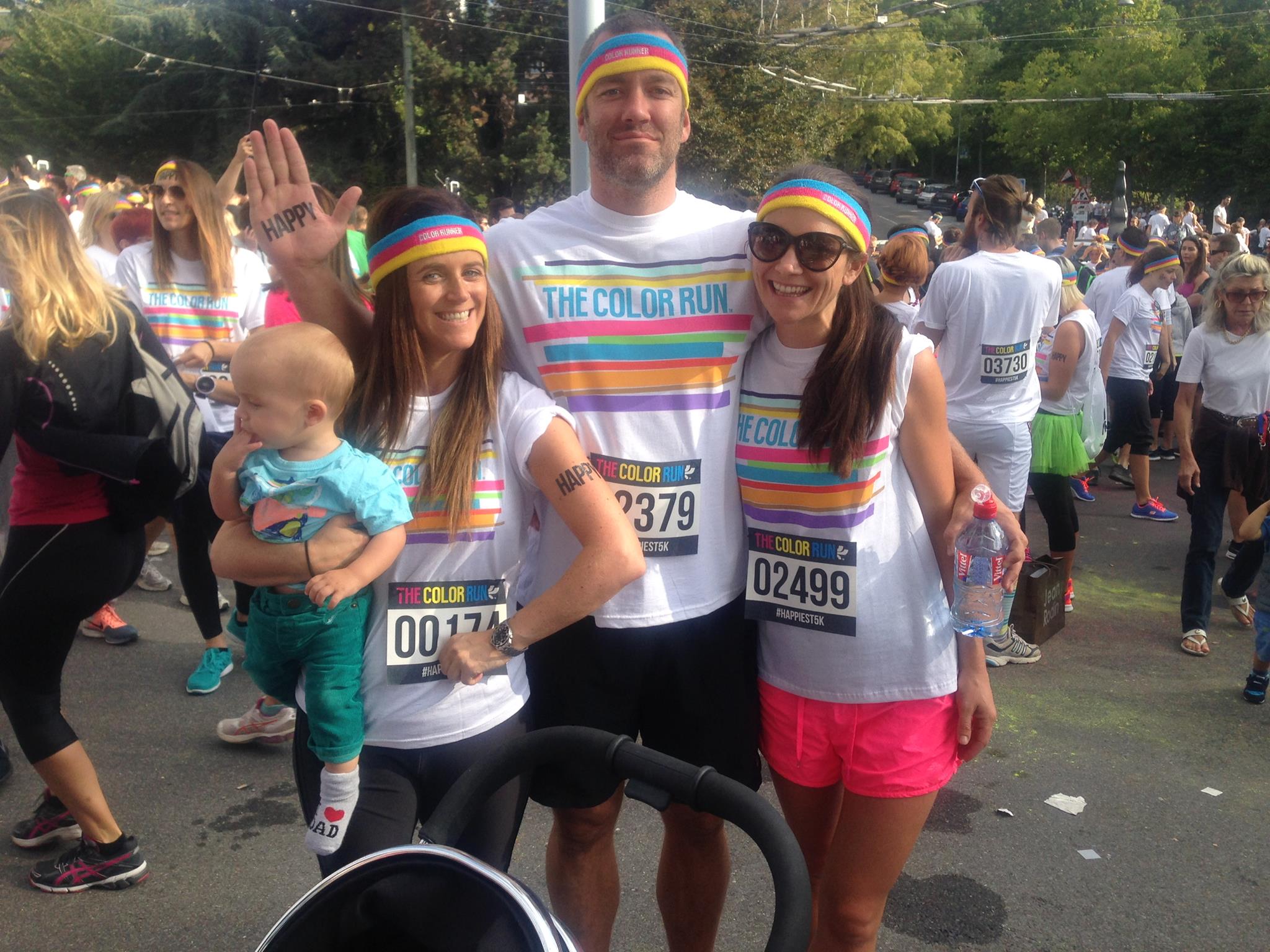 Why do you love running?

I love seeing the change of seasons. Appreciating the light, the sounds, enjoying the peace. Running is my escape, my calm. When I run I can find mental clarity, I can be creative, motivated, strong, fit, fast and full of ideas with endless dreams. I can also be completely void, in a silent peaceful state of mind. From time to time, when I’m really lucky and if I really push myself, go a little further and a little faster than usual, I reach the elusive ‘runners high’.

We wish all the best to Rachel at the Barcelona Marathon on the 15th March and can’t wait to see her performance after her very impressive training through winter. For sure we’ll here from her again as she will not be stopping here…!

NEED COACHING FOR YOUR NEXT MARATHON? FIND OUT MORE ABOUT JURA SPORTS COACHING AND REACH YOUR POTENTIAL !