This week we meet Geneva based cyclist Isabel Deconinck who competed at the Etape du Tour in 2018 and 2019. Isabel works in Geneva for an international company, she is married and has two beautiful daughters. Needless to say, she is short of time ! When I started coaching Isabel, she asked me to make her a programme so that she can race the Etape in 2019, and not just participate. She is highly ambitious and is also representing the brand LIV Cycling. The problem is that she had very limited time and we really had to focus on quality versus quantity. Please meet Isabel !

Tell us about yourself

I’m 39 years old, was born in Bruges,  Belgium, lived in the Geneva area for the past 30 year. First in Versoix, then in Bellevue, and then moving to Plan les Ouates.

I am married with 2 busy and very talkative girls, Eline, almost 5 and Charlotte, almost 3.

My husband Olivier and I met as runners, training for a marathon in 2009. We both moved from running to cycling in the past few years as running injuries multiplied…

We both love the mountains and spend most of the weekends winter and summer in our chalet in les Carroz, from where we can see the steep turns of the Col de Romme, one of the final ascents of the Etape 2018..

That place is cycling paradise: famous Tour de France cols all over. Every year, Olivier hopes for an Etape arrival in Flaine….lets see if that happens one day.

I work as a Strategy and Marketing manager in the world trading division of Cargill and for the pat 5 years had the luck of not working on Fridays while the girls went to the creche. Friday was cycling day….and that definitely helped me get into shape. As of September, Eline will however start school so I’ll have to give up my Friday for her Wednesday….sacrifices of a cycling mom. But when it comes to finding time to train I can get quite creative so am sure I will find a solution.

When I don’t work, look after the kids or cycle…I sleep. Days are just too short and weeks fly… 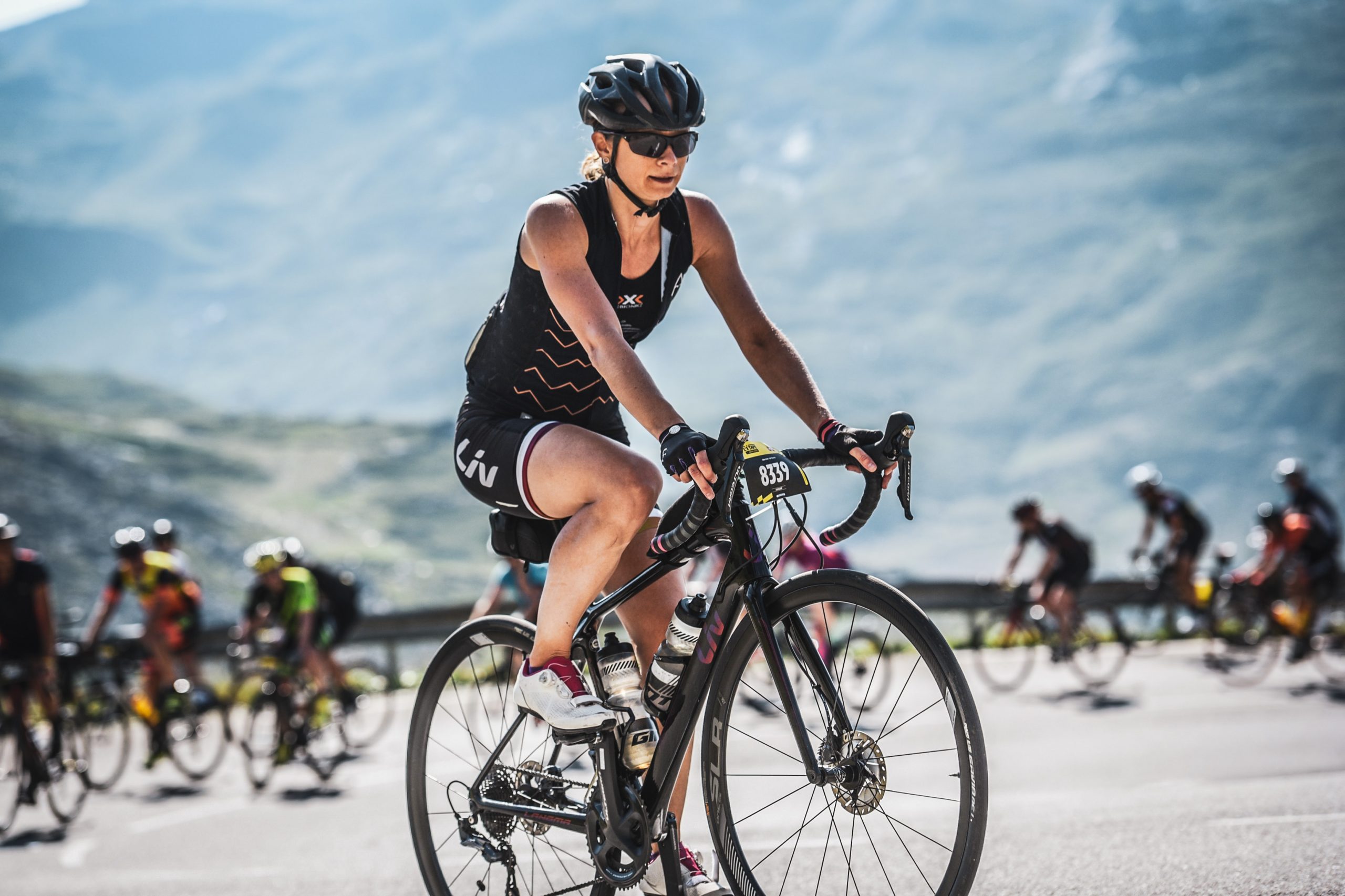 How did you get into cycling ? 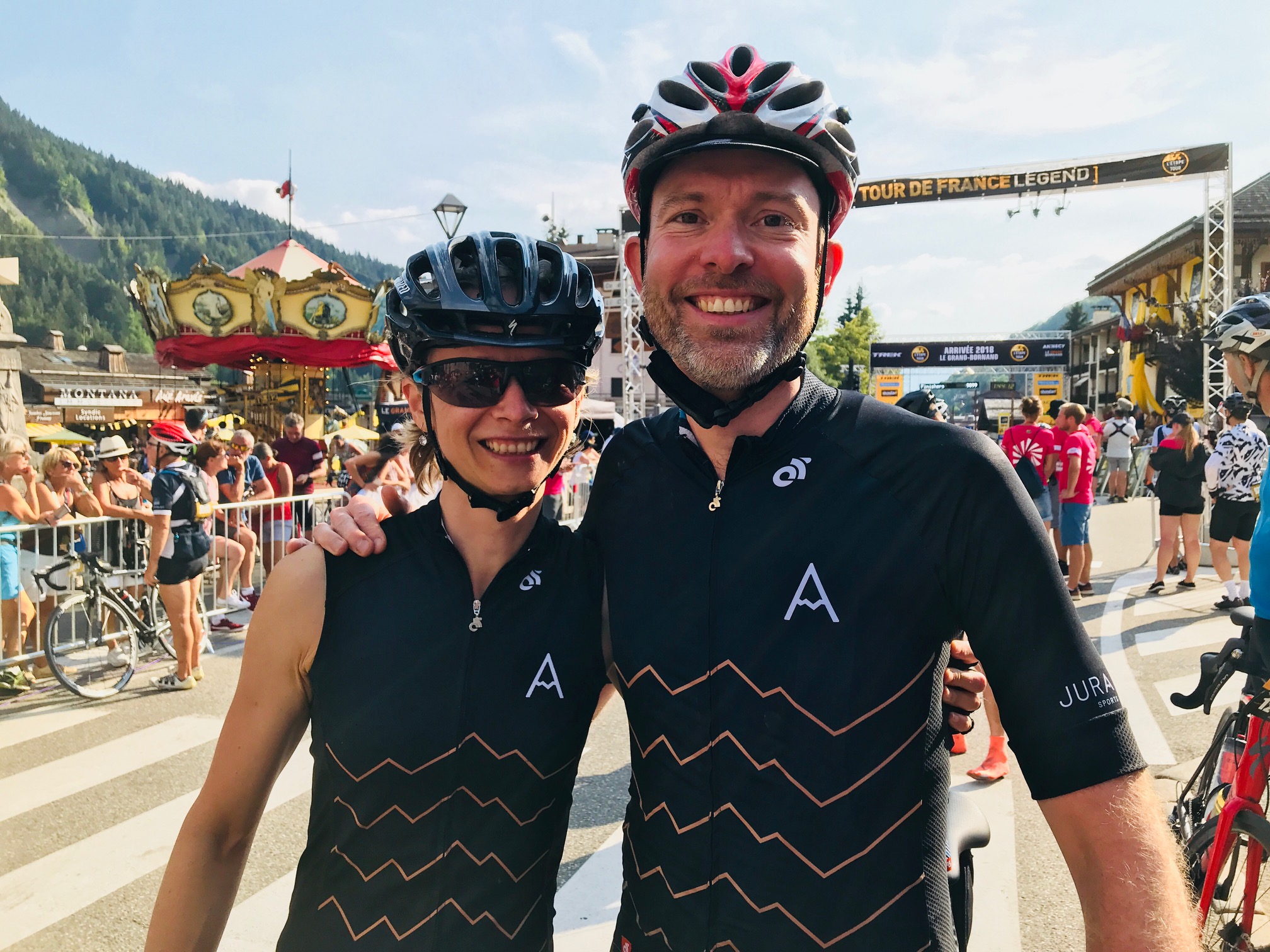 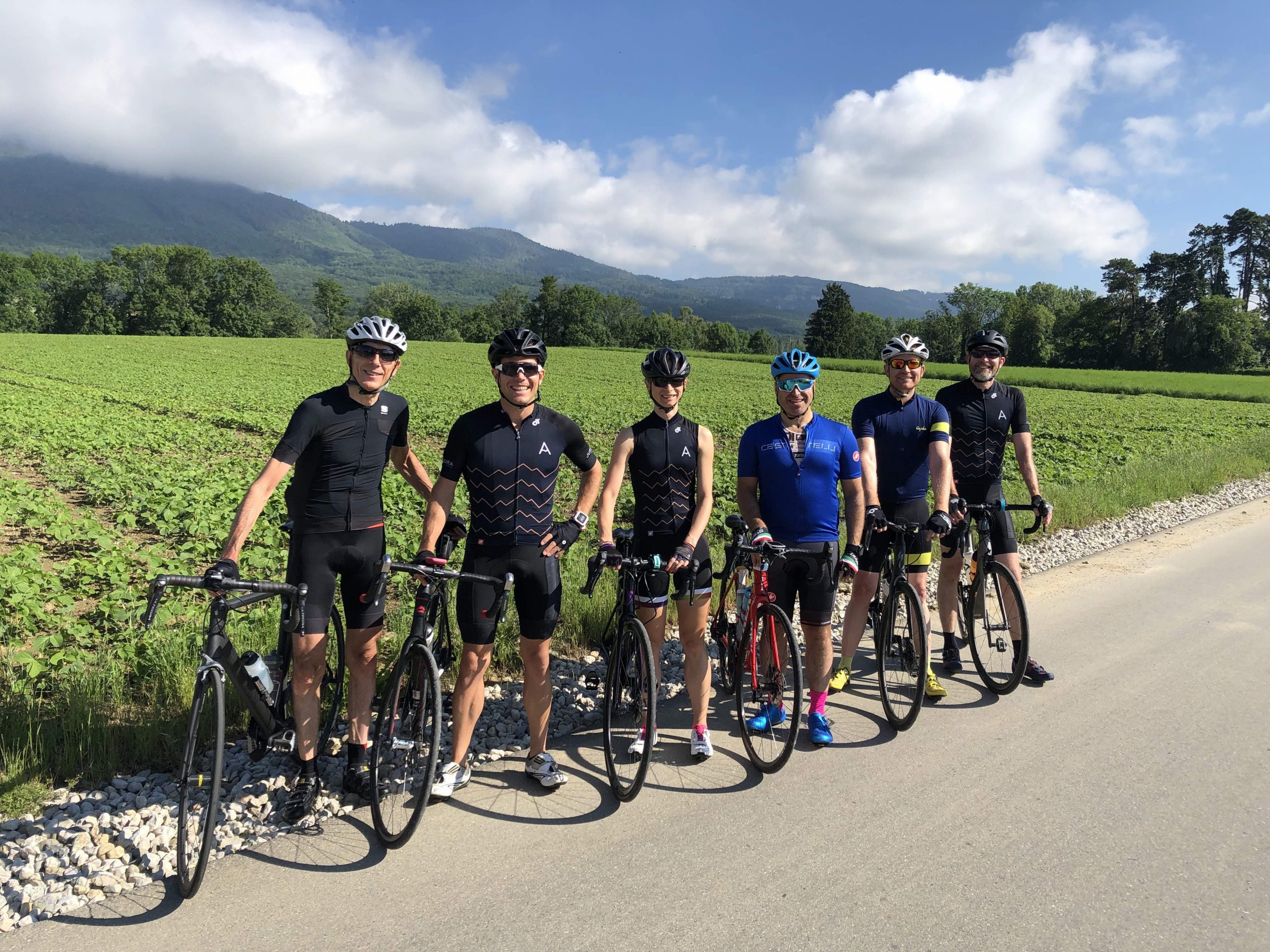 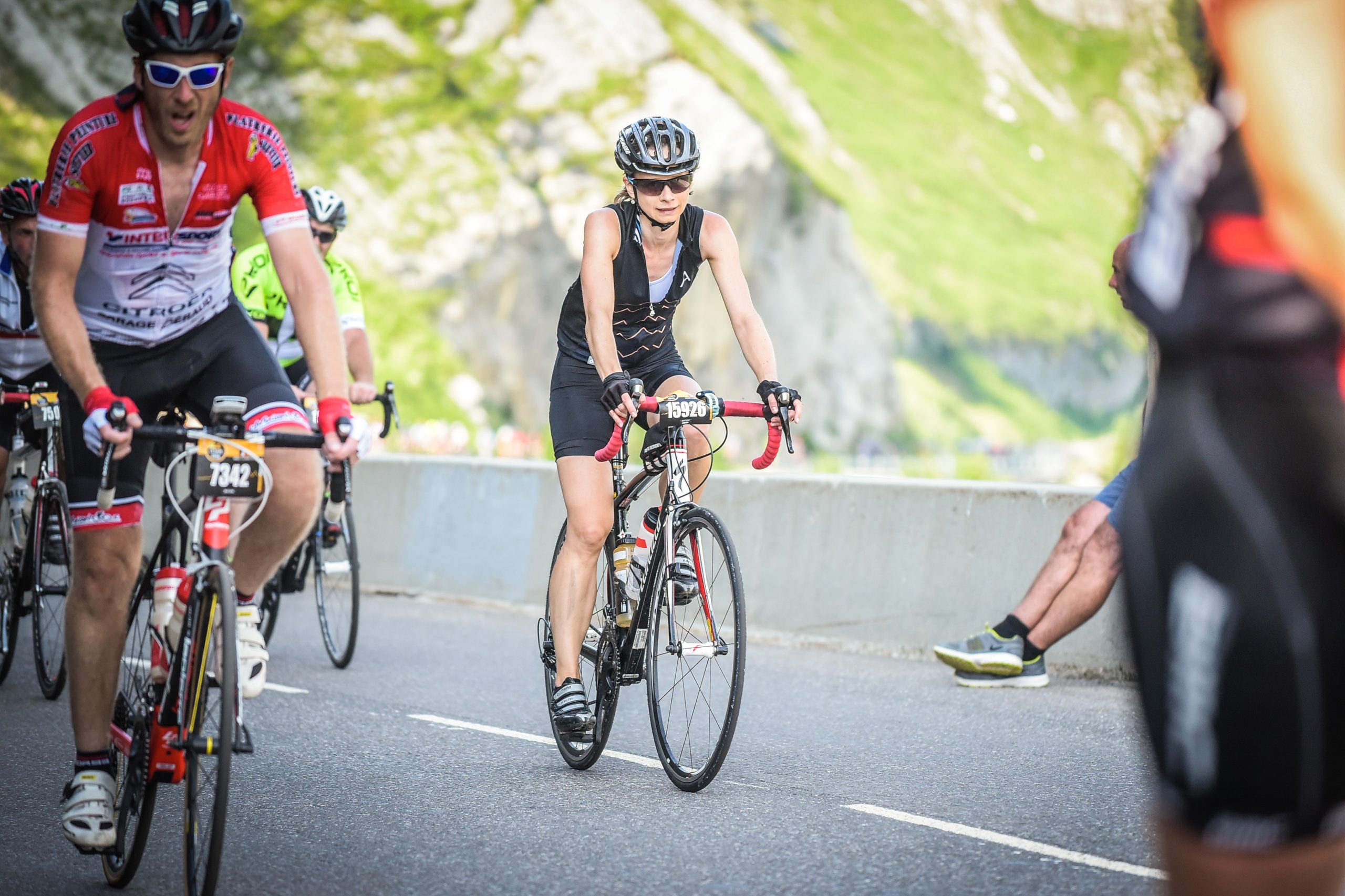 I have always cycled as long as I can remember. In Belgium the favorite national Sunday activity is going for family bike rides. The area around Bruges where I was born  is super flat so u can ride for hours without being tired and there are plenty of cafes and cosy bistros all over the country side. People go for a ride and hop from place to place to grab some apéro or lunch.

It’s also the main means for kids and teenagers to get around as Public transport is not that well organized. From small on you  just get used to cycle everywhere.

I got my first bike when I was 6. It was pink and have a little basket on the front. Just loved it. With my brother we were cycling around the neighborhood all the time and usually going to places a bit further out than we were supposed to. Sometimes I was just sitting (or standing) on the back of his bike, which twice ended in quite bloody accidents. Fortunately nothing  major was broken, besides my glasses….

When we moved to Geneva I kept the habit of cycling to school as much as possible despite it being much harder….I however ended using my pocket money to replace my nice pink bike with a secondhand mountain bike with gears. That made it way easier! Who cares about riding uphill when u have gears to do so!!

I used that new bike for couple of years but then grew out of it and for my 15 or 16th birthday my parents bought me a wonderful pink and purple Peugeot with a very nice basket (again!). I rode that bike EVERYWHERE. To school then Uni and then work. On the Salève (with the cable car…..!) and down la Croisette. In the Jura, to Giron and via La Joux down the col de la Faucille. Up to St Cergues. I did my first 100 km around the canton of Geneva on that bike.

And then one night it got stolen in Eaux-Vives. I was 30 and I cried for my beloved bike….I still miss it…it was the best city-bike ever…. i pushed it to its limits but it never failed.

In my late 20’s while i had never done much sport other than cycling around I became a running adding. 5km, 10km, half Marathon, marathon, trail-running. Passionate and unstoppable. By that time my Belgian cousin joachim has become a road cyclist and was doing well at local races. He was replacing his old Canondale with a fancy new carbon model. I bought his Canondale and decided to start cycling after the Paris Marathon in 2010.

My cousin took me for a ride and as did not know Geneva I decided the route….we ended up riding up the Salève via monnetiers and down cruseilles…..80km it so… Not bad for a first ride 🙂 my but was amazingly sore but I LOVED it.

By that time my knee did not let me run anymore…very bad news for a running addict. I missed it so much.

The endurance, the exhaustion, the satisfaction of ending a race. The only way to kind of relive that kind of emotion was to arrive on top of a col. So that’s what I did. And always a bit further or higher…

What is your greatest sporting achievement to date, and what are you currently training for ?

Biggest achievement has been to finish L’Etape du Tour 2018. Realizing I could train so hard and ride such a huge race made me super proud. But then coach Thierry told me this year it was not about finishing any more…I should go for performance. And I must admit I did quite well on the past 2 races I did: 1st woman on Strava for Lille-Hardelot (156KM  in North of France)no official times available) and 3rdwoman in my age group on the JPP (110km in Haute-Savoie) 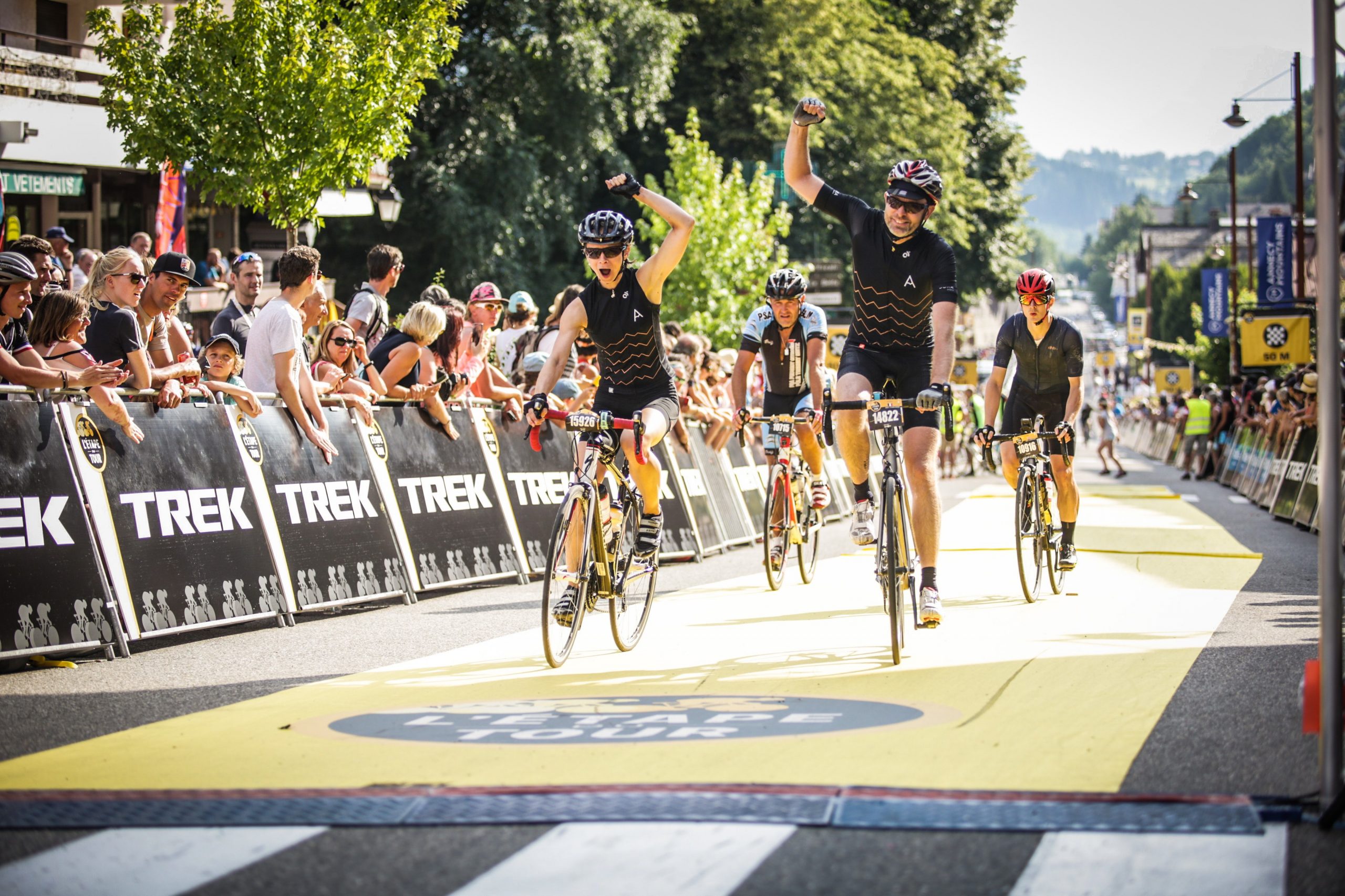 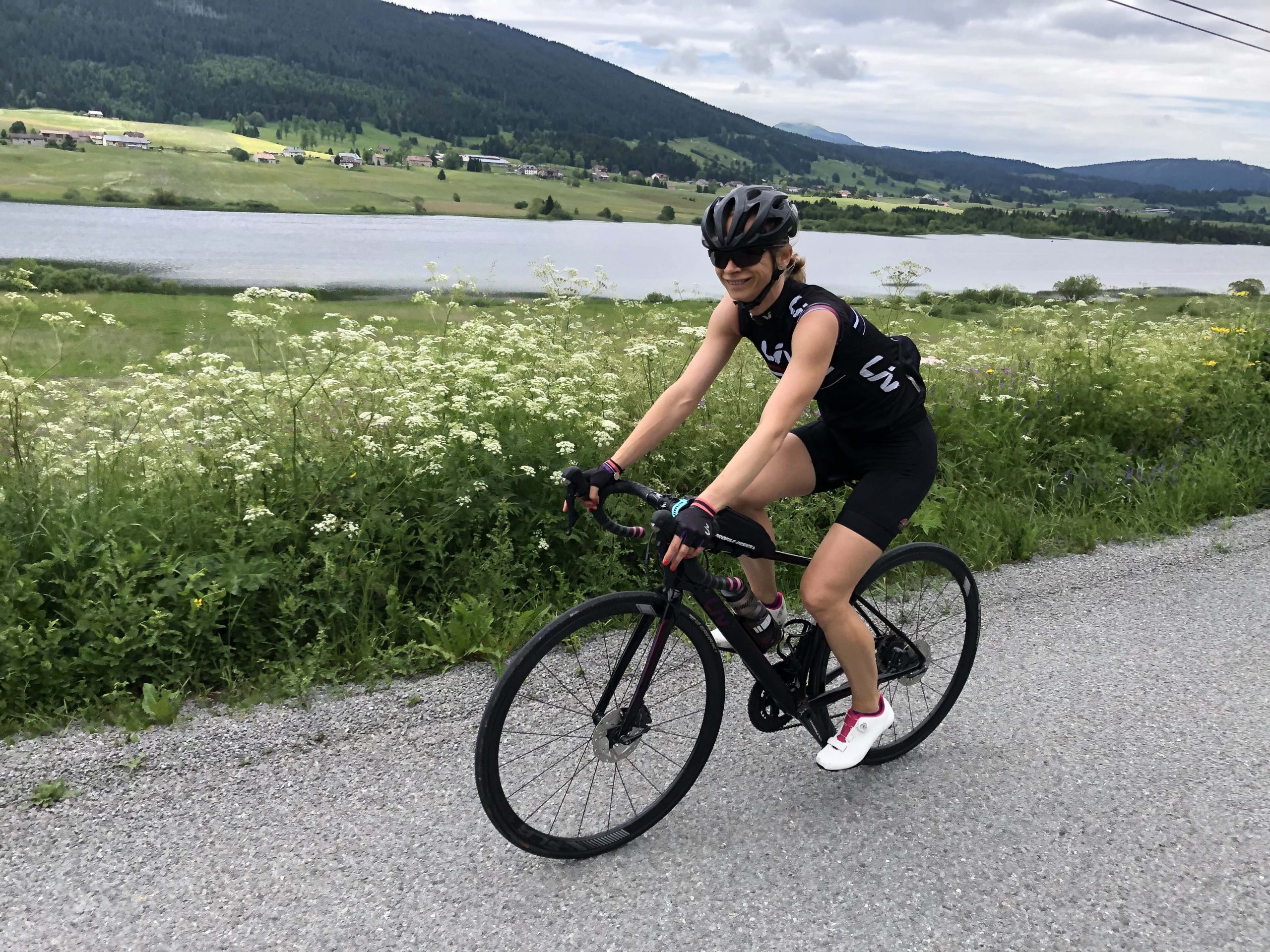 What are the biggest challenges you face when training or racing ?

For training my biggest challenge is TIME…I feel my life is so full…(we probably all think the same…!) between the2 small kids and work and  all the things I have of want to do…finding time for quality training is hard. And I actually only find this time when once I have signed up for a race. It amazing what discipline this gives you.

Where is your favourite cycling route or climb ?

I spend most of my time on the Salève because that’s so close to my house and very convenient. But the most beautiful climbs I did are in the Haute Savoie: the top of la Ramaz and the col de l’Encrenaz. The Jura has super nice climbs too such as la  Barillette and Baudichonne. These are however dead ends. 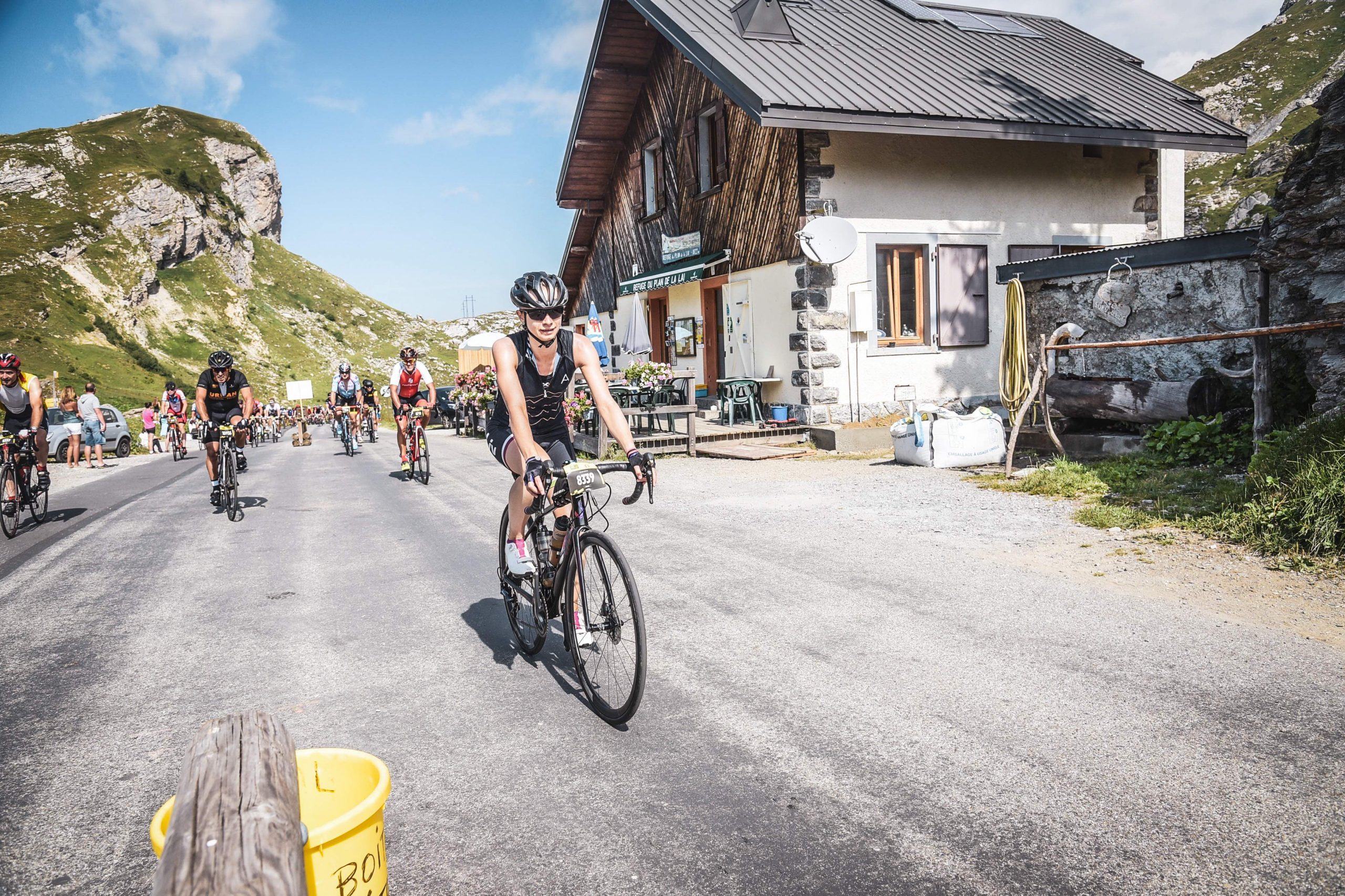 What is your favourite race/event ?

I actually have not done that many races….but what I absolutely loved at the Etape du Tour is that on that day u feel like a real Tour de France athlete. Passing that arrival line in 2018 together with my husband was the most amazing thing ever. Lets see if it will feel the same this year!

Where do you get your motivation from ?

It’s a combination of many things….

My body needs exercise and over the years I got addicted to endurance sports. I like to sweat and feel my muscles burn. Lying on the sofa reading a book or eating well and drinking a glass always feels nicer and tastes better after a run or a spin!

When I started cycling  (and its actually still the case) most of my cycling friends were male…and being able to keep up with the boys was always a great source of motivation. Now I often take them over (especially when we ride uphill…) and whenever that happens, it just boosts my legs to keep going!! 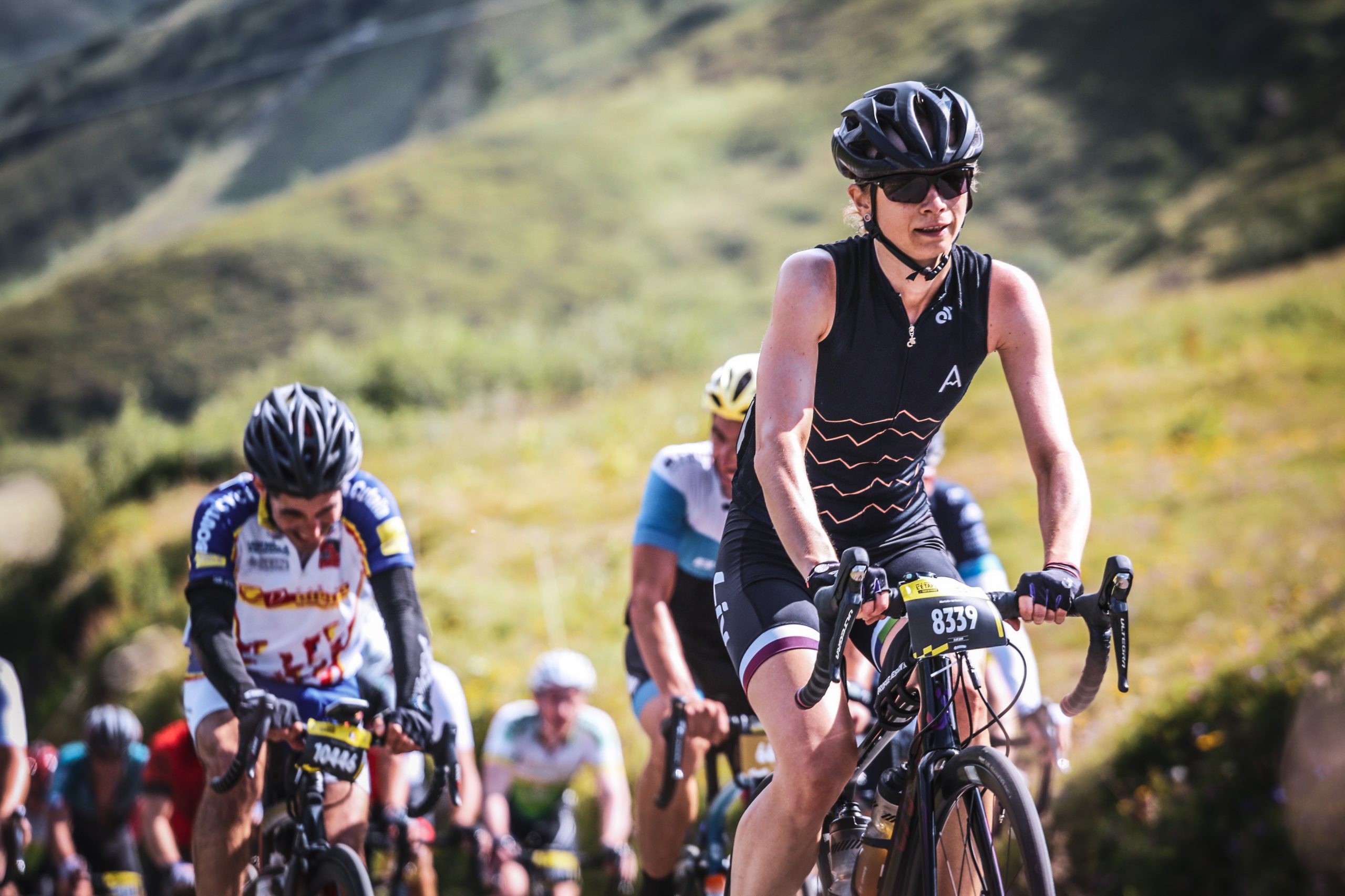 What is your pre-race breakfast/food and post-race recovery food ?

Before a race,  I eat a bolt egg, granola with yoghurt and a banana and on the start line Flapjack       energy bar

After a race I take a recovery drink, salty nuts and drink at least 1.5l of St Yorre sparkling water containing lots of minerals.

For my mental recovery I also drink a beer and or a Gin Tonic….because in the end, it remains all about the fun! 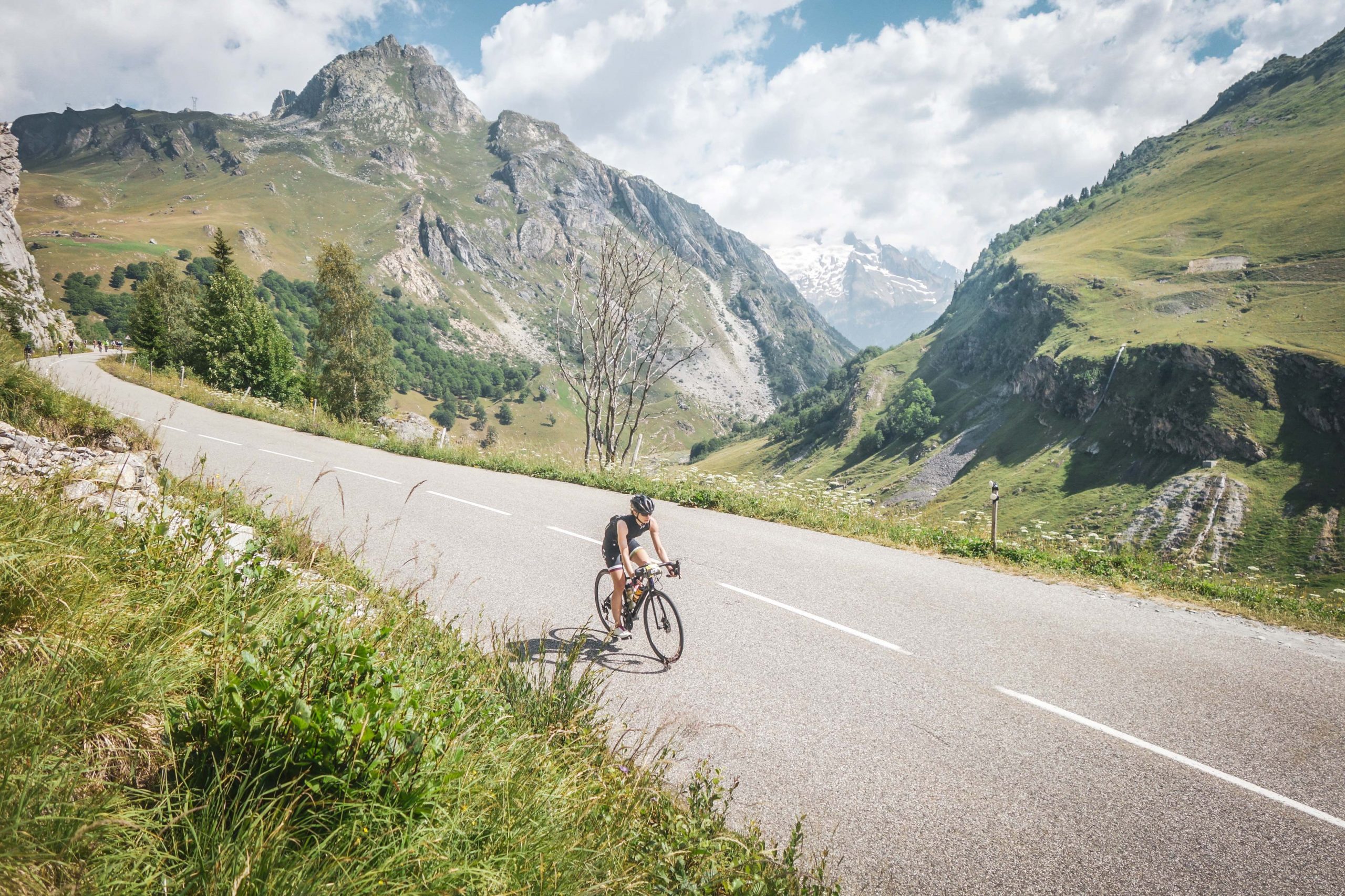 Since the interview, Isabel successfully completed the Etape 2019 in 9 hours and 34 minutes, 395th woman overall. She is now focusing on various other cycling events for 2020 as well as trail running races !