Diary of a happy girl in Kids Camp

Today I came to a camp called “Jura Kids Summer Camp” and we got this nice cap saying “Jura Sports”. There are three teachers called Thierry, Xavier and Nell. Next, we did a little exercise. We did jumping jacks and other stuff that makes you warm up. After that, we went biking around and we arrived at this mini forest. We had a little snack (bananas & nuts). Then, we continued biking to this big forest. We had our lunch and then we split into groups to make forts. We had to find wood from the forest and make it (obviously). My group is making a big fort and we are not finished yet. However, the good thing is that it stays there so the next day you can see if it broke or not and see if it was stable enough. Later, we came back; we went in the gym to play a game called “Dodge Ball” and some obstacle courses. It was a great experience! 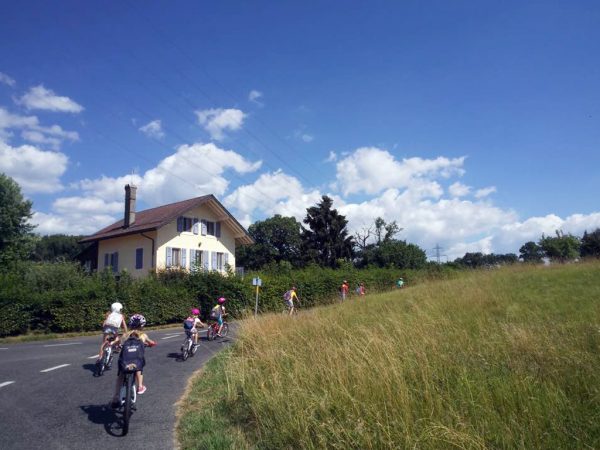 Today I came again to the camp (of course). In the the morning, we did a exercise (like every morning) and we did running this time. Next, we did a really fun game. They gave us a cup and we basically had to create teams (obviously). We had to put some water in a cup, touch a cone, do a mini slalom, go over an obstacle, do a bigger slalom and and put the water from the cup in a big bottle. The point of this game is to be the first team to full the whole bottle.

We played that a couple of times, and then we played another game that’s similar. We had to take a cup of water and you can just take your time. Then you need to do the obstacle course and put the water from the cup in the bottle again. All of the kids from each team had to go once and, at the end, we saw who had their bottles filled the most.

Later, we went for a bike ride and this time we went to Château de Bossey for lunch. When we finished our lunch (which took a long time), we split into three groups for three activities. The first was long jump, the second one was throwing a pine cone as far as possible and the third one was a group with tug of war, a bit of limbo and skipping ropes. Then we came back and we played tag, while the other group would do the same thing as I did yesterday (obstacle courses).

After we finished, we had free time while we waited for our parents. I did a miming game with all of the girls of the camp and Xavier (a teacher of the camp). It was an excellent day!

On Wednesday, we started the day with a running exercise. Then we were biking down a steep hill that was full of rocks to reach to a field for our lunchtime activity.
It was the most exciting thing of the day. We set fires for grilling! We went to the forest to look for stones and wood. We picked long sticks and sharpened them with a knife. Then we grilled sausages for lunch. They were delicious! Unfortunately, we couldn’t grill marshmallows because they are too sweet.

In the afternoon, we played a few games such as treasure hunt, speed running and we biked back to the camp. There we had a snack and we cleaned our bikes with a sponge of water and cleaning product. We dried them in the sun.

At the end of the day we went to the gym. We played an agility game of putting a golf ball on a spoon and slaloming through various obstacles. When every member of the team finished the activity, we needed to sit down. Then we needed to do the same but instead of holding the spoon in hand – we needed to put the spoon in our mouths.

It was another happy day in the Jura camp. 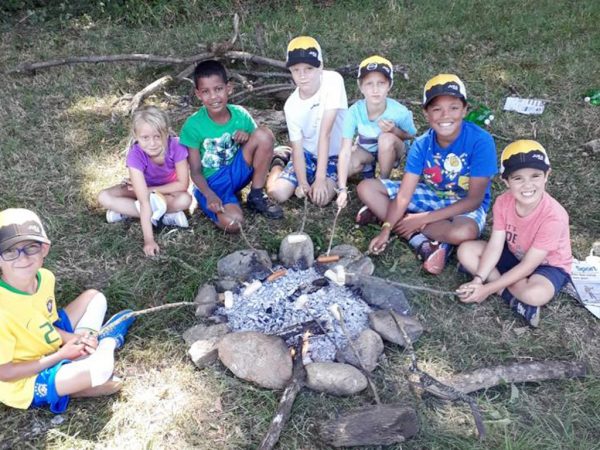 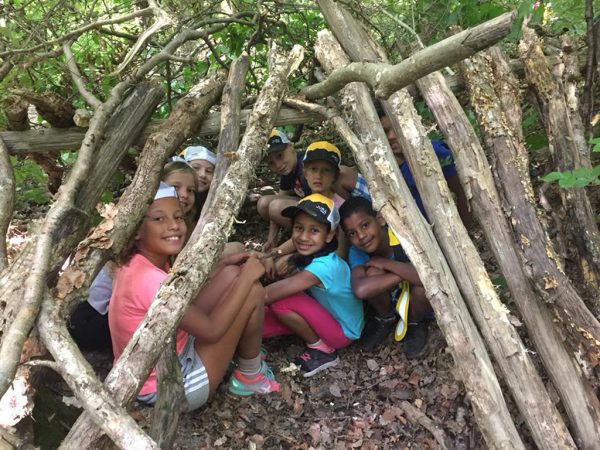 On Thursday, we went biking straight away. Remember when we went to the forest to make forts? Well, today we came again to finish them. But before that, we did a little tour. We finished our door and we added some decoration (leaves to make it look nice).

Next, we biked to the same place as yesterday where we made fires (there were still the marks). We ate lunch and then we did “Land Art”. We split into four teams. One team did a beach, another did an octopus, one did a human and my team made a house. Then we played a running game(like all the other days), and we biked back to the camp.

When we all arrived at the camp, we had a snack (bananas, nuts, apples & apricots). Then we had a water fight. Later, we played water games but with a different obstacle course.

Next, we did some stretching like: the cobra (it’s a type of stretch), the cat (you probably don’t now it by it’s name) and this type of stretch that really stretches you – the seated spinal stretch. Afterwards we had a choice between playing football or playing a miming game with Xavier (which I chose) while we were waiting for our parents to arrive.

This Friday, we did the Juralympic. There where 4 captains, Aika, Jack, Olivier and me. We all had a group name. Our name was “The monkeys of Greenland”, Aika’s team was “The tigers of Mexico”, Jack’s was “The tortoises of Switzerland” and Olivier’s was “The lions of England”.

We did two challenges in the beginning. One of them was a type of bowling and another one was a type of obstacle course that you need to time. Later, we did a group photo.

Then we went biking around and we got to a steep hill full of rocks. We went down this hill every day to get to the fields (but I’m not going down that hill again because I fell down). We ate lunch there and then we did an other challenge for the Juralympics. Remember when we did the treasure hunt? Well we had to try and remember every thing we had to find. That was hard! Afterwards we had to do another speed game (like we always do).

Later, we did one last challenge – we had to say the names of all children in the camp. Next, we had an aperitif. Thierry said an excellent speech and after that he announced the winners of the Juralympic. The winners were the lions of England. At the end, they gave us a nice certificate with the group photo on it.

This was the best camp ever!!! 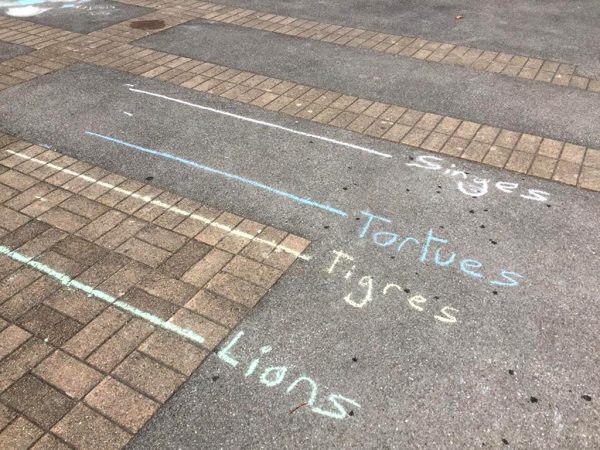 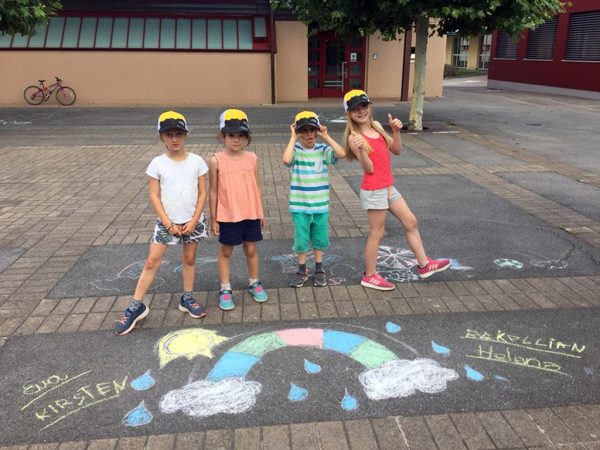 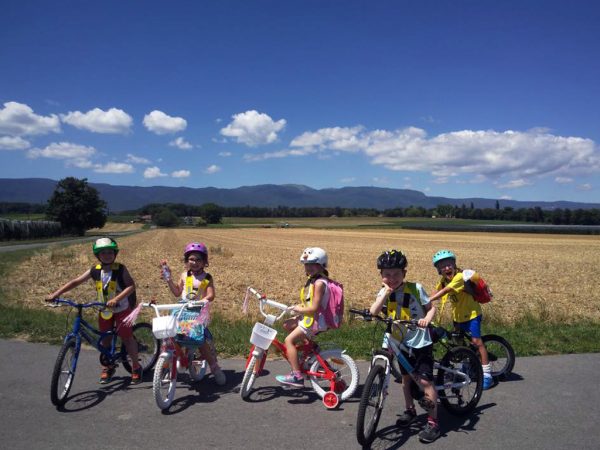 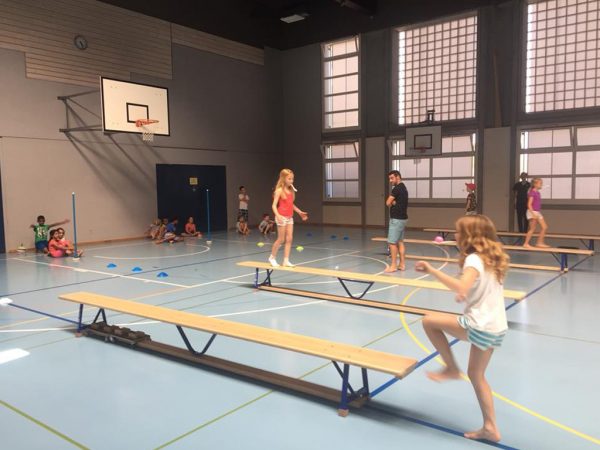 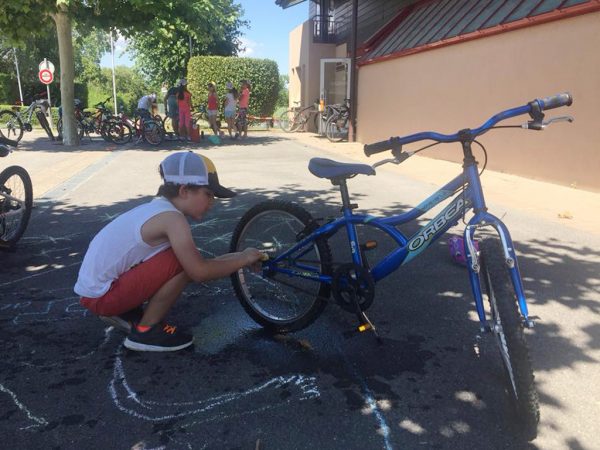 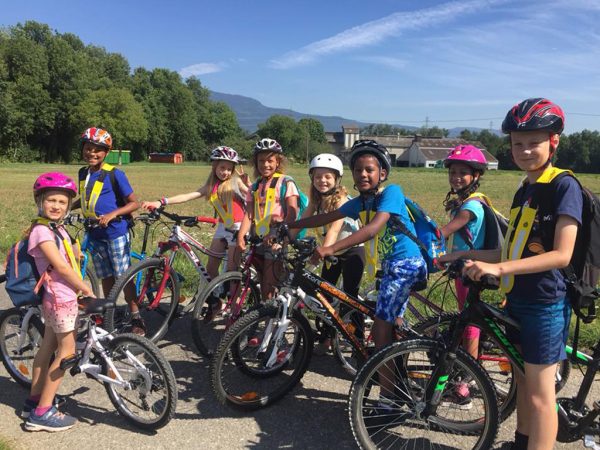 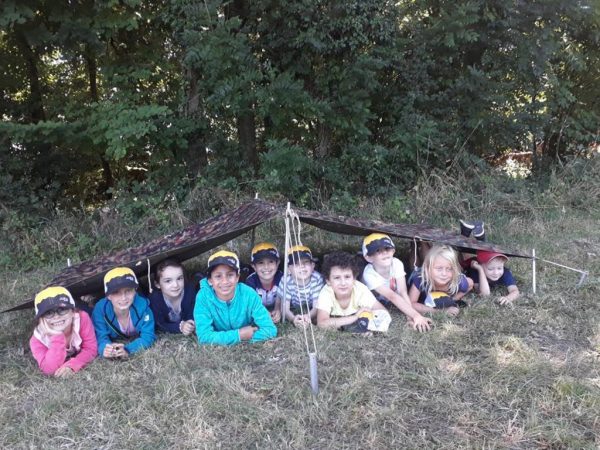